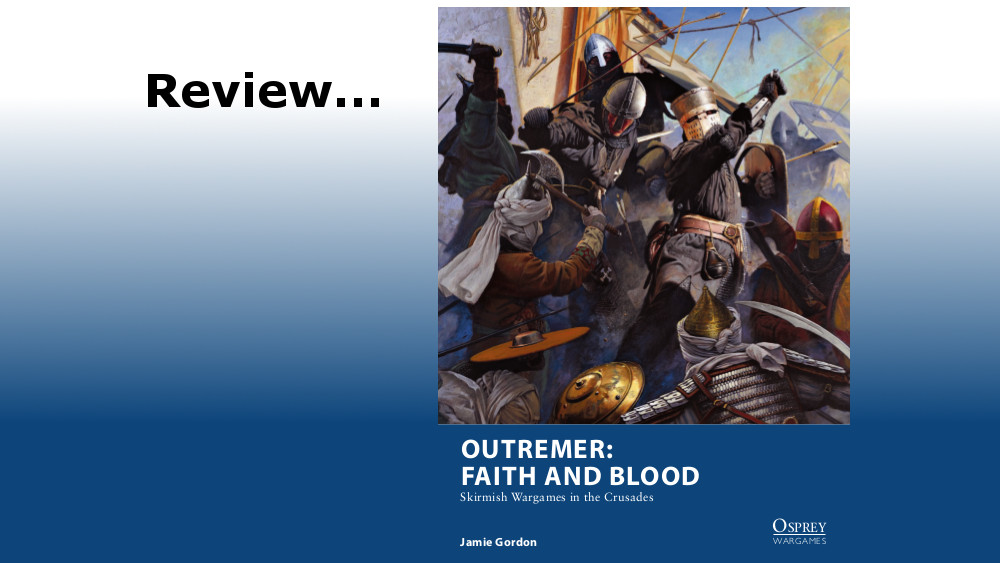 Osprey Games really impressed me with a Review Copy of Outremer: Faith and Blood. The game system is great, but I wish that it was set in a Fantasy or different Historical setting rather than the Crusades. That said, if you love miniatures games set during the Crusades, I would whole heartily recommend that you get this book so that you have yet another way to play with your miniatures for the low price of just $20.

Now let’s take a closer look at the system in our Review of Outremer: Faith and Blood.

What makes the system special?

On this Sunday’s Bell of Lost Souls article, I discuss the Campaign Rules of the game being the core of what makes this game special. That is true, but the game is also special in how it borrows RPG (Role Playing Game) elements (such as character progression and rolling non-standard dice) and is fast to play. Interestingly enough, d20s, d12s, d10s, d8s, d6s and d4s are all used in Outremer: Faith and Blood. Combat is brutal and furious once you get into the game.

In the game, there are three factions that you can recruit from. These factions include the Saracens, the Crusaders, and the Military Orders. Each has their own advantages and disadvantages. The game is typically played with 3 to 13 miniatures (per side) on a 4′ by 4′ table.

Once you decide which group to play, you start your warband. You get a set amount of money to hire your leader and his underlings. Do you hire a bunch of peasants, or a a couple of well-trained knights. These are choices you will have to make right off the top when getting into this game.

When you hire soldiers, there are a number of different options that you can choose. You can hire Peasants, Knights, Squires, and Initiates (Man of God). There are also plenty of other options that I did not list here. Each class comes with their own progression trees for how they level up. As they level up, they can select different career paths within their tree. This pulls in a very RPG type feel to the game and I like it!!!

As the characters gain experience, they level up, and every member in the warband gains experience. It is not just the “Wizard” like it is in Frostgrave. Each level, your miniatures can choose to take a roll on one of the skill (trait) tables that relates to their career (class). Below is a sample page of some of those trait tables in Outremer.

While I personally prefer not having randomness when it comes to character development, I am fine with the tables presented in this book.

As for how experience works, let’s take a look at how a hired Commoner advances in a Crusader Army. A Commoner starts as a Peasant and upgrades into a Pilgrim after a couple of levels. After the Pilgrim gains a couple of levels, they have a choice to make.  They may take the carrier path of a Trader, Levy or Apprentice. The Trader develops into a Merchant followed by a Master Merchant. Levies get yet another choice. They may become either Melee Militia or Ranged Militia. Melee Militia go on to become Sergeants followed by Men at Arms. Ranged Militia become Archers followed by Marksmen. If either Militia paths last long enough, they may end as Captains. Finally, the Apprentice becomes a Journeyman, who becomes a Craftsman, who becomes a Master Craftsman. Whatever path you take, there are 18 levels to achieve before you reach the top of the chart.

Each level, you get to roll for a single trait. For levels 1 to 7, Commoners are looking at gaining just basic traits. At level 8, they begin to get more selection in what skills to take. The Merchant can roll on either the basic traits table, or the Merchant Traits (pictured above). Likewise, a Levy that makes it to the Melee Militia stage may start taking either a basic trait or a melee trait when they gain levels.

If you don’t feel like leveling through the chart, you can hire characters at the Pilgrim, Levy or Militia stages of progression for your Warband.

Overall, I really like this approach and it reminds me of Role Playing Games (RPGs).

Leveling up your characters is just one aspect of a larger campaign system. In Outremer: Faith and Blood, you build a warband and grow it, but you also have to pay for the upkeep of your Warriors, Leaders and Horses between games. If you have money left, you can hire new warband members and buy new weapons, armour and equipment. Base creation / management is not a part of this game, but you can hire figures that become Journeymen and Merchants. The Journeymen in particular can gain traits where they generate an income if they sit out of the battles.

There is also a small balancing mechanism in the game to help out the “underdog” warband when there is a discrepancy in power levels between the two warbands playing in a skirmish game.

As for missions, there are six different missions to play and your downed characters can end up with permanent injuries.

As for when to end a Campaign, there is no hard and fast rule of when to stop. The suggestion in the book is to aim for a mutually agreed upon Experience Level or Reputation Score.

The core rules to Outremer: Faith and Blood are fairly simple and take up just 16 of 64 pages.

For activation, players use a deck of playing cards. Each miniature is assigned a specific card. These cards get shuffled and when one is drawn, the character assigned to that card gets to act. When activated, the miniature may take two actions and then the next card is drawn. Actions include Move, Hide, Shoot, Melee, Rally and Rest.

If the figure wishes to make an attack, there is a contest of dice. To hit with a ranged weapon, players roll the die of their shoot stat against a target number of “5” with bonuses and penalties applied. For Melee, the player uses their attack die against the opponent’s defense die (also with modifiers). If the attack hits, the attacker rolls the power die of the weapon against the “Toughness” value of their opponent. If you roll higher, you cause damage. That said, the opponent might get to make a saving throw if they are carrying a shield or wearing a helmet.

Of course there is more to the game than what is above, but that is the basics of Outremer: Faith and Blood. Some people might prefer a more complex game, but personally, I really like the rules presented in this book.

As many of my readers know, I do not score games. The reason for this is because what I find as a positive, you may find as a negative. What one person likes, another may not. As such, I find scoring games highly subjective. What I aim to do is to let readers know what the game offers. This should help readers decide if the product is right for them.

Again, the Pros and Cons are subjective. I realize that people will have different views than me, and that is okay. Hopefully after reading this review, you will have a better understanding of what Outremer: Faith and Blood is and can decide if it is a game for you.

I am really impressed by the character development in Outremer: Faith and Blood.

I think it is really cool that this game pulls off the feel of the game I tried to develop whey I was young. Before my knowledge of miniatures games, I would adapt Dungeons and Dragons rules into miniatures skirmish games. So for me, this gives me a walk down memory lane as I read the book and think to myself “this is the game I wanted when I was a kid!” Nice work Jamie Gordon!

Sadly, I would prefer a different setting. The Crusades are just not really my thing. I think it would be awesome if Osprey re-themed these rules into something Fantasy based or set in a different Historical era.

That said, if you like gaming in the Crusades setting, look this book up!!! For just $20 it gives you a great new way to use your old miniatures (or an excuse to buy new ones). Being that it is a small model count game, this one won’t break the bank!

Hopefully you enjoyed this review.

Disclosure: Osprey Games provided Must Contain Minis with a Review Copy of Outremer: Faith and Blood.