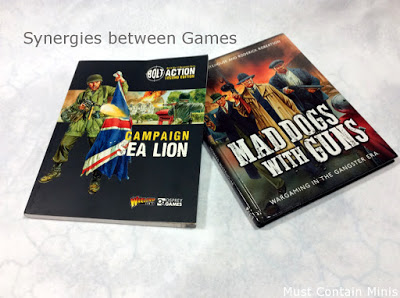 Many readers will have noticed that when I look at games and their components, one of the questions that I ask myself is whether I could reuse the components from one game in another. The reason for this is simply because I love to play many games and buying into multiple systems at once can be prohibitively expensive for someone on a budget.

When Osprey Games sent me Mad Dogs with Guns, I looked at it and Bolt Action: Campaign: Sea Lion and instantly noticed that both games could use the same miniatures. Even though the settings are different, what constitutes a unit in Sea Lion could easily count as a gang in Mad Dogs with Guns.

With the price of weapons in Mad Dogs, it is likely that your starting gang will be armed with mostly melee weapons, hidden pistols and a small handful of rifles or shotguns. It is also likely that your starting gang will number somewhere between five to nine figures depending on how heavily you arm them. Of course, there are options to take more, but if you do so – they will mostly be equipped with just melee weapons.

Various groups from the British Local Defence Force and German Fifth Column carry similar armaments in Campaign: Sea Lion. For the British, either the Militia or Water Patrol units could double well as gangsters in Mad Dogs. If you maximize the number of defenders in an inexperienced Militia unit, you will have 14 men, of which only 6 are armed with guns. The others will carry improvised melee weapons. Likewise, the German aligned British Union of Fascists (BUF) and Gangsters can carry weapons in similar quantities.

While the gangs above do not carry Tommy Guns, the Headquarters unit from the German Gangsters can carry sub-machine guns. One could also model the British Home Guard in civilian clothes giving them access to heavier weapons that you may like to have in Mad Dogs.

Personally, I really like that the figures from one book are close enough that they could be used in the other. I honestly wonder a little bit if this was a calculated plan on Osprey’s part to help each book out with the success of the other. Not a bad plan if it was on purpose.

So far, I have bought 16 figures that I plan to use in both games. The first set is a group of 6 Investigators and Cops that I bought from RAFM (Pictured Below). The second set is the new British LDV Section box by Warlord Games.

For those wondering, Mad Dogs with Guns has many beautiful pictures in it of miniatures by Copplestone Castings (Distributed by North Star Military Figures) and Pulp Figures. I believe that those minis would also be perfectly acceptable for Sea Lion as well as Mad Dogs.

Do you consider whether you could use your miniatures in multiple games when you buy them? Please leave a comment below to tell me your thoughts on looking for synergies between games.