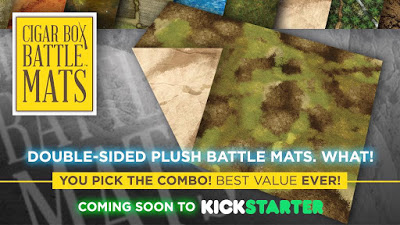 Here at Must Contain Minis, we make it no secret that we really like Cigar Box Battle Mats. I have a couple of their mats and really like the product.

I have also used their mats in a number of Battle Reports and they look great. Below is a list of those reports with brackets around the name of the mat used.

All of these mats are stunning and people really like to see them out at gaming conventions and clubs. Now, the Cigar Box Battle Mats offer a number of advantages over their competitors including being able to place terrain under them to seamlessly create hills and being able to fold them up into a backpack or letter carrier bag. Below are some pictures of me creating a hill and using Cigar Box Battle Mat as its cover.

I really like the trick above and you cannot do that with the materials used by many of their competitors.

The mats that Cigar Box Battle is bringing to Kickstarter are slightly different than the ones above. That said, all of the prints in the links above should be available through the campaign. How the Kickstarter mats differ is that they are Plush and Double-Sided. That’s right, Double-Sided!!!!

This means that customers get double the mat with just a single purchase. I am a fan of that idea as I tend to be a budget minded gamer. I hear some people already grumbling that this makes their current Cigar Box Battle Mats obsolete. It does not. The Kickstarter is a limited run campaign and, at this time, they are not planning to make the double-sided plush mats as part of their normal catalogue.

The guys at Cigar Box Battle have already been very busy previewing their products for the web. Below are some of their videos about the upcoming Kickstarter product. My favourite videos are numbers 2, 3 and 5 as they best demonstrate Cigar Box Battle Mats’ competitive advantages over the competition.

Again, this Kickstarter starts on August 1st (2017), so be sure to check out Cigar Box Battle Mats for these exciting new double-sided products! I believe that as the campaign goes along, we may see new designs released, and that is super cool!