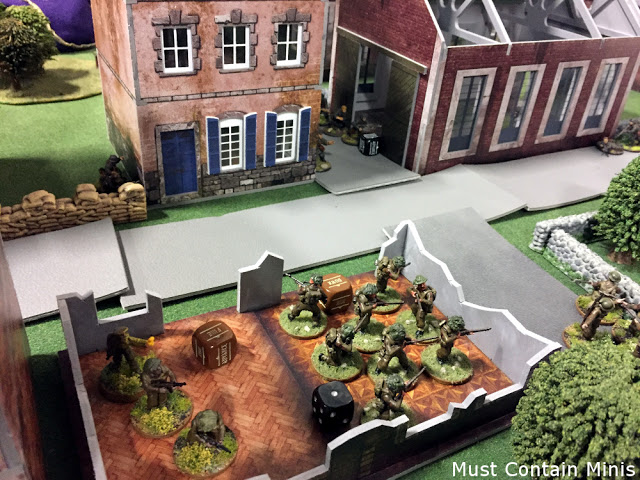 Check out this action…

In the scene below, we have three groups of British infantry holding on valiantly against multiple German troop units, a medium machine gun team and a flamer team. The situation for the Brits is desperate – but this is not where the battle started.

Before my buddy Dave arrived, I set up the table a little too sparse. The table actually resembled something better for a game of Warhammer or Tank Wars than for Sea Lion. Once Dave arrived, he immediately questioned the lack of terrain and showed me the suggested scenario map for “Capture a Port” on page 107 of the Bolt Action: Campaign: Sea Lion book. He was right, the book showed much more terrain than what I set up. A few minutes later and we upped the building count by five and added in more soft cover and terrain features. What a difference both strategically and aesthetically.

In the scenario to come, the British would be defending one of their port towns against an invading German army. Because this is a Sea Lion Scenario, this is a town actually on Britain shores.

We decided to use the optional rule “Command & Control Breakdown” for this mission. With that rule, one unit must be left either Down or in Ambush from one round to the next. In each subsequent round, that number increases by one. This is to represent confusion in an urban combat environment.

The British Player (me) brought a Regular Infantry Army while the Germans (Dave, and Aaron for part of the game) brought a Beach Landing Force.

For deployment, I set up my troops in three basic areas. I had the bulk of my force in a warehouse out of immediate harms way. I then set up one of my carriers and an MMG (medium machine gun) team to overlook the middle of the table maker. This way I figured I could get a shot on Dave’s troops if they ever crossed the line. My final group of guys, I kept in reserve.

Dave decided to start with all of his forces on the table. He set up his forces for a basic two prong attack.

Not pictured above is that Dave placed the aircraft spotter in the top of the church bell-tower. I drew the first activation dice, moved my small mortar team forward and fired off some smoke aiming to block the StuG’s line-of-site. The smoke missed its mark, but the Germans had a new primary target to take out. I couldn’t believe how much fire that poor light mortar team attracted after this moment.

I personally, was very surprised with how fast troops on bicycles move. Dave’s forces were on me in no time. Below is how the field looked after the end of the first round.

Now Dave made a huge error on his first round. He did not declare anyone down or in ambush while I had left a couple of teams in ambush. This meant that I could choose a unit of his to be down for the next round. My choice, his StuG.

For those wondering why Dave held his air-strike, he was waiting for a more opportune time. Unfortunately for him, that time would not come. When I asked about why he didn’t call in a strike on the first round, he stated that it was because he moved his bicycle guys in a little fast and he did not want to hit his own guys with the air support.

At this time, both sides were feeling desperate, and both Dave and I felt like we were fighting a losing battle. As a reminder, we had the “Command & Control Breakdown” rule in effect so each round we were both losing teams to activate due to the confusion of a city fight.

Dave managed to take out one of my Bren Carriers and then started targeting the second one. Was I ever feeling nervous!!!

The assault pictured above was the last action of the game, and it changed the outcome of the game. Instead of being a German Victory, it was now a Draw. The Germans killed more units, but the British occupied three quadrants of the table while the Germans only had two. Once the points were tallied, it was an 8-8 draw.

Despite ending in a draw, we had a great time playing this game of Bolt Action: Sea Lion!!!

I would like to send out a huge thank you to Forbes Hobbies in Cambridge, Ontario, Canada for providing us with gaming space and allowing us to take pictures in their store. The table that you see below is set mostly with their scenery and it makes a huge difference when you play on such beautiful tables. What a good experience!!!

If you live in South Western Ontario and are interested in Bolt Action, I encourage you to visit this store sometime. The store carries stock of Warlord Games‘ Bolt Action and Test of Honour, along with games by other manufacturers. Forbes Hobbies itself is within a 1.5 hour drive of Niagara Falls, Toronto and London. If you want to get a game in, be sure to call them before coming out.