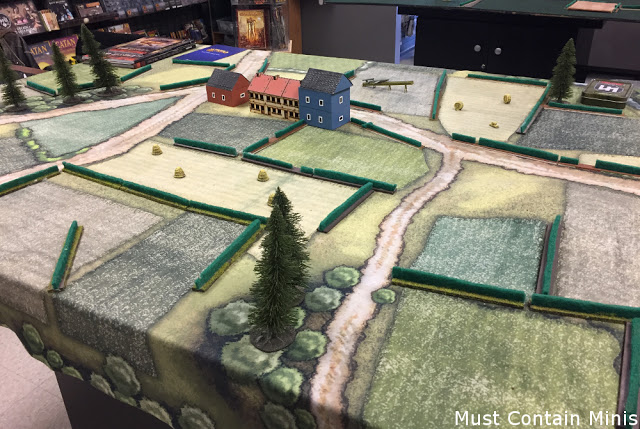 This is the second Battle Report in my three part series from the tournament at Phoenix Games. This time, I took on Brenden – the tournament organizer. He played Americans and faced my German list. What a great looking table!

Most of Brenden’s forces were held in reserve.

At this time, the true turn limit condition was reached and our match was done early with a 6-1 German Victory.

Looking at how things went, there were a couple of things that Brenden could have done differently. The first is in List building. His list could have done better with more mobility and more anti-tank assets. The other thing is that if his infantry had of assaulted my “Move at the Doubled” StuGs on the first round, this would have been a very different game. Losing a full StuG platoon to paratroopers would have been a devastating blow to the German forces.

Brenden’s list did have a plane to help provide anti-tank capabilities, but the German Wirbelwinds were 100% effective at providing anti-air support. The planes never got past the umbrella of bullet fire.

This was the second in a three part battle report series stemming from the Flames of War Tournament that I attended at Phoenix Games this past February.