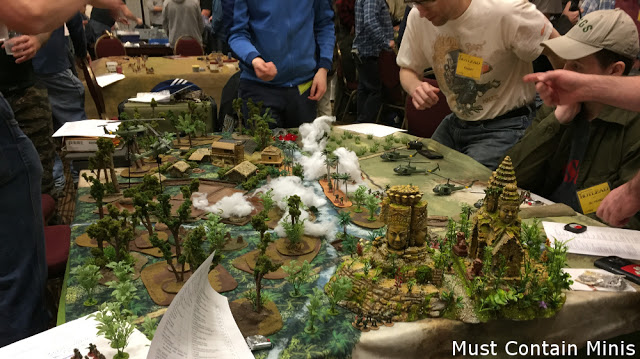 Hotlead is an event that I look forward to every year. Last year I missed it, but this year – I attended and ran two participation games of Frostgrave. I will write about the Frostgrave games later, but suffice it to say, they went well.

Every year, I am impressed with the number of people at Hotlead and the quality of Game Masters. James Manto really manages to attract great talent to the event and this year was no different. Check out these pictures of Hotlead 2017!

Elsewhere, we had a group of guys playing Bolt Action on a Stalingrad Table.

Aside from games that I am already very familiar with, there were a number of other games going on at the convention. Below are some pictures of those other games. For the most part, I am not sure what rule sets these are, but the games look cool. Please feel free to fill in some details in the comments area of this post.

While a large portion of the games at Hotlead are Historical, games of other varieties hit the tables too. In a different room, there were GW games being played. I did not get pictures of those games though. Around the main hall, there were plenty of cool games including X-Wing, Road / Kill, A Homebrew Heroes Game, BattleTech, and my own Frostgrave game.

Update: Since the original publication of this article, I wrote up a Battle Report for the above game.

Not really related to participation games, but still very cool was a booth ran by a local gaming group looking to recruit players. The group is Ontario Hobbit Adventures and check out their displays. Beautiful!!!

Overall, I had a fantastic time at this convention. I knew I would though, because I always do. 🙂

Aside from plenty of awesome participation games, there were a number of vendors at Hotlead, including some of my favorites (J&M Miniatures, Six Squared Studios, RAFM and a buddy selling off his old Flames of War stock). Unfortunately, the event conflicted with Adepticon so my friends from Crucible Crush and Pulp Figures were not on hand this year for Hotlead. Perhaps I will see them again later at a future convention.

There was also a very large bring and buy table. I was looking for boats for use with the “Island” setting Frostgrave slated to come out in the fall. I found some there, but they were not in my budget so I passed them up. Too bad. They were nice.

What I did end up buying was a Paint Bottle Holder by Six Squared Studios, some American Airforces Blisters for Bolt Action from J&M Miniatures and some Gale Force Nine clearance items from my friend Hal’s Booth.

Thanks goes out again to James Manto for running this fantastic annual event! Before signing out, I would like to give a quick shout out to The Mad Padre. I saw you at Hotlead, but I was so busy with my gaming table that I was unable to chat.

Until next time, Happy Gaming Everyone!!