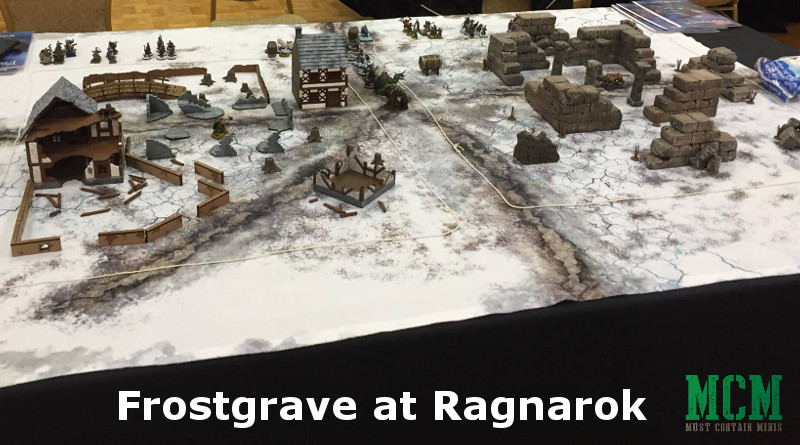 One of the things that I love to do is to share games and teach others to play. This year, I took Frostgrave on the road to three separate conventions. You may have already read my first article of Frostgrave at Hotlead 2019. Today’s article focuses in on Frostgrave at Ragnarok in Waterloo, Ontario, Canada.

Ragnarok 2019 is a brand new event in Waterloo, Ontario. One of the organizers connected to SkyCon went out and started his own convention. The turn out wasn’t too bad, especially considering that it is a new convention at a new location. Like SkyCon, this one focused on Board Games, Miniatures Games and Role Playing Games (RPGs). They even had a group of LARPers there.

I had a good time at this one catching up with friends that I haven’t seen in a while. I also got in a game of Gaslands in on top of running Frostgrave Demo.

Of all the conventions, this one has been the most convenient for me to attend so far. Hopefully they run the same event at the same venue again next year.

At Ragnarok, I discussed Frostgrave with a few people passing by. One of those people wanted a demo that I was more than happy to provide. In this game, I actually played as one of the players. Although, I played the game a lot, sometimes you just don’t have the luck. My opponent, Carl, rolled a lot of natural “20’s” (Critical Hits – almost guaranteed one hit kills).

My opponent played as the Dwarven Thaumaturge. Me as my normal Necromancer (The Man with No Name).

Carl plays a lot of miniatures games so he understood the gaining up and cover elements immediately. For a beginner, he exemplified sound strategy. You can see he traveled his soldiers in groups and made constant use of his heal spell.

By mid-game, the control of the treasures changed significantly. Carl took the lead from me.

And that is how this story ended. My Wizard and Apprentice retreated off the table as the lone survivors of the group (the Zombie does not count). For Carl’s first Frostgrave game, he did extremely well. Again, rolling many critical hits (natural 20’s) helped with his success.

As mentioned above, Carl did extremely well with his first play through of Frostgrave.

I had a lot of fun with this one. All of the natural 20’s he rolled really made things exciting. I don’t worry too much about whether I win or lose, so I had a blast.

It was also great to chat to people that came to the table about Frostgrave and the products on the table that help make my demo look so good. For anyone that has not tried Frostgrave, it is a great game at a really good price. Best of all, you can use whatever miniatures you own.