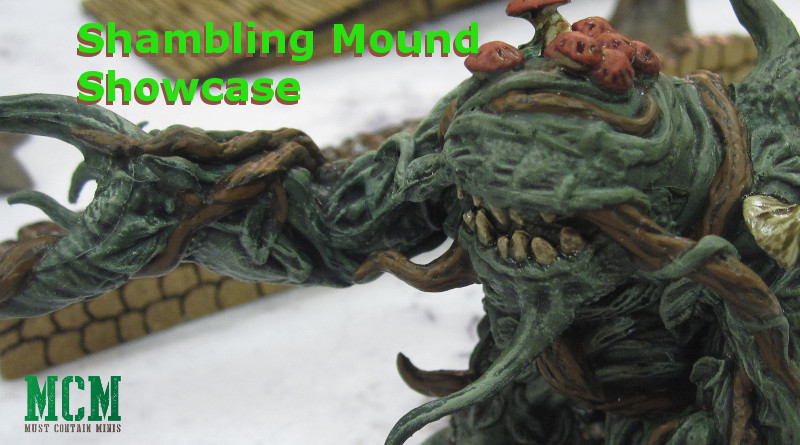 In this post, I showcase the Dungeons and Dragons’ Shambling Mound Miniature by WizKids Games. This miniature comes unpainted, but primed. Dave Lamers painted this miniature in this post. If you like his work, you can reach him by email for commission work.

Now let’s take a closer look at the Shambling Mound.

In Dungeons and Dragons Shambling Mounds are rotting heaps of Vegetation. These mounds engulf their victims and strangle them to death. If you encounter one, do not cast lightening on it. It absorbs lighting and regains a small amount of hit points from the attack. That is the opposite of what you would desire if you met one.

In our game of Frostgrave, we used it as a Snow Troll.

I tend to find that the WizKids Games Dungeons and Dragons Miniatures scale well to 28mm to 32mm gaming. Below is a look at the Shambling Mound beside an official 28mm Frostgrave Miniature (kit-bashed with a Mantic Miniatures kit).  🙂

Hopefully you enjoyed this quick post about Dave Lamer’s Shambling Mound miniature by WizKids Games. Thanks goes out to him for allowing me to borrow it for the game I hosted at Ragnarok. The model looks pretty good and Dave went even further than allowing me to borrow the mini. He happened to have a second unpainted Shambling Mound miniature that he gave to me. Thanks so much for adding to my collection.  😉