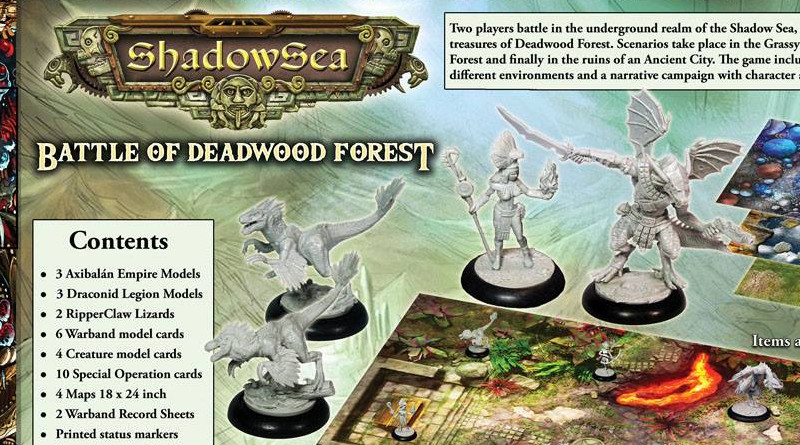 Two player starter sets for miniatures games are something that I love. They give you enough figures and rules to give you a taste for a game and help you decide if you want to pursue the system further. Many years ago, the only starter sets I would know about would be those by GW. At this point in my miniatures journey, I know there are so many other options out there and today’s post shows yet another starter set for another game. This time, I am taking a look at the game ShadowSea by AntiMatter Games. This is the second game by the company that we have looked at. The first was DeepWars: Battle for Diablo Reef.

As a note, all of the images in this post are from AntiMatter Games’ Facebook Page and used with their permission.

ShadowSea takes place in the same 17th century alternative world as DeepWars. They exception is that explorers go even deeper into the underground seas to find caverans to fight in. Scientists and fortune hunters take their submarines down and depart from them to search for even more treasure. AntiMatter Games based this game’s engine on the same set of rules as DeepWars. They use the Song of Blades and Heroes ruleset by Ganesha Games as a starting point for the game.

The rules happen to be the same as those for DeepWars and the two systems are fully compatible if you wish to mix things up. This box should be now arriving to Kickstarter backers and should be available in retail a little later on (July 1, 2019, for orders). I believe that they will be going for roughly $69.99 American each.

Now, let’s take a closer look at more of the pictures.

At its simplest conceptual level, ShadowSeas takes the rules of DeepSeas underground. In these underground caverns, you can encounter creatures and opponents of all sorts. Below is a picture of the art work from the back of the ShadowSeas: Battle of Deadwood Forest box. This image shows what people can expect in the package.

I must say that I love the look of those RipperClaw Lizards. Here is a closer look at the two that come in the box.

AntiMatter Games also has a preview photo of the Lizard Men (Draconid Legion) miniatures in the starter.

The other faction in the starter set happens to be a group of Amazon Warrior type figures. I have not seen the preview image for them yet on Facebook.

Update June 22, 2019: It turns out that there are preview images of these models on AntiMatter Games Website. Below are those images.

Expanding on the Game

After you get the starter set, you can try the game out and see if you want to take it any further. You can increase the size of the forces from your starter set, or try another faction all together. AntiMatter Games currently offers 8 factions in ShadowSeas. One of those factions happens to be the Dark Mariners from DeepWars. My feeling for those models is that you can easily use them for either game.

If you are interested, be sure to check out AntiMatter Games’ website so you can choose out your favourite models.

Hopefully you enjoyed this quick look at the ShadowSea 2-Player Starter Box by AntiMatter Games. If you haven’t already checked it out, make sure you also look at my preview for DeepWars: Battle for Diablo Reef. Lot’s of cool pictures an information in that post too.