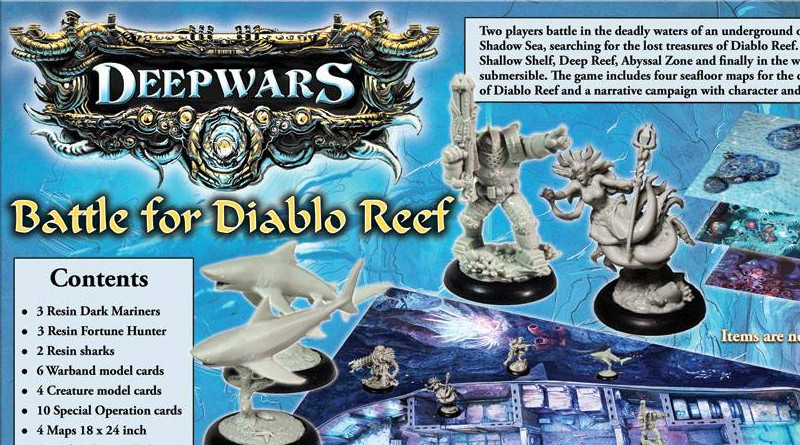 One of the things that I love about miniature gaming is the number of options out there. You are not limited to just GW, PP, or any of the other popular publishers. There are so many other options out there. Today, we take a look at a new two-player stater set that is about to hit the market called DeepWars: Battle for Diablo Reef by Antimatter Games.

As a note, the images in this post are from Antimatter Games and used with their permission.

For those that don’t know of DeepWars, it takes place in an alternative history late 17th century world where scientist discovered a lost land in an underground sea. You choose a faction and send your members down there in search for ancient technology. There are four distinct factions in this game, and two of my favorite looking groups come in this stater set. Those factions are the Fortune Hunters (the Human faction) and the Dark Mariners (a group of telepathic and tentacled beings).

The starter set should arrive to Kickstarter backers in late May and hit the market in June or July for the rest of us. Antimatter Games set its price for $69.99 American.

This box looks really cool to me and I am hoping to get a look at one of these boxes in the future.

Rather than listing what is in the box, let’s take a look at the back of the package. Below is the back artwork for the starter box.

The game comes with two factions each with three miniatures and two wild shark miniatures too. I don’t know how the Sharks get involved, but I am liking the look at what is in this box. Searching Antimatter Games’ Facebook Page, I found even more preview pictures of what is in the box. Below are those images.

Overall, it looks like a really cool boxed set and I like what I see in the preview images so far.

Expanding on the Game

Antimatter Games designed the starter set as a fully playable game. If you buy just a few more miniatures, you should have a viable force for a standard level miniatures game. Looking through the Antimatter Games website, I found a few interesting images to share of the other factions and available terrain.

Hopefully you enjoyed this quick preview of the DeepWars: Battle for Diablo Reef Starter Set. This game looks really cool. It reminds me of one of my favourite video games from when I was younger (X-Com: Terror from the Deep). This upcoming release certainly caught my interest.

How about you, does this game interest you?

For information on another related game, be sure to check out my post for ShadowSea: Battle for Deepwood Forest.