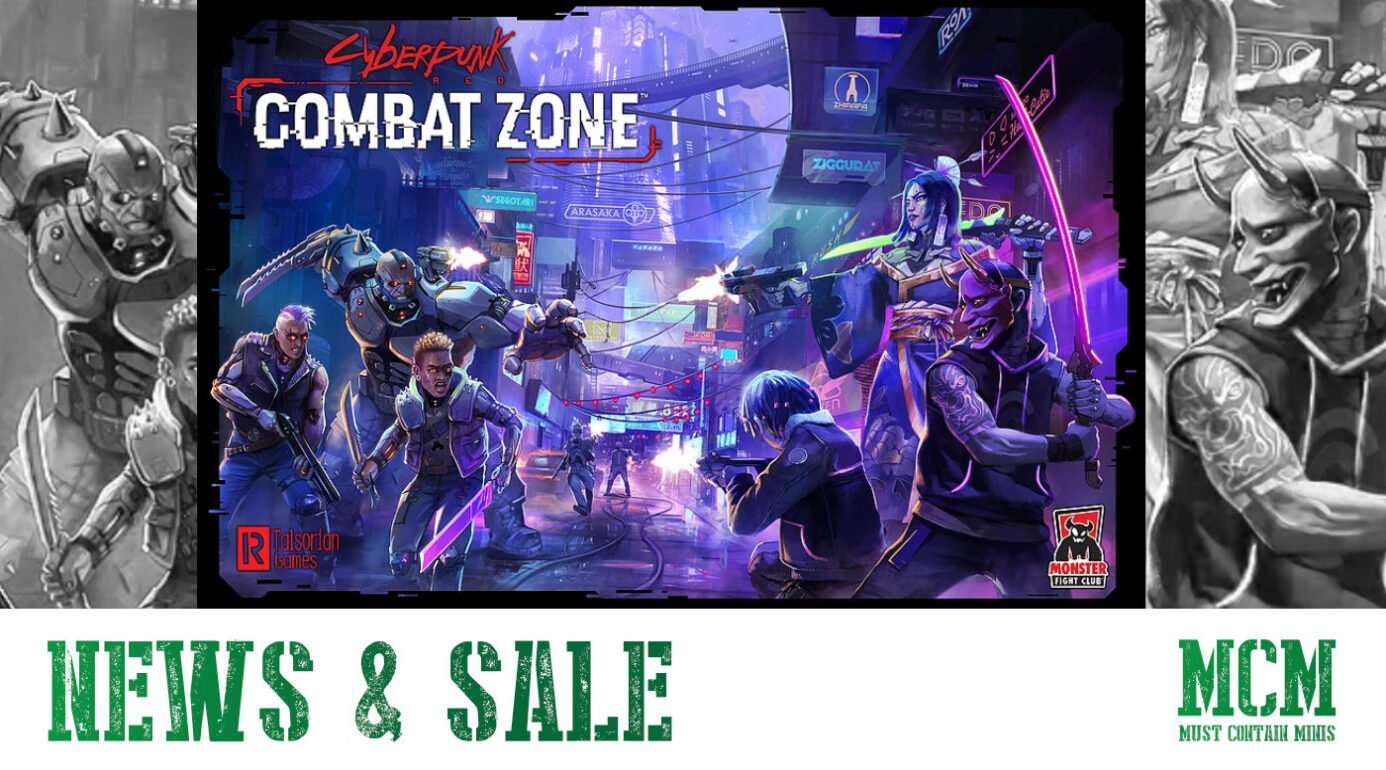 In this post, I share with you the news from two separate companies about Cyberpunk Red. R. Talsorian Games and Monster Fight Club Team up to announce a new miniatures skirmish game called Cyberpunk Red: Combat Zone. On top of this, R Talsorian also teamed up with Humble Bundle to sell their RPG books at a deep discount.

Let’s start with what excites me most, Cyberpunk Red: Combat Zone.

I got my hands on a few of those miniatures for review earlier. They look amazing and paint up really well. To get ready for these minis and the new game, check out my posts about the figures and how awesome they are. They look superb!!!

As you can tell, these miniatures are very appealing! Now, let’s see what Monster Fight Club has to say for what we should expect.

The Announcement on Monster Fight Club

In the time of the Red, every city has a combat zone: an area of the city where the law doesn’t reach and cyber-enhanced gangs vie for control over the streets

Cyberpunk Red: Combat Zone is an exciting new skirmish miniatures game from Monster Fight Club, set in the Combat Zones of 2045’s cities. Take control of a team of Cyberpunk characters who are looking to make a name for themselves.

Combat Zone features a new, fast-paced game engine where the players can act and react in organic, free-flowing actions. No rounds, no turns – the game just goes. As your characters take hits and get wounded, their abilities degrade – so strike hard and strike fast!

Combat Zone leaves the traditional rulers and tape measure behind and introduces a new “Limiter” based movement and range system, where your characters’ attacks and movement depend on the quality of their actions. Green, Yellow, and Red Actions all have different chances to succeed – so choose smartly!

Quote from the Monster Fight Club News Post from December 14, 2020.

That sounds pretty interesting. We will have to wait to see how it works on the tabletop. Regardless, it sounds promising. Plus, the game will give you another reason to buy the stunning looking Cyberpunk Red Miniatures aside from just collecting them or using them in the RPG.

I like that prospect. Now, let’s take a look at some of the sales on now regarding the Role Playing Game.

Do you want a ton of Cyberpunk RPG books for a great price? If you do, Humble Bundle has you covered this month. For $1, you can get 7 Cyberpunk e-books. For $8.25 you get 17 books including Cyberpunk 2020 (the full core rulebook of the second edition) and the Cyberpunk Red Jumpstart Kit. The Cyberpunk Red Jump Start Kit is the Introduction kit to the newest full version of the rules – Cyberpunk Red.

At $8.25 for 17 books, this is a good way to save money if you want the e-book collection. The Cyberpunk Red Jump Start Kit alone costs more than that on DriveThruRPG, and it is on sale there!

Now, I will note that you don’t get the newest core rulebook in this Bundle. The newest version of the RPG core rules is Cyberpunk Red. Right now, the full rulebook for that game is selling on DriveThruRPG at $30 for a PDF copy. Looking deeper, I notice that Cyberpunk Red is currently DriveThruRPG’s top selling product! Cool!

For R. Talsorian, that is great news!

Thank you for joining me in this post looking at Cyberpunk Red News. Specifically, we looked at the announcement of the new Cyberpunk Red: Combat Zone – which will be a miniatures skirmish game. We then looked at the miniatures for the game made by Monster Fight Club. You can buy these now and get a head start on painting them if you like them.

We wrapped up the article by looking at the Cyberpunk sale on Humble Bundle right now, and how you can pickup the newest RPG core rules to the gaming world through DriveThruRPG.

All together, this is a lot of exciting Cyberpunk Red news.