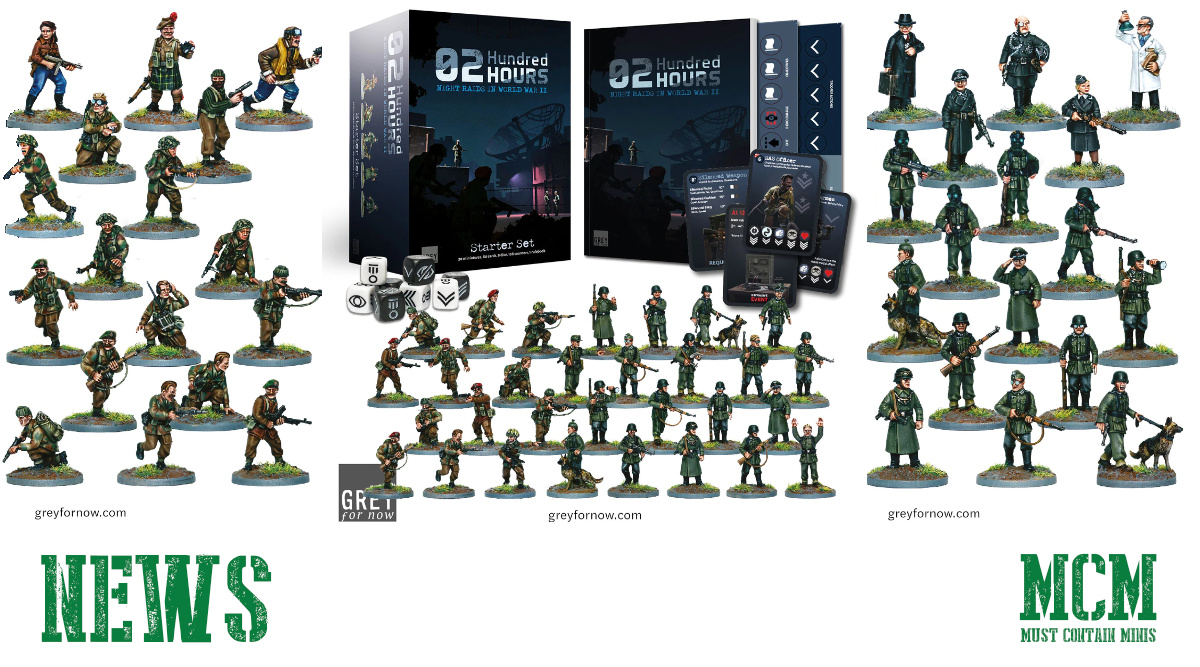 Grey for Now caught my eyes ever since they released their first previews for 02 Hundred Hours. Now, they put this game up for Pre-Order along with a number of related products (such as expansions).

For those who don’t know, 02 Hundred is a low model count 28mm WW2 miniatures game that looks extremely exciting. Stealth, patrol routes, objectives, Grey for Now packs a lot of promise into this game.

As a note, all of the images in this post are from Grey for Now but the thoughts, opinions and summaries are my own. There will be links at the end of the article.

Some Quick Information About the Game

At its core, I think Grey for Now has a winning strategy here. The game, 02 Hundred Hours, is aimed at stealth missions during WW2. The rules are flexible enough to easily allow the game to be played over many different theatres and operations with just the addition of cards and new miniatures.

I was sent an early copy of the rule book and have been flipping through it. The rules look fairly simple and straight forward.

Feel wise, it gives me an impression of Combat Patrol or Kill Team from the days of old where the defender could not take full control of their minis until an alarm is raised. Victory conditions and how the models interact can differ by mission, but let me give you some generalities.

In 02 Hundred Hours the defenders set up a Patrol Route. Their sentries will follow that route until the enemies are detected. Defenders who are not sentries follow a different way of movement. Attackers usually start off the board and come in with an objective and a secondary objective to complete.

When I read through the rules, I realized that Grey for Now set this game up for more than one theatre of war. As long as an attacker takes on a defender in a stealth type of scenario, I think these rules will work. I anticipate a number of expansions to this game. Speaking of expansions, Grey for Now announced their first two expansions alongside the new Starter Set.

Grey for Now made the first two expansions to the game available at the same time as the Starter Set. Each expansion includes extra miniatures and cards unique to the box set. These two happen to feature a handful of metal miniatures (by Grey for Now) in addition to plastic miniatures (by Wargames Atlantic).

On top of the Starter Set and two expansions, Grey for Now realizes some folks might want to get in on the game but use the miniatures that they already own. Grey for Now has those people covered too with a starter set that comes without the miniatures.

These miniatures look so cool. I want them all!

If you are interested in getting these exciting new products on pre-order, check out Grey for Now’s 02 Hundred Hours product page. Grey for Now makes any of the metal miniatures in the kits. The plastic miniatures within are made by Wargames Atlantic and are the same size as the their World Ablaze line up. I reviewed one of these miniatures sets recently. You can see that review here. I made sure to place scale comparison images in there versus Warlord Games’ Bolt Action figures.

To me, this game looks awesome and I really want to get my hands on it. Grey for Now makes some great miniatures and teamed up with Wargames Atlantic on this new gaming system. I appreciate the products of both companies, so I really look forward to what they will release together.

Are you as excited as me? Let us know in the comments below.