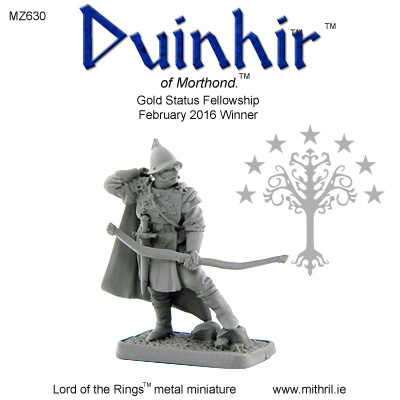 One of the many things that I love to do is to keep my eye on different companies to see their offerings. One company that I have been in communication with lately is Mithril Miniatures.

Locally, this is not a company that I see at my Friendly Local Gaming Stores, but it is a company that one can order online from. Plus, I have many readers in Europe and the UK that are closer to the company that might find their products more accessible.

For those that don’t know, Mithril Miniatures specializes in 32mm miniatures derived from The Lord of the Rings and The Hobbit Books. These miniatures do not depict the movie characters but rather the characters as described in J.R.R. Tolkien’s novels. They also have a range of 54mm miniatures.

What has me writing about Mithril Miniatures today is that they just released their first fully digitally designed Lord of the Rings figure. The casting is still done in the traditional way, but all of the design work is now done by computer. What this means for fans of the company is that Mithril should now be able to put out new miniatures faster while giving the models cleaner detail and sharper lines.

An interesting thing that my contact at Mithril told me was that the move to a fully digitally designed miniature was a two phase program. The first step in the process was to design the start of the model in the computer, but finish the model off by “printing” it and adding the details by hand. The second phase was to fully design everything inside the computer. This goal has now been achieved. Below is another picture of their first fully digitally designed miniature.

If you are interested in the new figure above, it can be found under Mithril’s Fellowship Range for 2017. Admittedly, this figure sells for more than I would generally recommend to my readers, but if one looks around the site, one can also find many miniatures more in line to the pricing that a “value gamer” can appreciate. In fact, the M-Series, Classic Series, Helms Deep and even the Limited Edition LRs ranges are all priced at decent rates. For those that like dioramas, be sure to look at the Vignettes range. There are some really nice looking models there. It should also be stated that the miniature pictured above is 50% off until January 16 (2017).
I took a look through their catalog and I personally really like the look of the M-Series MERP Middle-Earth Line, the M-Series Mordor’s Armies Line (especially the Seaman with a Grappling Hook), and the Limited Edition – The Nine Nazgul Line.
When I look at miniatures, I ask myself what I could see myself using them in. Frostgrave immediately jumps to my mind as a place to use these figures. I could also see these figures being put to good use in other miniatures games, role playing games or just used for general collecting.
One thing that I would like to mention is that Mithril plans to use their new design process to speed up the release times for both their Fellowship Range of Miniatures and their M-Series. It will be interesting to see what they come up with next.Have you bought anything from Mithril before? How did you like their products?
For those interested, Mithril is running a Contest. To enter, one needs to buy the mini above (MZ360), paint it and submit a Picture to Mithril Miniatures by the start of February 16th. As a prize, Mithril will give away the next five MZ figures to the winner. Contest Details are at…
http://princeaugust.blogspot.ca/2017/01/mithril-miniature-mz630-duinhir.html
Until next time, Happy Gaming Everyone!!!
[amazon_link asins=’B06XZB5B3Z,B01NCHZHWO,B01N48EBGK,B01G2UZJB6,B07D71DJ35,B00OQUGV4O,B00IGRFEIM,B00I7RGIZ4,B00I2OUNSU,B00HW35DN2′ template=’ProductCarousel’ store=’mustcontainmi-20′ marketplace=’US’ link_id=’70e0fdd8-8e24-11e8-82d4-fb242efe9729′]

Shout Out to RAINN Studios – Thanks for the TerraTiles!