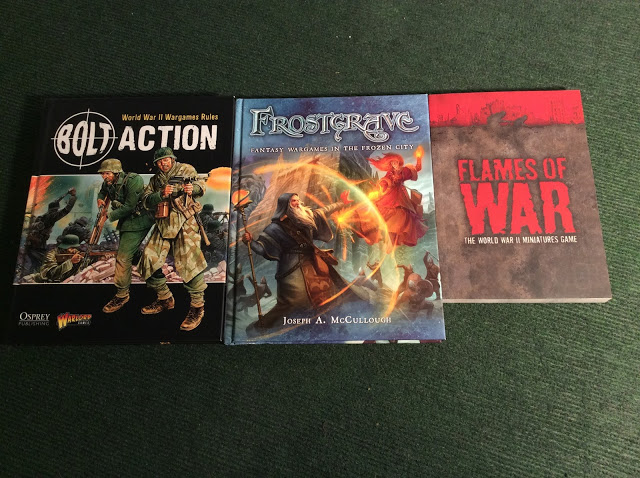 When asked what Miniatures Games I play, I immediately answer Bolt Action, Frostgrave and Flames of War. That said, these three games are only my core games. There are plenty of other rule sets that I own and play. This post will discuss the rule sets that I currently own and the new rule sets that spark my interest. If you want me to go deeper into a game and review it in a future post, please let me know.

Since December, Bolt Action has been my game of choice. It is simple, fast, and contains a luck aspect. I really enjoy the dice draw mechanic for activation. I currently play Brits, but I would like to buy into Germans as a second force.

The next rule set that I actively seek others to play is Frostgrave. This is a very enjoyable game with an RPG feel. For people who have not heard of Frostgrave, I explain it as “like Mordheim but with Wizards.” I recently played three games at a Campaign Day event and wrote both a Tournament Report and a Review of the game after the experience.

Flames of War is an old favourite and the game that I have spent the most time with over the years. I own both British and German armies and have fun each time the game hits the table. Some people ask why I own WW2 miniatures in both 15mm and 28mm. The reason is that the games have completely different scopes and feels. I find Flames a little more complex than Bolt Action and sometimes I want to play a game at a “grander scale” than 28mm.

A new and completely awesome set of books is the Osprey Wargame Series. These books are extremely affordable. Despite their price tag, they are all great reads and come with some of the highest production values that I have seen. I own two of the books, but I would love to own them all if I could – unfortunately I have to pick and choose. The two books that I own are A Fistful of Kung Fu and Black Ops. A Fistful of Kung Fu is fun and simple. It would make a fantastic convention game and someday, I would like to run it at a convention. Black Ops is a little more complex than I was expecting but it was still a good read and there is some interest in my area to give it a try.

Below is the game that drew me back into the hobby. I had such a great time with the guys from RAFM playing USX: Modern Day Heroes at my first Miniatures Convention that I bought their Starter Box for USX along with a host of their miniatures. I don’t play USX that often anymore, but still have a great time playing it when I see it at a convention. I have also fallen in love with their miniatures and continue to buy their product lines.

X-Wing, published by Fantasy Flight Games, is another game that I own. This game is extremely popular in my area and enjoys a very active tournament scene. To be honest, I find that the culture of this game is a little too competitive for my liking so I don’t play it too often. That said, this is a good game and I still get it out casually.

Like many other Wargamers that I know, I like to collect rule sets. I would like to buy everything that I am interested in, but because my gaming dollars are limited, I have to pick and choose what to purchase. Below is a list of rule sets that I am interested in acquiring. As you will be able to tell, I am a huge fan of Osprey Games. The value in production quality, content and price that Osprey brings to the table is amazing and something for which I am very grateful.

One company that I continuously watch with both caution and optimism is Games Workshop. The first time that I saw a miniatures game was actually a Games Workshop product in a Sears Catalog. I think that it is great that Games Workshop plans to return to Big Box stores with their new 40K line. The way I see it is that it gives the hobby more mainstream exposure, which is good for all of us. Their products look great, but the price point for their regular models is out of my reach.

Currently, I see their new boardgames (and starter boxes) selling for between $150 to $200 Canadian each. That is before buying more models to expand the game. For $150 to $200, I could buy…

Because my gaming dollars are limited, I find it easy to avoid GW products. In fact, trying to get a miniature fix without having to pay GW prices is what helped me discover Reaper Minis, RAFM, Warlord Games, Osprey Publishing and a whole host of other Miniature Companies. One thing that I keep hoping is for GW to re-release Mordheim or Necromunda. Necromunda is the first miniatures game that I ever played. If they re-release either of those two games, I will feel a major dilemma of where to put my gaming dollars. But… depending on the price, it might not be too much of a dilemma. Time will tell if GW prices themselves out of my range again.

I like GW because they draw people into the hobby and I have owned a few Warhammer armies of my own in the past. At the same time, I am very pleased that I went off the beaten path to discover all of these other awesome miniatures companies.I hope that you enjoyed this post and continue to come back for more. In my next two articles, I will be returning to my board gaming roots and doing a product review (and showcase) of the BattleTech Introductory Box Set and I will also be discussing Miniature Photography.
Tags: Musing