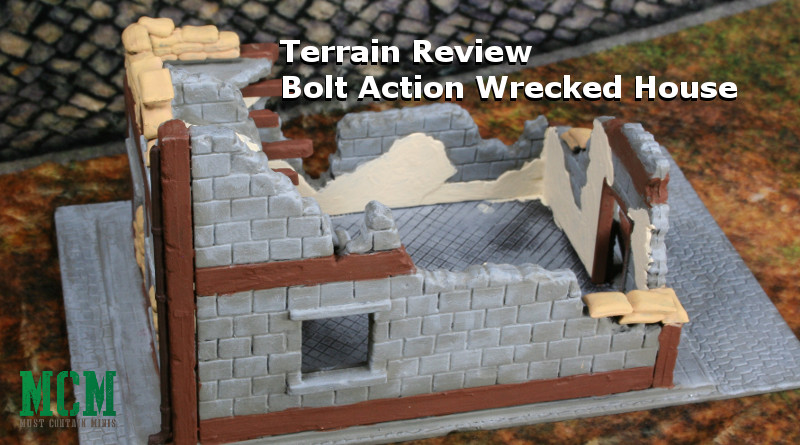 In this post, I review and showcase my 28mm Wrecked House for Bolt Action by Warlord Games. Right off the top, it is a nice model. That said, I do have a few criticisms that I will get into further into the review.

The model itself took paint well and I painted it with my standard craft paints that I like to use for terrain. Like the other pieces, I gave it a black undercoat, two colours of grey and some brown. This model also features some off-white on the walls, latte colour for the sandbags and rust for the metal pieces. Of course, I primed it with Gesso first.

Below are a series of pictures that I took of the wrecked house.

Overall, the piece looks pretty good – even with just a quick paint job.

As stated above, this model looks good. That said, it is not without its faults. In my mind, the biggest fault is its scale. This piece is smaller than the Bolt Action Miniatures. Check out those poor Bolt Action figures in the house. They don’t even fit through the doors without bending as they enter. To me, the building looks to be 1/72 in scale rather than 1/56 when compared to the figures.

My other criticism of this terrain model is its size. Personally, I like larger terrain that fit 10 man squads. This building holds 8 models on the bottom floor and two on the top.

On the plus side, this model is easy to build, quick to paint and feels sturdy. It also looks good.

To reiterate from previous posts, I do not assign scores to my reviews. The reason for this is because what I like, others do not and vice-versa. The important thing to me is that you walk away knowing more about the product so you can make an informed decision. For example, while I complain about the size of the building, I know a number of people prefer 1/72 over 1/56 terrain for 28mm gaming simply because they prefer the size. They like that the buildings occupy less of the table. It all comes down to personal preference rather than absolutes.

For me, the model is nice enough, but I wish it was of a bigger scale and size. The terrain piece actually came to me as part of the Bolt Action starter set that I bought some time ago.

Hopefully you enjoyed this quick review and showcase of Warlord Games‘ Wrecked House.