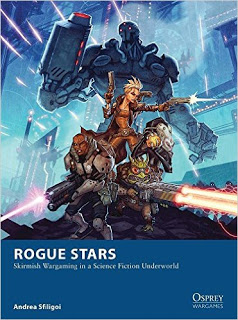 A new and exciting product coming out from Osprey Games is Rogue Stars. This is a game that I have been really looking forward to for a very long time. The first time that I wrote about it was back in June. Osprey Publishing has been very kind to me and sent me an advance copy of the rules. Right now, I am slowly reading through the rules and will post a review when I am finished.

For those that have not heard of Rogue Stars, the back of the book describes the game as follows…

Rogue Stars is a character-based science fiction skirmish wargame, where players command crews of bounty hunters, space pirates, merchants, prospectors, smugglers, mercenary outfits, planetary police and other such shady factions from the fringes of galactic civilisation. Crews can vary in size, typically from four to six, and the character and crew creation systems allow for practically any concept to be built. Detailed environmental rules that include options for flora, fauna, gravity, dangerous terrain and atmosphere, and scenario design rules that ensure that missions are varied and demand adaptation and cunning on the parts of the combatants, make practically any encounter possible. Run contraband tech to rebel fighters on an ocean world while hunted by an alien kill-team or hunt down a research vessel and fight zero-gravity boarding actions in the cold depths of space – whatever you can imagine, you can do.

The game itself is played on a 3′ by 3′ table. The rules are fresh and new and while there are some similarities to A Fistful of Kung Fu and other games by Andrea Sfiligoi, these rules are heavily modified. These modifications make this a much different gaming system than Andrea’s previous works. The most obvious difference is that the game runs off of d20s. There are plenty of other differences too, but I will get into those once I actually review the book.

Just flipping through the book, I get really excited about all the possibilities. The rules are somewhat generic in that a player could build his squad to basically represent any crew theme that they want. Want to use figures from a certain popular movie? Go ahead! There are rules for “Force Swords” and Psionics. Want to use models from the Biggest Miniatures Company out there? Go ahead! There are rules for Power Armour, “Powered Gauntlets,” and “Molecular Slugthrowers.” The character and squad creation rules are so flexible that players can really fit the game to whatever sci-fi models they already own.

That said, North Star Military Figures has developed an official line of figures for this game. Similar to what was done for Frostgrave: Forgotten Pacts, North Star is running a “Nickstarter” pre-sales program for these products. There are two levels to this campaign. One gets the purchaser the rule book along with a “free” miniature and the other level gets 17 metal miniatures and the book. For those that buy the complete deal with 17 figures, they will also be able to add on extra metal miniatures if they wish.

I am sure that other fine stores will also carry the product, but for now, these are all the places that I know of running pre-sales for the book.