Today, we are looking at Highland Infantry Rifles by Pulp Figures. I bought these guys at a gaming convention in Hamilton through RAFM Miniatures. I have been looking at Pulp Figures for a while because they have some really great looking miniatures in their Weird Menace line that I want to use for my German Army in Bolt Action and Konflikt ’47. When I saw RAFM at Broadsword 2, I asked to get a pack of Arresting Gestapo Troopers, but they were out. Instead, I bought Pulp Figures’ Highland Infantry Rifles from their British Empire Line.

These guys are really cool and I like them a lot. The details on them are fairly “chunky” in that the details are raised. Because the details are raised, painting them was a breeze. If you paint from the bottom layer up, you don’t have to worry much about getting the colours on the layer below as there is a good amount of separation between the parts of the model. I for one can really appreciate that.

This is the group of five British Highland Infantry Rifles by Pulp Figures that I bought and painted. On Pulp Figures’ Product Page, a statement is made that the last time that the Kilt was worn in battle was “during the Fall of France in early WW2.” Despite this fact, I plan to use these figures to represent British Commandos throughout the war. Generally, I play Late War and I figure that the Kilts would make an easy way to distinguish between my regular Veteran Infantry and Commandos on the tabletop.

These models are very solid and cast in one piece. Because of this, I am not worried about the rifles and bayonets breaking off as what sometimes happens with my Warlord Plastic models.

These firing soldiers look fantastic. I really like the details in the model and how easy they were to paint. The pleats on the kilt look great.

There was minimal flash to clean off of the figures and no re-bending of rifles required in the pack that I received. 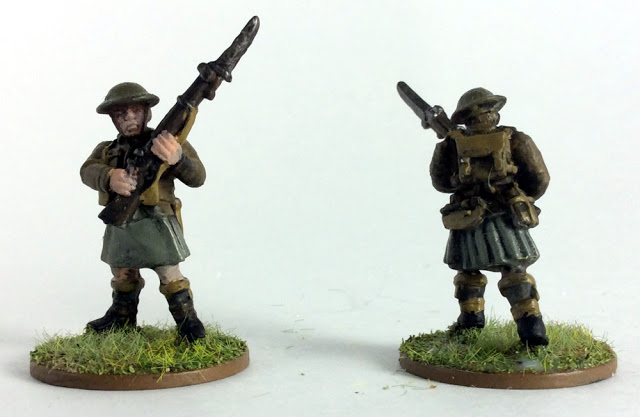 Two soldiers ready to move into battle. The details turned out so great on these figures. 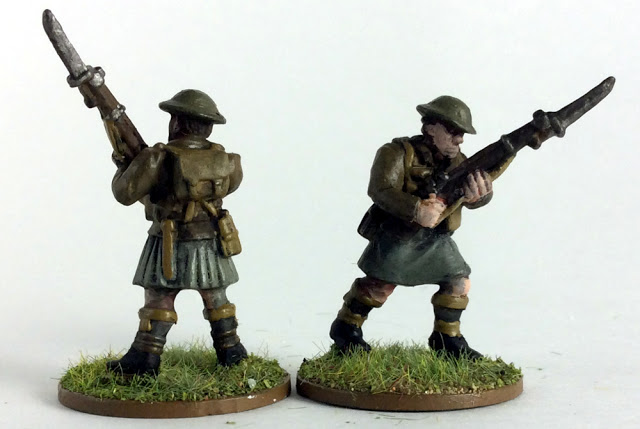 A reverse shot of the same two figures above. 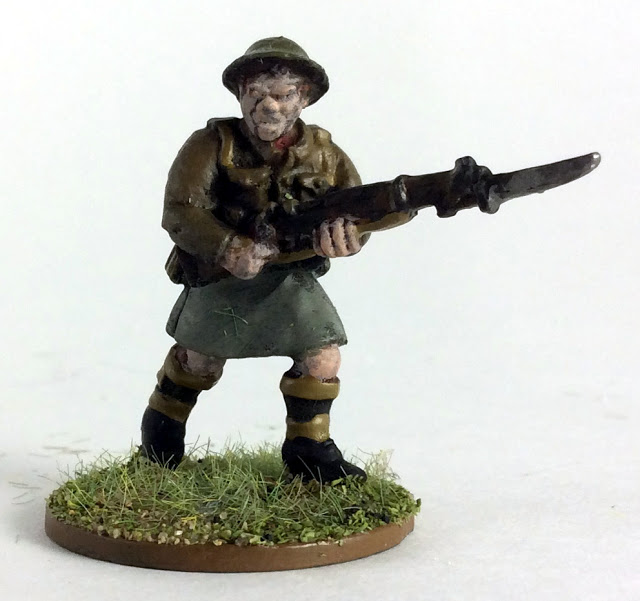 This is the final figure in the pack of 5 that I bought. Because his pose is somewhat unique compared to the others, he will be my group’s officer until I paint up a model with an SMG or someone pointing. I admit, I am not good at painting faces, but from a tables length away, these guys look fantastic despite my painting skills not being top notch. 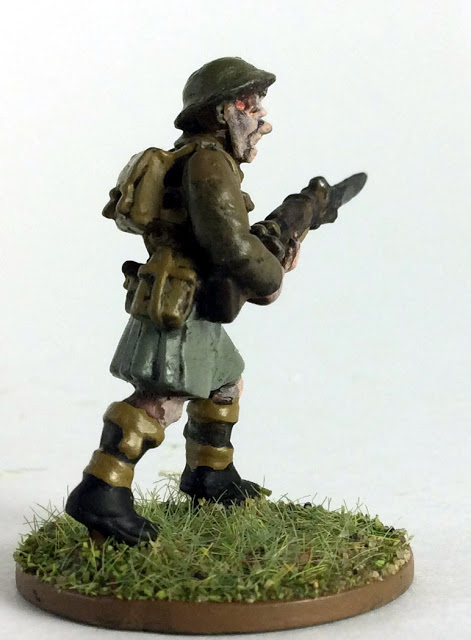 Side shot of the same model. 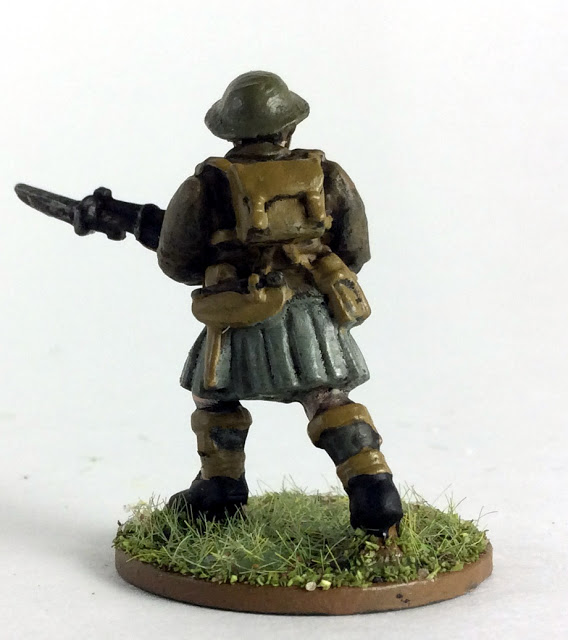 Same model from behind. Again, the details on this model just jump out. This model should be easy for any painter to paint no matter their skill level.

The figures above all came with integrated bases. I cut those bases off of the figures and mounted them onto round bases to make them fit in better with my Bolt Action Miniatures. Below are pictures for scale and comparison purposes between Pulp Figures and Warlord Games. 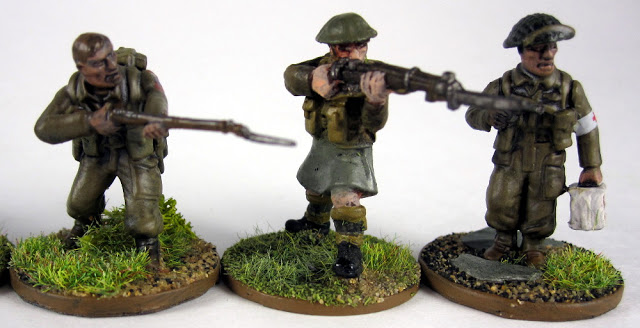 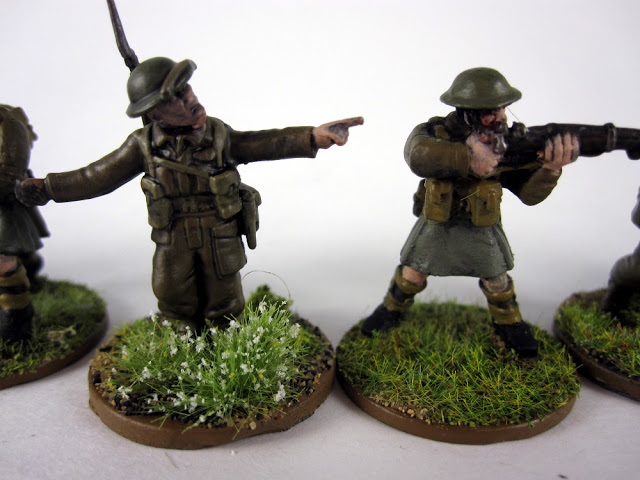 The Warlord Plastics have more details molded into them, but the Pulp Figures models painted up quickly and have some nice character to them.
I was so happy with these miniatures, that I bought myself a pack of Highland Special Weapons at another gaming convention. This time, the Models were sold by Crucible Crush rather than RAFM. The Special Weapons Pack comes with 1 Anti-Tank Rifle, 1 Bren Gun, 1 Lewis Gun and 2 Tommy Guns. I am looking forward to painting these guys up and getting them to the table with the 5 Rifles that I already painted. Together, they will make a competitive 8 man team of Commandos with a Boys Anti-Tank Rifle Team for support.

My new Highland Special Weapons Pack by Pulp Figures ready to be painted up for Bolt Action. 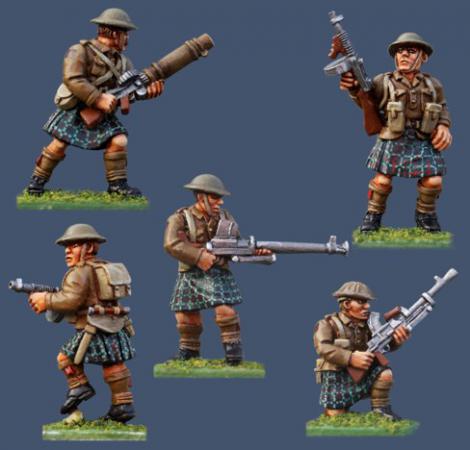 Above is a picture of the Highland Special Weapons Pack by someone that paints much better than me. This picture is from Pulp Figures Webstore.
For those interested in getting these models for themselves, they can be purchased on the Web through Pulp Figures web-store for $16 a pack. That isn’t too bad for 5 well sculpted metal figures. They do offer discounts for people that buy multiple packs. I personally buy these figures at gaming conventions to avoid shipping fees. If you are at a convention and can’t find Pulp Figures on their own, they seem to have working relationships with RAFM, Crucible Crush and Crocodile Games, so try them. Both times that I bought Pulp Figures it was through one of those above mentioned companies. For my friends in the UK, North Star Military Figures now carries Pulp Figures for 10 British Pounds for a 5 pack. Be sure to check them out.

Thank you for taking the time to read this review and I hope that you enjoyed what you see here.

How to Prep Plastic Miniatures for Painting

How to Paint 28mm Skeletons