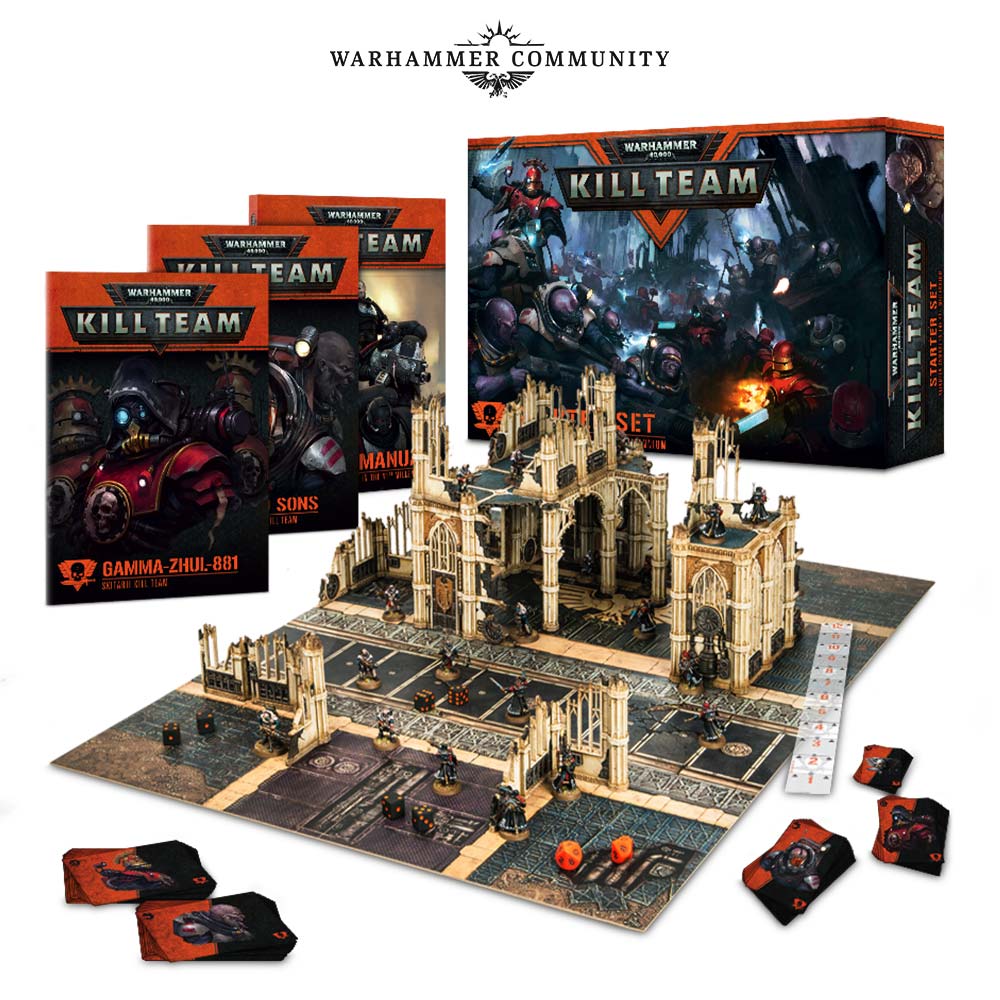 The Kill Team Starter Set comes with two forces, a ton of terrain and rules for the game.

Games Workshop is typically a company I don’t write too much about. The reason for this is because of their prices and the fact that there are so many alternatives out there. That said, I constantly keep my eye on them and what they are doing. This weekend I saw a flurry of really interesting news with information about the upcoming Kill Team game, new starter sets for Age of Sigmar, the new Giant Robot game Titanicus, and a new starter for Lord of the Rings.

All of this news I find extremely exciting, and I can’t wait to learn more about their upcoming releases. For now though, below is what I know of each game so far. All of the images in this article are from either Games Workshop’s website or the Warhammer Community Page.

For a company that had been losing market share, they have really figured things out over the past few years and are turning things around. That is a large part of why my eyes still watch them.

Now this is a game that checks a lot of boxes for me. Low model count, skirmish based, and set in the Warhammer 40,000 universe. Can’t say that I am a fan of the Skitarii, but I love the Genestealer Cult models. The starter box comes with an absolute ton of terrain and each warband expansion box comes with a piece of terrain too.

Of course, GW has previewed a larger number of their factions, but you will have to go to their community page to learn more. I aim to give a taste of what is coming and my opinions on those items. If you are wondering about their prices, the starter should run about $130 (US) and each Team box should go for $60 (US). This information is from Bell of Lost Souls.

Soul Wars looks pretty cool, but for those that want something even more affordable, a smaller starter set will also become available.

If two starter sets wasn’t enough, it looks like there is even another starter set on the horizon. This gives people three different options on how to get in and try out Age of Sigmar. This move by Games Workshop is one that I really appreciate.

Will I get into Age of Sigmar? Not yet. I tried Shadespire and liked it (Battle Report to come), and I would be open to trying Age of Sigmar, but I don’t think I will personally buy the game. The reason, simply because I prefer the older aesthetics of Warhammer 8th Edition. If Games Workshop ever brings back some of the more “realistic” looking miniatures from the past (like the Empire), then maybe.

Regardless, these starter sets look cool!

A year or two ago, I read through the book Titanicus. It was interesting, and years ago I wanted to get in on Warhammer 40,000: Epic. I am wondering if this game would scratch that itch.

This one has Giant Stompy Robots, destroyed buildings and runs on a smaller scale. I am really interested in seeing what comes of this game!

Lord of the Rings

I will not lie, I thought GW was withdrawing support for this game. I haven’t seen many releases for it lately and I was never a fan of The Hobbit: Escape from Goblin Town starter set. That said, I wished I had bought the Mines of Moria starter and I like the models of the game.

When I saw The Lord of the Rings: Battle of Pelennor Fields Starter Set, I was shocked. I hope this one does well and I might get it myself.

As you may know from my previous posts, Lord of the Rings is a game that keeps capturing my eye due to the beautiful miniatures and awesome gaming tables that I see at my local conventions.

I am not entirely sure of what is in this new starter set, but the image below was shown on the Warhammer Community Page. It isn’t crisp, but it is exciting.

So far, this box looks promising and it certainly is tempting. Time will tell if it is enough to draw me back to GW. I know a number of local players have also been trying to move me over The Hobbit.  🙂

Games Workshop certainly has been doing things right lately. Last year I was excited about Shadow War Armageddon and Necromunda. This year, it is The Lord of the Rings: Battle of Pelennor Fields, Titanicus, and Kill Team that have captured my eyes. Will it be enough to bring me over? Time will tell.