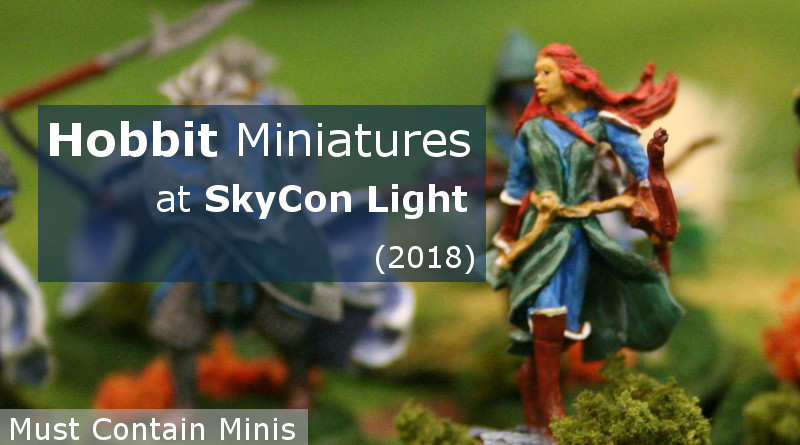 One of the things that I love to do is attend gaming conventions and check out the local scenes. On April 28, I went to SkyCon Light in Kitchener, Ontario, Canada. The guys running this convention held a Hobbit Tournament with 24 participants.

During their lunch break, I went around and took pictures of their armies on display. This post is a Showcase of their painted Hobbit Miniatures. Unfortunately, I don’t know who painted the models, so I can’t give credit where it is due, but there were plenty of great models on display.

Oddly enough, even thought the game is called The Hobbit: Strategy Battle Game, I did not see a single hobbit miniature on the tables anywhere. Perhaps I missed one and someone brought one along, but, to me, it looked more like battles in the Hobbit World.  🙂

All kidding aside, there were some fantastically painted miniatures here. My favourite force would be this dark army below.

All the armies at this event were painted. While the army above was my favourite, everyone did a great job at painting their armies and I am sure others reading this post will disagree and find some of the other armies more to their liking. Judging the looks of an army can be a fairly subjective task when every one did such a great job!

Below are the pictures of the figures I thought were especially good or significant for one reason or another.

The Forces of Evil

The Forces of Good

Of all the Hobbit / Lord of the Ring miniatures at SkyCon Light, my favourite was Radagast the Brown™. I had never seen this model before so it was pretty neat to see one on the tabletop.

Sampling of the Gaming Tables

The Hobbit Tournament set up an impressive number of tables for this event. Below are a few pictures of some of the gaming tables.

This tournament was put on by a different group than the tournament ran at Hotlead. The tables at Hotlead were amazing, but these ones are pretty good too. Amassing enough terrain for 12 to 15 gaming tables is no easy feat and I would have been happy playing on any of their tables.

It really surprises me how much interest there is in the Hobbit as I don’t see it being played much at any of the FLGS. That said, it certainly had a big draw at SkyCon.

Special thanks goes out to the SkyCon Crew for providing Must Contain Minis with Media Access to their event. I appreciated the pass very much as my goal was to talk to vendors, check out gaming tables, and take photographs. Hopefully everyone enjoyed this quick showcase of the painted Hobbit Miniatures at SkyCon Light 2018.