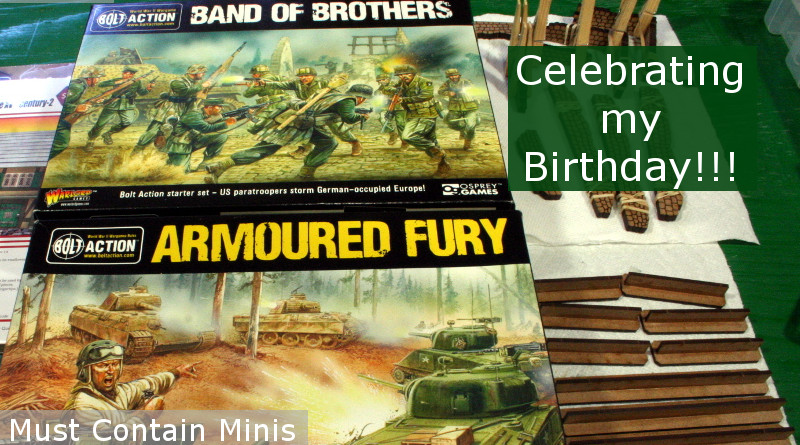 This week I spent some time celebrating my Birthday.

Normally, I like to go Broadsword in Hamilton to celebrate my Birthday in style by playing several participation games. This year, I attended Broadsword yet again and had a fantastic time!!! I even ran a game of Frostgrave: Ghost Archipelago (Report still to come). While I often consider attending the May Broadsword Convention as my gift to myself, this year, I decided to do more.

This year, I also took a day off of work as a “me day” to work on projects that make me happy. My ambitions for this “me day” were high. I intended to write six blog posts, build three sets of terrain, assemble a Bolt Action army, and get some painting done.

At the end of the day, I completed two sets of terrain, assembled a German Bolt Action Army and wrote one Blog post. I also watched a terrible movie on Netflix.

One of the things that I love most about our hobby is assembling models and miniatures. I actually much prefer building kits over painting. My favourite kits to work with include plastic figures and MDF terrain. Because I like building plastic kits and MDF terrain, that was exactly what I treated myself to for my Birthday. In my “to build” pile, sat both Amroured Fury and Band of Brothers by Warlord Games. After doing some homework, I realized that I could make a 1000 point German army with what is in these two boxes. I also happened to have a number of XOLK kits that I have been meaning to get to for sometime.

For those that haven’t tried XOLK, they make some excellent terrain kits.

In my to build pile sat three MDF Terrain Kits.

I completed two of the three projects above to the point that they are built and sprayed with Shellac. The 15th Century House and the Painting of the Hedgerows and Walls will have to wait for another day.

I am looking forward to getting these XOLK models completed and posting more MDF Terrain reviews onto Must Contain Minis. Since the weather was nice, I also coated my City Walls with Shellac along with the other kits that I coated today.

Using the contents of the Band of Brothers and Armoured Fury, I pieced together a 1000 point army. I have a few other pieces in there that I bought in Blisters, but they add options to what I can field. Below is a picture of the completed army. Better pictures will come whenever these guys get painted.

I made two of the figures in the squads above unique so they could double as a First Lieutenant and a Forward Observer / Air Observer. Using just the two boxes you can build a 1000 point army. So cool!!!

I also augmented the army above with a few blister packs of soldiers. We have a selection of Forward Observers (one will be used as the army Commander), a Panzershreck Team and a Flame Thrower Team.

Overall, I am fairly happy with the collection so far. Items that I would still like to get for this army include a blister of German Commanders and a 75mm LeIG18 light howitzer Gun. I would also love to take this force into Konflikt ’47 with a box of German Heavy Infantry and the blister packs that match. TotenKorps would also be cool.

I had a very enjoyable Birthday this year. I went to a local gaming convention, took a day off work to spend some time building up miniatures, and I spent time with people that I care about.

On The Paint Table – Rogue Stars