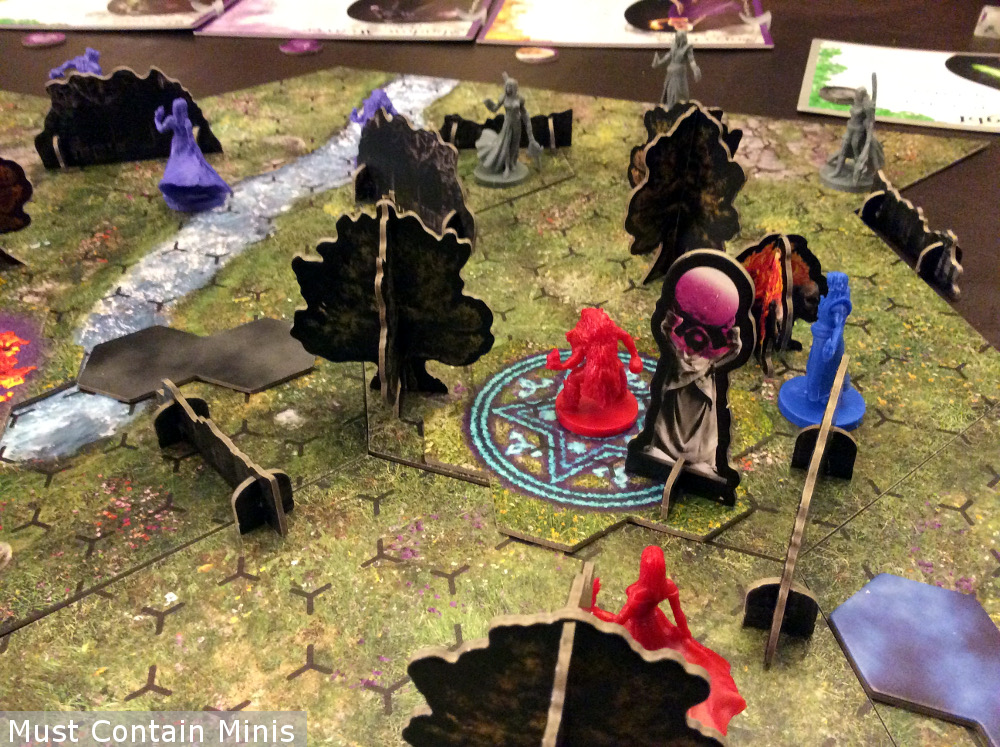 Both the Red Player and Purple Player lay claim to the Power Circle.

Quiet a while ago, we got another game of Incantris. In this post, we outline that game and discuss how we came to a three player stalemate.

Overall, Incantris is a great game and we have a few posts about the game already on this site. If you are interested, you can take a closer look at the Miniatures of Incantris or read through my First Battle Report and Review of the game. While it is a fantastic game, we did come across a short coming in this round of Incantris that lead to a stalemate.

Right off the top of the game, the Blue Player rushed an Arcane Knight in on the Grey Player. The Grey player made quick work of the Arcane Knight and slaughtered the Wizard before help could arrive. Sometimes it just isn’t a good idea to rush a single combatant up against three.  🙂

While Blue engaged the Grey Player immediately, the Purple and Red players hung back and waited to make their moves. The Red Team separated their team while the Purple Team stayed closer together.

The Grey Team intensifies the fight and takes out yet another Blue Wizard. This is not a good day for the Blue Player. Two casualties so far and both belong to him.

Just One Wizard Left on the Blue Team

To try to cut their loses and to have a lasting effect on the game, the Blue Sorcerer calls in a Power Circle in front of him on the map. The Power Circle adds one die to the power of any spell cast from within.

The Red Player sees an opportunity and moves his Shaman onto the Power Circle. So too does the Purple Player who casts a Wizard’s Eye type of spell that allows her Sorceress to cast spells from a stone statue as though she was there.

Just One Wizard Left on the Red Team

The Grey Team is Eliminated

The Battle rages on and the Grey Team starts to pay the price for all of their victories. They would be the first to be eliminated from the game.

Just One Wizard Left on the Purple Team

With the Grey Player Gone, the only teams left are Purple, Blue and Red. The Blue Sorcerer takes out the Purple Shadow Weaver and all three teams are now even with just one Wizard apiece.

It is at this point that we came across an interesting stalemate to the game. Each of the three remaining Wizards have a healing spell, and with the Circle of Power nearby, they can all boost the power of their spells. That said, all three players realized that if they concentrate their attacks on just one Wizard, the other would kill them once the other Wizard was killed. As a result, each Wizard would perform an attack spell followed by a healing spell the next round. With the way we were going, it seemed like three to four hits would need to be scored to kill a Wizard. No Wizard was willing to lay that third hit because it would mean missing a chance to heal themselves, thus making themselves vulnerable to the other Wizard.

After an inordinate amount of time trying to play out this three-player stand off, we decided to call the game as a draw.

Incantris is a great game, but we happened to find a case where a stalemate will prevent the game from coming to completion. As I stated in my earlier review of the game, I highly recommend it and think that the game makes a great gateway game between Board Games and Miniatures Games.

Special thanks goes out to Heath from RAINN Studios for providing Must Contain Minis with a copy of Incantris for Review purposes.