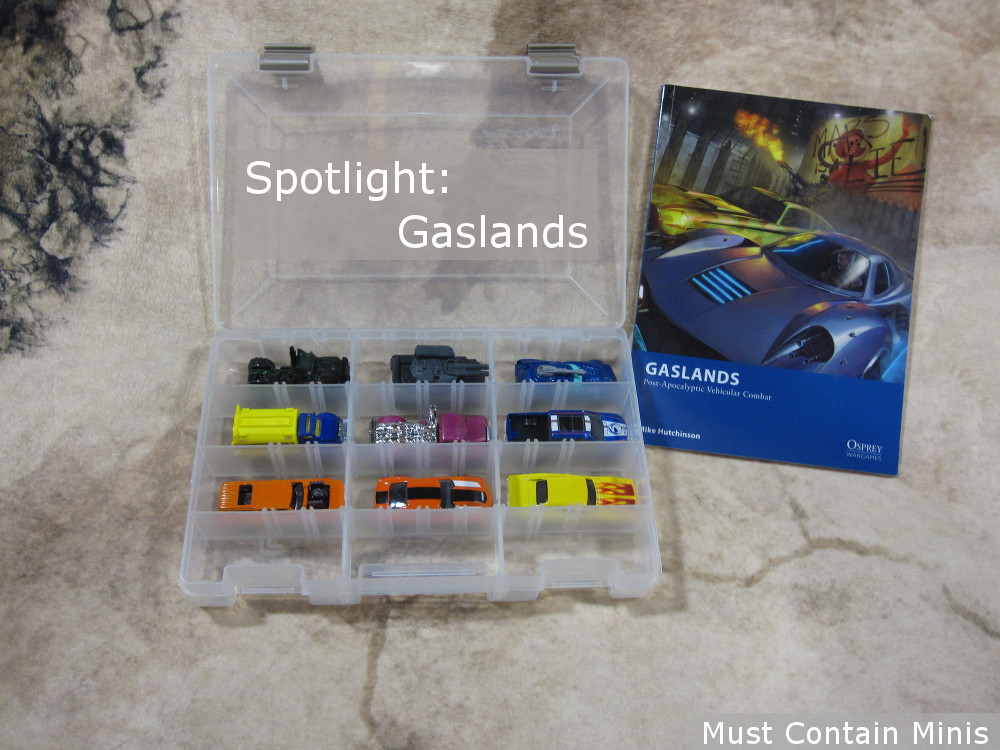 Have you heard of the Gaslands game by Osprey Games yet?

This article is a quick spotlight on that game. It is not a Review (as I have not yet played the game or given it a deep enough read to form a full opinion). Instead, this is a short post to let my readers know about a game that looks to be both very interesting and a good value.

Personally, I would describe this game as a miniatures game that combines elements from X-Wing, Car Wars and other games into a Post-Apocalyptic Vehicular Arena / Death Race type of game. In it, you can purchase vehicles, weapons, and extra crew members to help you win in the arena games and further their careers.

On their website, Osprey Games describes Gaslands as follows…

Shoot, ram, skid and loot your way through the ruins of civilisation with Gaslands, a tabletop wargame of car-on-car destruction in a post-apocalyptic wasteland. Players control small fleets of armed vehicles in battles for resources, dominance and survival. With rules for multiple vehicle types (from motorbikes to big rigs), varied special weapons and accessories (including oil slicks, caltrops and nitro boosters), and a host of options for scenarios, environmental conditions, crew and campaigns, players can tailor games to match their own visions for an anarchic future.

I would describe Gaslands as a value based game. The rules are extremely affordable and all you need to get into the game is some 6-sided dice, the rulebook and some dinky cars. In terms of final costs, you can easily be “all-in” for $20 to $40 (perhaps for even less if you have kids and invade their toy chest). Ideally, you would also have some weapons in your ‘bits box’ to customize your new toy cars.

In the unlikely event that you don’t have any suitable weapons in your ‘bits box,’ don’t worry. There are toy cars that are already armed. Below are a few of the cars that I picked up from the Dollar Store. They are already armed and look pretty much “good to go” right out of the pack.

The book itself is 64 pages long and contains roughly…

In a standard game, players start by choosing a sponsor for their team. The sponsors give each team specific bonuses and vehicle restrictions. The sponsors also open up various talent trees for the drivers.

Players then choose to buy vehicles and create their teams. You can buy a bunch of cheap Motorcycles and Buggies or you can buy a smaller number of cars and trucks instead. Some players might even choose to go all out and buy a bus, helicopter or tank for their team. There are a lot of options in this game for different vehicles, weapons, and skills. This means that you should be able to customize your team and keep your models as “what you see is what you get.”

If you want to play a string of games, there are some light campaign rules where players get to spend an agreed upon number of “cans” (game currency is gas cans like Mad Max) between each game to upgrade their vehicles and buy new ones. In so doing, all of the teams stay relatively similar in their strength throughout all of the games.

For movement, the game uses templates (which I am of a mixed mind about).

Overall, the game looks to be a very interesting game at an extremely affordable price.

Below are a few more pictures of the cars I bought for Gaslands. These ones can certainly use some weapons and new paint jobs.

Below is a staged photo of a race in action. For those wondering, all of the pictures in this post have been taken on a Cigar Box Battle Beachhead Mat.

If you see Gaslands in the stores or online, it is well worth a look. The game uses templates (like X-Wing) and looks to be simple and fun. It is also super affordable. All it takes to get going is the book, some toy cars, a few 6 sided dice and some printed templates. The templates can be photocopied out of the book, purchased or downloaded.

I am looking forward to trying this game out.

Disclosure: Osprey Games sent Must Contain Minis a copy of Gaslands for Review.

Review: Frostgrave: Into the Breeding Pits