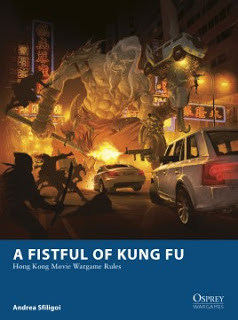 Now to start, I want to disclose that I am a huge fan of Osprey Publishing. I love how they publish rule books with extremely high production values at an extremely affordable price. I don’t remember if I bought the game from Amazon or J&M Miniatures, but both companies and Osprey itself sell this book at an amazing price. This book clocks in at 64 pages and is a fantastic value at around $20 Canadian. It is even less if you buy a pdf copy from DriveThruRPG.

A Fistful of Kung Fu is a great miniatures game written by Andrea Sfiligoi and published by Osprey Wargames. To my understanding, it uses the same engine as what is in the “A Song of Blades and Heroes” series of games, but with some tweaks to make it fit the Cinematic Martial Arts theme. Osprey Publishing describes the game as follows…

A Fistful of Kung Fu brings the hyper-kinetic, bullet-spraying, demon-slaying, kung-fu-fighting action of Hong Kong movies and Asian cinema to the wargames tabletop. In a modern world walking a precarious line between the advances of next-generation technology and the tradition and mysticism of ancient cultures, Kung Fu schools face off in no-holds-barred tournaments, corporations hire agents and spies to steal each other’s secrets, overworked SWAT teams respond to gunfights between feuding Triad and Yakuza clans, and ancient artefacts are sought by hopping vampires, demon sorcerers and cyborgs alike. Combining the gunfights of John Woo’s Hard Boiled, the hand-to-hand combat of Enter the Dragon, the sheer mystical weirdness of Big Trouble in Little China, the wuxia action of Crouching Tiger Hidden Dragon, and everything in-between, A Fistful of Kung Fu is a skirmish wargame unlike any other (back of the book and Osprey’s Website).

Does the game hit the mark? Absolutely. This is a low model count game and each side will generally field 6 to 16 figures. There are three different sorts of characters. Each player will have a Protagonist. The Protagonist is the main character on a force. He or she is the star. This game is extremely cinematic so think of this person like your Jackie Chan or Bruce Lee. They can take a lot of damage and dish it out. They also move and attack with more speed and ferocity than any of the other characters. After the protagonist, each side will field a number of extras. These extras are not nearly as good as the protagonist and go down easily. Finally, each side may field one bruiser. The bruiser has a better combat value than an extra and can take some skills otherwise reserved for protagonists. They are still squishy targets compared to the protagonists. The game is recommended to be played out on a 3′ by 3′ table with two players over the course of an hour, but can be scaled up for larger games.

The rules themselves are quite good. The system is simple and enjoyable. There are two major stats to keep track of for each character. Quality and Combat. The lower the Quality, the better the character is at activating and taking tests. The higher the Combat value, the better the character is in a fight. The same stat is used in ranged attacks as melee attacks with different modifiers. The most complicated part for most players (in my experience) is learning the activation and reaction system. Players that have played the Song of Blades and Heroes games get the concept quickly, but for others it usually takes a little bit of time to wrap their heads around and figure out the best activation strategies surrounding the system.

At its core, players roll up to three dice against their Quality Stat. The number of successes determines how many actions the character receives. If they roll two or more fails, the turn flips to their opponent. For each failure, the enemy’s protagonist may take an extra action by doing a “reactions” test. This reaction allows the protagonist to make extra attacks and movements. Depending how unlucky a player is, it could mean that the enemy’s protagonist gets several actions in their turn. This makes the protagonists larger than life in a way other than through their stats and abilities. Once the protagonist fails one reaction roll they may not take any more reactions until the next turn.

There is another element in this game that I don’t think is in the other Song of Blades and Heroes games and that is the concept of Chi. Chi maybe used for better movement and attacks, to prevent a turn-turnover and for fueling abilities. This Chi maybe regained by focusing your protagonist for a round or by fulfilling a game condition. Chi is also gained to a victor of a Campaign mission. Yes, this game can be played as a campaign over the course of a day or afternoon; however, the campaign rules are not the focus of this game and extremely short. Personally, I have not used them and instead use the rule set for one-off games.

Combat is quick and simple. It consists of a dice off where each side rolls one six-sided die and adds their combat value and various bonuses. The player with the highest total wins and may consult a chart to choose the game effects for the combat. Extras tend to get knocked out if beaten by one or killed if beaten by two or more. Protagonist can lose a value of C if they lose by 3 or more. They need to have their C reduced to -1 to be knocked out or -2 to be killed. Their C usually starts at 4. This is another differentiator that makes the protagonists larger than life versus the extras and bruisers.

For character creation, there are plenty of options. The book comes with three levels of characters (Protagonist, Bruiser and Extra) and there are 81 different traits that can be assigned to them. I find it easier if the extras are all assigned the same traits as it can become some work figuring out what each extra has if they are not all the same. There is also plenty of variety in missions and suggested complications. One cool thing is that the game should be played on tables with plenty of terrain. This terrain can be used in many ways including as improvised weapons, or activated props that cause secondary attacks.

There is an official line of miniatures for the game by North Star Military Figures but I use just what I have available in my own collection. I have written a couple of articles about this game in the past including a Six-Player Battle Report from a Convention Game that I ran and a 12-Article Series that I ran before the event.

Overall, I find this book a lot of fun and an absolute steal at its price. My verdict is that A Fistful of Kung Fu is perfect for anyone that wants to recreate scenes from Martial Arts movies or have a game where the main characters are larger than life compared to everyone else. I highly Recommend this game.

For those interested, A Fistful of Kung Fu is available through DriveThruRPG as a digital download. It is also available from Amazon.