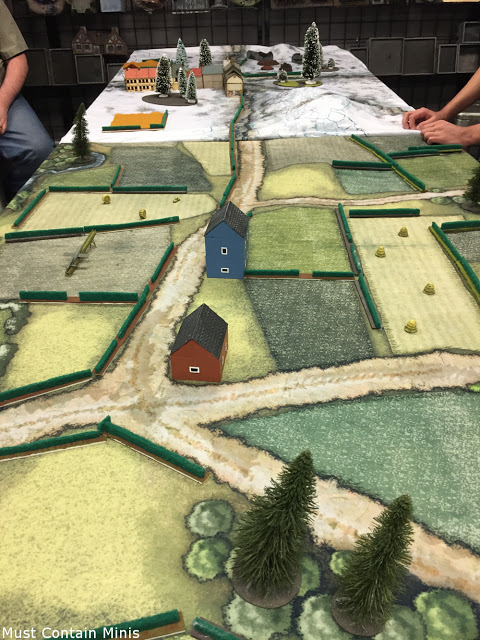 This time around, I am going to do the Tournament Report a little differently. This post will be a general post showing off some of the tables that we played on and showcasing my army for this event. Later, I will post a series of three battle reports stemming from this event.

For this tournament, Must Contain Minis sponsored two tables with a couple of Battle Mats and some Terrain. Special thanks goes out to Cigar Box Battle for sending me these mats. They are awesome! Aside from the mats, I also provided some small Bales of Hay, a V1 Rocket and some Craters.

Putting these items together with other people’s terrain really made some great looking tournament tables. Below are two quick pictures of the tables sponsored by Must Contain Minis. Thanks also goes out to the others that provided terrain for the tournament. These were truly great tables.

Others in the group also provided terrain for some excellent looking Tournament Tables. Below are pictures of two other tables sponsored by other people.

At my last Flames of war tournament, I brought an all Infantry army. This time, I brought a Panzer Kampfgruppe from Desperate Measures. It is similar to the list that I won first place over-all with at a tournament in London (Ontario) a year or two back. Below is a picture of my forces.

The above army will be featured in all three of my upcoming Battle Reports from this tournament. For now, I will share a few action pictures from some of the games I did not play.

This next image is actually one of my army trying to hold onto an objective versus an onslaught of American Tanks. For those wondering, my objective is in fact a German Officer summoning a Demon. At this point in the war – things are so bad that this officer is not against selling his soul to get out alive!

Brenden and Phoenix Games (in Kitchener) threw an excellent Flames of War event. I was very happy to be a part of the event by providing terrain and participating in the tournament. Special thanks goes out again to Cigar Box Battle for sending Must Contain Minis the battle mats. Right now, I am getting some fantastic shots of the mats in use and the reviews are still coming. I can give my readers a bit of a spoiler about the upcoming reviews. I LOVE these mats!

To end, here is another photo of the Frozen Ruins Mat. It shows off two things that I want to point out to my readers. One, the height of the mountain under the mat. It’s almost as big as the houses across the way. Two, the slightly out of focus man in the red shirt. That is Kevin Wardrop. He was the overall Champion at this Flames of War Tournament. Congratulations Kevin!