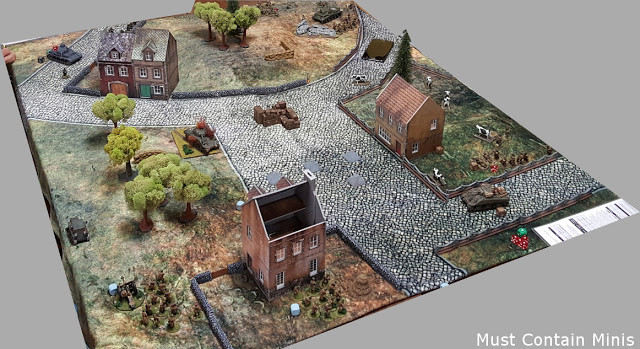 A short while ago, at Broadsword 4, Dave Lamers and Randall Carder ran a demo game of Bolt Action. In this game, players assumed one of the nations (French, American, British or German) in a non-historical four-way free-for-all. This Battle Report focuses on the highlights of the game. Below is a picture of the board in action.

All of the images in this Battle Report are from Randall Carder and edited by Jacob Stauttener. One of the participants asked that his name not be released, so I went a little wild and greyed out identifying features of the players in all the photographs to respect their wishes.

Below are the forces they could choose. How cool is it to see Early French on the table? This is the first time that I ever saw these miniatures in my local area.

The French brought two 10 man squads, a light howitzer, an armoured car, a light tank and a lieutenant. All of their figures are rated as Regulars.

The Americans brought 2 eight man squads, a lieutenant and a Sherman tank. Their entire force is rated as Veteran.

The British brought 2 ten man squads, a PIAT team, a Forward Observer, a Cromwell and a lieutenant. All of the figures are rated Regular except the lieutenant. He is a Veteran.

The Germans brought a highly elite force with 2 seven man squads, a Panzer IV and a lieutenant.

All of these forces came out to be about 550 points each.

If I were the German player, I would have been pretty nervous about having three Allied armies on the table. Fortunately for that player, this was a free-for-all mission.

The middle of the table would remain mostly untouched. The players instead decided to go head to head focusing on player elimination around the edges of the board.

This is where the game ended. I think that it is really interesting that the elite (veteran) forces are the ones that took a beating in this game. On the local tournament scene, most players take veterans for their durability.

Special thanks goes out to Dave Lamers for running the table and to Randall for helping Dave and for taking this report’s pictures.

If you wish to help support Must Contain Minis, we have a sales affiliate relationship with DriveThruRPG and the Wargame Vault. If you make a purchase from either of those sites after using one of the links on this site, a portion of the sales goes towards supporting Must Contain Minis.

Must Contain Minis is also a participant in the Amazon Services LLC Associates Program, an affiliate advertising program designed to provide a means for sites to earn advertising fees by advertising and linking to Amazon.