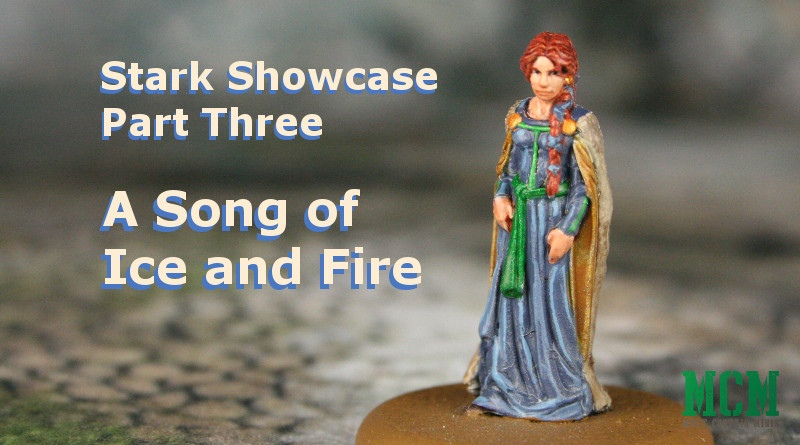 In this post, we take our third look at the special character Stark miniatures for A Song of Ice and Fire. I photographed these miniatures painted by Ullr’s Table and manufactured by CMON Games. The images turned out pretty good.

This time, we are looking at Sansa Stark, Maege Mormont, Brynden Tully, and Ser Roderik Cassel.

This is Sansa Stark is the oldest daughter of Eddard and Catelyn Stark. I showecased her brothers Bran and Robb in my first Song of Ice and Fire Stark post. In Game of Thrones, Sansa was often manipulated and controlled by the other characters. Later she comes into her own. In A Song of Ice and Fire, she is playable as a Non-Combat Unit.

Maege is the lady of Bear Island. When she joins a unit, she adds to their moral and even damages the enemy when her unit passes moral tests.

We have already seen Brynden Tully in our Stark Miniatures Showcase number two. This time, he is mounted.

Ser Rodrik Cassel comes as both a Unit Commander and as a Non-Combat Unit. You get to choose how to use him. In a unit, his unit charges into enemies better. Out of combat, when he influences a unit, the unit attacks better and cannot be weakened. Win-win.  🙂

Hopefully you enjoyed this showcase for a Song of Ice and Fire. I think it is very cool to see these Game of Throne characters on the tabletop and I like that the game is popular. I gave it a try myself a while ago and it is a good system.

Which of these characters are your favourite?