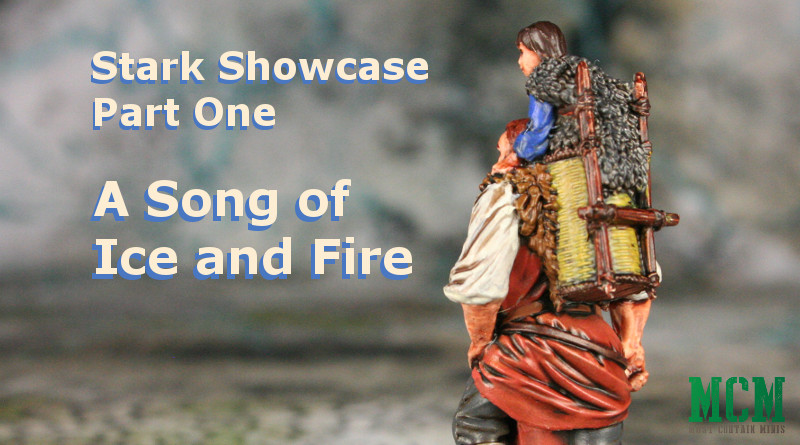 Born Stark is the oldest child between Lady Catelyn and Lord Eddard Stark of Winterfell. He becomes King of the North and has a Dire Wolf named Grey Wind. In A Song of Ice and Fire, Robb is a masterful tactician with a trait that helps him flank and outmaneuver enemies.

Grey Wind is the Dire Wolf raised by Robb Stark. He is not the official colour of Grey Wind, but I am sure that is okay. 🙂

Bran is one of Robb Stark’s younger brothers. The Lannisters pushed him out a window early on in the Game of Throne’s story. This act, rendered the young boy disabled. To help Bran, Maester Luwin designed a carrying basket to strap to Hodor (the Stark Family’s friendly giant). For the rest of the story, Hodor becomes Bran’s method of transportation. Sadly, Hodor isn’t the smartest person working for the Stark Family, but he does prove useful and strong.

Like all the other Starks, Bran also raised a Dire Wolf. He named his Summer. The official miniature listed as Summer by CMON is below, but he is painted as Grey Wind. Again, I see no issue with reversing the two Wolves or just going with them painted in non-traditional colours.

Hopefully you enjoyed this quick Showcase of Stark Miniatures. In this part one of the Stark Family Characters, we looked at Robb, Bran, Hodor, Summer and Grey Wind as painted by Ullr’s Table (and photographed by me).

Be sure to check out Part Two of our Stark Showcase as well.