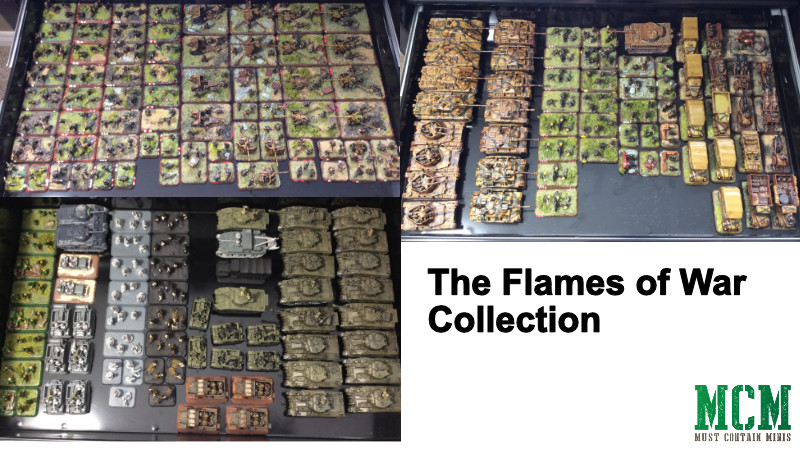 In this post, I take a quick look itemizing my Flames of War collection. Now, in straight up honesty, Flames of War is a game that I loved, but have not played in a very long time. I never made the jump to Fourth Edition. As such, I figured that I do a quick post showcasing the three armies that I collected.

Now, I have already sold off a large portion of my unpainted minis. You can check out some great pictures of those minis on my “Flames of War Army for Sale – Canadian/British Rifle Company” post.

If you want to check out my Flames of War posts, Must Contain Minis has an entire section of the site dedicated to the game.

Now, let’s take a look at what I have in my miniature drawers.

I always liked Infantry better than tanks when it comes to my WW2 games. Because of this, I collected a large number of infantry and big guns. Below is my drawer of Heer Infantry.

My German armour started as support for my Heer Soldiers, but grew into two armies. My favourite list for them was from the book Desperate Measures.

On top of the two drawers of Germans in my collection, I also have a drawer of allied units. These are mostly British units, but there are Americans in the mix too. I planned to paint these first, but I painted them last because there were no British paints available when I bought the units.

In addition to armies, I had entrenchments for my 88 guns, some objective markers and some terrain. These final images finish up what is in my collection.

Hopefully you enjoyed this quick article showcasing my Flames of War Collection. I had a lot of fun gaming World War 2 in 15mm with this collection.

It doesn’t get used much anymore, but someday it might hit the table again, be it my table, or someone else’s.