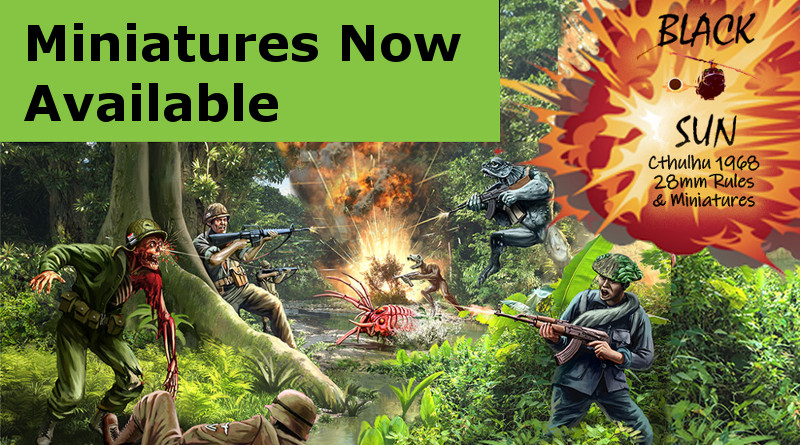 Lately I posted a number of articles about Black Sun. Black Sun was a Kickstarter Campaign combining the Vietnam War with the Call of Cthulhu. A cool concept. Personally, I am a big Cthulhu fan. Sadly, the Campaign did not meet its funding goal on this second time around.

If you liked the miniatures though, have no fear. Crucible Crush decided to make the minis available. They are actually now available on their web-store for pre-order. The plan is that you can pre-order them from now until August 19th (2019) at a discount directly from them. After August 19th, the minis will go down and not go back up on the site until November. In between the dates, Crucible Crush intends to mail out the pre-orders.

It also sounds like the team will be flushing out the Black Sun world further before deciding how to proceed with the game.

As such, the posts on this site about the miniatures are still relevant. Check them out

The miniatures for Cthulhu 1968: Black Sun are truly neat. They might be of interest to you as miniatures for other games. Cthulhu miniatures are just awesome while the US and Vietnam miniatures are a great fit for historical collectors. Below is a round up of the articles I wrote about the miniatures. Click on the pictures to visit the corresponding article.

Overall, these are some nice minis.

Despite the Black Sun Kickstarter Campaign not reaching goal, the guys at Crucible Crush decided to make the minis available. If you like what you see, be sure to check out their pre-sales page.