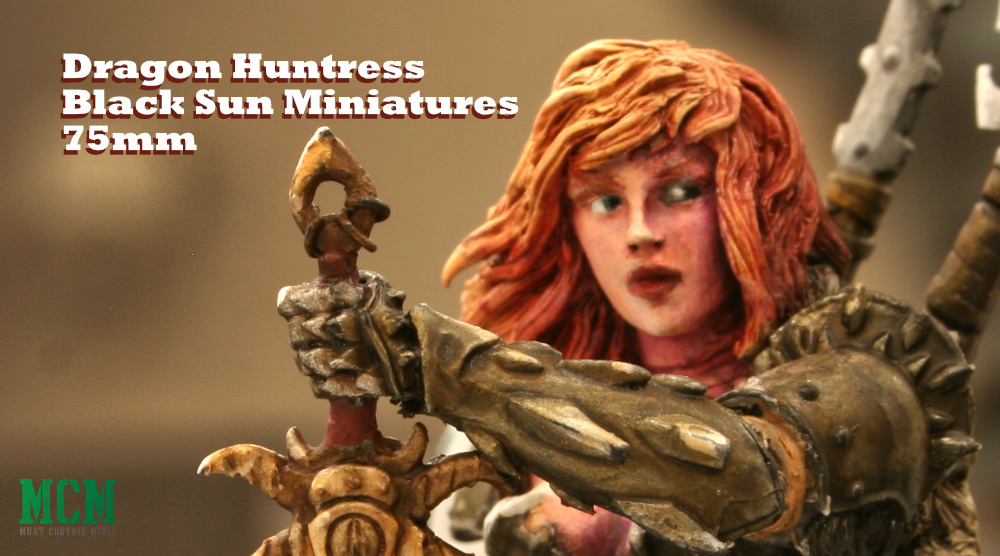 In this post, I carry on with my showcase of miniatures from the Sword and Brush 2019 Painting Competition. This time, I showoff a Dragon Huntress as painted by Ramy Tawil. Black Sun Miniatures from the United Kingdom sells this 75mm miniature. Now, let’s take a closer look.

While at Sword and Brush, I talked to a few of the painters in the painting competition. Ramy Tawil was one of them and he showed me his miniature with enthusiasm. That enthusiasm is well-founded as he did an excellent job on painting this miniature. Check it out.

The model is 84mm from the bottom of the foot to the top of the head and scaled to fit in with 75mm miniatures. For us gamers, that is generally too large, but we can also certainly appreciate the skill that goes into painting a model like this.

The figure comes from Black Sun Miniatures in 14 resin parts that need to be assembled.

As you can see, Ramy put a lot of work into the model. The sword has cool cosmic effect to it and the highlighting and shading of the model looks great.

Black Sun Miniatures is a company that I did not know much about before this post. They are out of the United Kingdom and the only reason that I heard of them before is because they share a very similar name to a miniatures Kickstarter game that I have covered on this site a fair bit. One of my readers mentioned the similarities.

Their main online shop seems to carry mostly 75mm miniatures and busts. They also offer a number of 30mm, 35mm, 54mm, and 75mm miniatures plus busts in their clearance section.

I touched base with Ramy before publishing this article. He spent about 5 to 6 months working on this model before the contest. Most of the work though, he did just before the contest. Late in the game, Ramy learned some more advanced painting techniques such as glazing, painting directional light and painting enhancing shading. He spent a lot of time executing these new techniques on the model because he wanted to do well in the competition.

The night before the contest, Ramy spent 6 to 7 hours finishing up his model and went to bed at 2am. A job well done.

What he likes best about his work on the model is the Dragon’s Head and the Greatsword. This was the first time that he painted a cosmic effect and it turned out great. He also took his directional lighting and shading to a whole new level on this figure. Ramy shadowed the dragon head below the body of the Huntress and also made the horns on the back of the dragon head cast shadows to the ground.

Take a close look at the left side of the face. There is some really nice shading going on there.

Ramy said that what drew him towards painting this figure is that she resembles a Dungeons and Dragons characters he once played. A female Barbarian-Beserker who wielded the legendary greatsword Blackrazor. This sword was made by the Raven Queen to steel the souls of those it slays.

I think it is cool that his gaming inspired him to paint this great looking miniature. It just goes to show you that great artwork can go hand-in-hand with great games.  🙂

Hopefully you enjoyed this quick article showcasing another miniature from Sword and Brush 2019. I have a feeling that there were a couple hundred models entered into the competition, but I have four more models to post on Must Contain Minis before I am complete with this series. I hope you join me to check out those models too. Check them out and more on my Wrap Up Article gathering together every single Sword and Brush 2019 article that I wrote.

Before signing out, Ramy did want to give some shout-outs to people that helped him before the contest. Special thanks goes from him to Jay and Chris from Lords of War, Dave and Johnathan from Command and Colour and to Alex Zimmer.