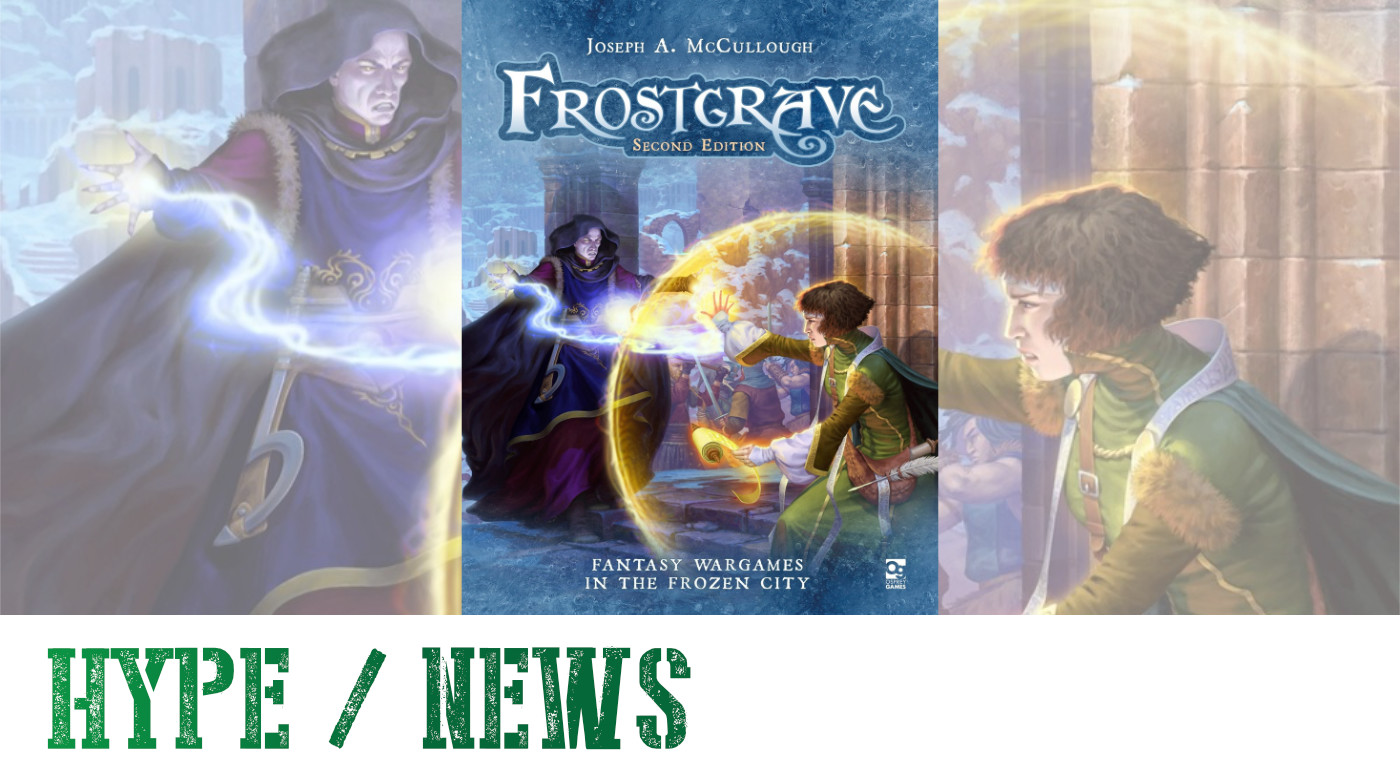 Frostgrave Pre-Orders are up and Frostgrave Second Edition sets to release for August 20th, 2020. Osprey Games shared a few teases about what to expect and I really want to get my hands on this book. This post focuses in on the places where you can pre-order the book. Of course you can continue to order from these sources (and others) once the pre-sales are over too. Today, we look at the sales on North Star Military Figures, Osprey Games, Brigade Games Miniatures, and Badger Games.

Before getting into the pre-order deals, I will talk a little more about Frostgrave Second Edition.

For those that don’t know, Wizards battle for supremacy and artifacts in Frostgrave. The action takes place in a the frozen ruins of an ancient city. There, a Wizard and Apprentice takes on a warband of up to 8 others against their opponents (and the random monsters on a gaming board) to collect treasure off of the tabletop. The game is a ton of fun and I had a blast with first edition.

Frostgrave runs on a D20 system and very much feels to me like a RPG experience in a miniatures skirmish game. Between each mission, your Wizard and Apprentace improve, and you can decide how to upgrade your Warband too. This makes for some great campaign games. In fact, three back-to-back games of Frostgrave in an afternoon makes for a great gaming experience in my mind.

Frostgrave Second Edition takes what worked in First Edition and makes it better. I expect that we will see some rule changes that will make the system more inline with Frostgrave Ghost Archipelago with your crew members. Joseph, the author, also revamped the 80 spells in the main rule book to make all of the spells more useful. In the First Edition, certain spells worked better than others. After seeing which spells became most prevalent over the years, Joseph figured out a way to make all of the spells desirable. I am looking forward to seeing those changes myself.

Now to the meat of this article. Frostgrave Second Edition releases on August 20th. Now, where can you get this book as a pre-order? Well, the best places include North Star Military Figures, Osprey Games, Brigad Games USA and Badger Games. You can also buy it from Amazon, but I say that because I am an affiliate and a portion of a purchase there goes to help support Must Contain Minis.

That said, I think you are best off if you purchase from one of the four companies that I mentioned earlier. The best being North Star Military Figures.

If you buy from North Star Military Figures, they will give you a free miniature of a Thaumaturge Apprentice along with the purchase of any of their Frostgrave Second Edition Pre-Orders on the books. You buy the book from them, you get the miniature.

When I think of Frostgrave pre-orders, I think of North Star Military Figures. They manufacture the miniatures and have close ties to Osprey Games. I outlined just a few of their pre-order deals. Head to their site to find more. I believe the Frostgrave 2 deals and bundles are good until August 20 (2020).

Don’t want to order direct from the miniatures manufacture? Osprey Games is also running pre-orders now. I find the North Star Military Figures pre-sales options much more interesting, but Osprey Publishing is a great company and I certainly won’t discourage anyone from supporting the company directly. You could also purchase some of Osprey’s many other books while you are there.

Brigad Games is North Star Military Figures North American partner. If you want order deals similar to what North Star runs (but in the USA), this is where to go. They have the same deal where you get the Apprentice miniature for free if you buy the second edition rule book. You can find this on their Frostgrave 2 pre-order page along with the plastic Frostgrave Knights.

Badger Games also sells Frostgrave Products in America be sure to check them out if you are looking for a supplier in the USA.

Hopefully you enjoyed this quick article about Frostgrave Pre-Orders. I am a huge fan of the Frostgrave game system and am really looking forward to the new edition. I can’t wait to see what is in there.

If you are in a similar boat, you can pre-order the game too. Places I would direct you to do so include North Star Military Figures, Osprey Games, Brigade Games Miniatures, Badger Games and Amazon.

As a tip for my Canadian readers, I personally find it better to order from the UK than the States for reasons of shipping costs and customs fees. I tend to order straight from North Star Military Figures and Osprey Games.

Until next time, Happy Gaming everyone!!!