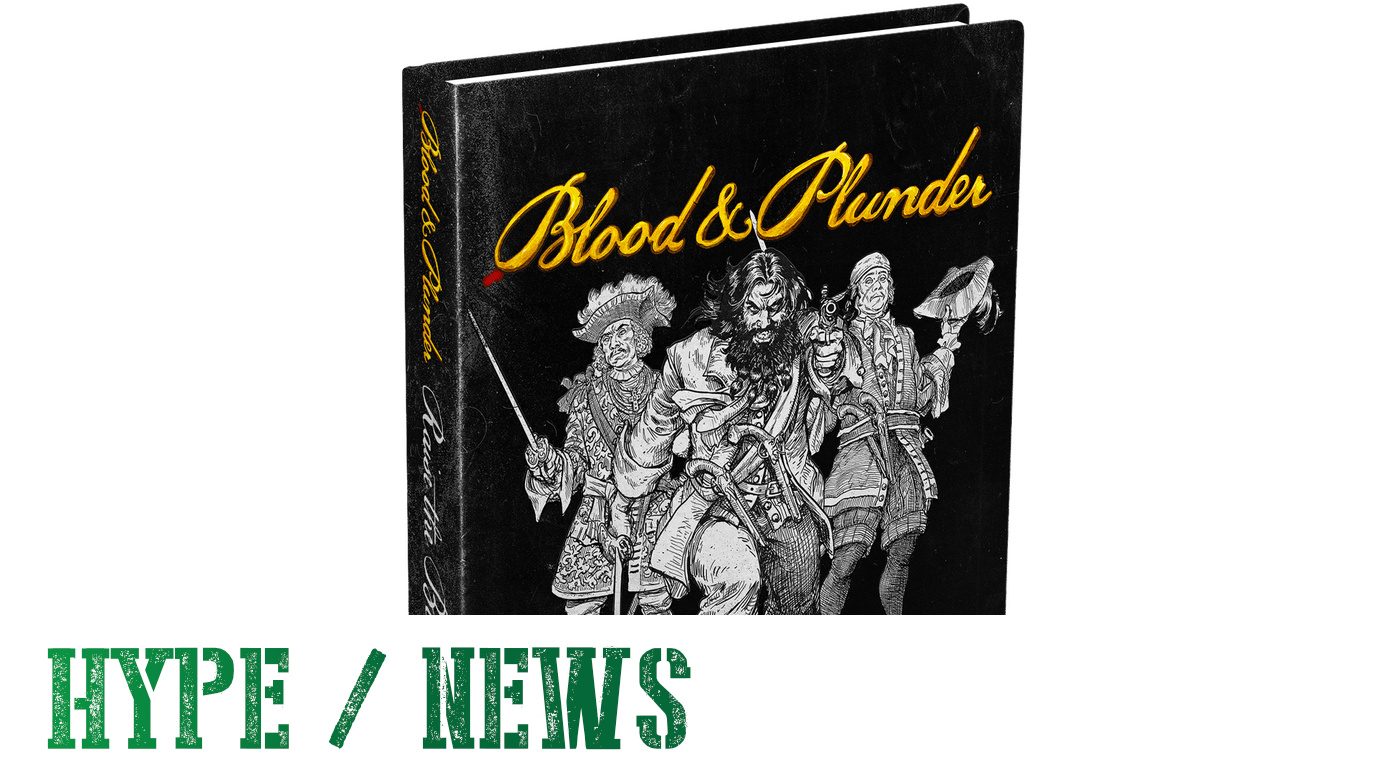 Firelock Games served up some Blood & Plunder News this weekend at the Cyber Wars virtual gaming convention. Among the news was plenty about both Oak & Iron and Blood & Plunder. This news takes us right up from today all the way up to the end of 2020 (and maybe even into the start of 2021).

First off, some of this news might be a recap of shifting projects. COVID-19 really put a kink into the guys’ plans. They released Oak & Iron right as the Coronavirus made its impact on the world. This makes getting the game to take off a little tougher. Likewise, Firelock Games originally planned on running the Raise the Sail game in May, but that has been pushed out to the fall.

In this article, we discuss Oak & Iron, Queen Anne’s War and Raise the Black.

Oak & Iron the game has been really well received but released with bad timing in line with the Coronavirus. Firelock Games had organized play, convention games and more expansions ready to go, but that was put on hold due to COVID-19 destroying the convention scene this season. Fortunately, the game is available by Tabletop Simulator for people to play. This helped build a community and kept the game going and growing during COVID lock-downs.

There are some new ships sculpted, but when they will be released, they do not know right now. They still plan to release an updates box near the end of the year to give you all the materials changed in the Errata so that you can have all the play materials in the same quality of materials. Of course, this is an optional box and you will be able to get the contents through PDF too.

After quickly discussing the news items for Oak & Iron, Mike Tunez Moved along to the upcoming Blood and Plunder products.

Firelock games shared a lot of Blood & Plunder News at the Cyber Wars. Among the news items were two expansions and the releases that go with them. Before getting to those, I do want to mention that Firelock Games also came out with Solitaire Rules for Blood & Plunder. I missed sharing that information when it occurred, and you can get them from the downloads section of their website.. With that out of the way, let’s take a look at what the guys leaked to us about their upcoming products.

The first expansion that the group discussed was Queen Anne’s War. This will be a PDF expansion set to come out for the Fall. This is the first major conflict of the 18th century and the book will cover that and the 17th century. This is the age when the time of the boucaniers ends and the golden age of pirates starts.

The book will first be released as a PDF that you can in essence play test as a community. They will then take community feedback and revise the PDF. The new PDF will be provided for free to the people that bought the original PDF. That version will then be released as a book later. At this time, the price for the PDF is not yet known.

The book is expected to be 50 to 60 pages. Fortifications will not be covered in this book, but the rules for fortifications (and mortars) may come out as free PDF rules.

Queen Anne’s War will come with a number of new factions and options for players to take. These factions include the last of the boucaniers, new native factions, and army factions. Apparently the army faction is going to have a lot of fire power!

The expansion comes with a large number of new units. Many of them can be played with the models that are already out there. There will also be a few new models. Mike said that there will be at least 9 new models related to this expansion. Depending how this goes, there should be 2 to 3 new model units. I am guessing this means that we can expect 9 to 13 new models from Firelock Games related to the Queen Anne’s War Blood & Plunder expansion.

I believe that new figures are related to the braves currently listing on the Firestarters Page.

Now this expansion is one that I hope to have funds for when I see it come out. Raise the Black is going to be a Kickstarter project where they propel the game forward along the timeline. Not only are they propelling the game’s timeline forward, they are also making the jump over to plastic! I love working with plastic models so this is a campaign for me.

Raise the Black brings plastic miniatures to the high seas of Blood & Plunder. I am really excited about this because I like working with plastics. There is something about assembling plastic models that I just enjoy. To double check, I asked it the new plastic models will be inline scale-wise with the current metal figures. They will be. Although they plan to move to plastic, Firelock Games plans to keep some miniatures in metal, but to move away from resin.

Even more exciting than the plastics to me is that Firelock Games plans to release a two player starter set in plastic! That I have to get my hands on!!!

Now here is some really exciting news. Firelock Games plans to release a two player starter set with all plastic models. This is the goal of their upcoming Raise the Black Kickstarter. Below are the details that they leaked at this event.

The Sloops in this starter set are plastic Bermuda Sloops. They are smaller than the old Sloops (similar sized to a Bark) and pack more firepower. The timeline moved forward, so the way they built the ships improved.

As a note, the plastic models inside the starter set will be available separately too.

Compatible with the Old Sets

Even though the timeline moved up, Mike mentioned that you can still use your most of your old miniatures in the new era. Some units may not have a place (like Lanceroes) but many of the other ones you can use for Raise the Black. Also, as mentioned earlier, the plastic figures will be scaled as an exact match to the metal line.

They are still planning how to deal with points and it sounds like they might make the two eras compatible for competitive play. They would do this by charging more points for the new era models than the old era lists and units. It should be balanced, but you can also limit tournament themes to years if you wish.

It will be interesting to see how things unfold.

The guys at Firelock Games are hoping for a number of outcomes related to their next Kickstarter Campaign. These hopes include raising enough funds to work on the delivery of:

Firelock Games recently partnered with 4Ground to create some great looking terrain. This terrain is available now and the 4Ground stuff will eventually replace most of their resin terrain. The exception to this is the fortifications. That said, check out this pirate’s cove made by 4Ground. Wow!

If you haven’t seen these kits, head to their website and check them out for yourself.

Thank you for joining me in this post looking at the latest news out of Firelock Games. There is a lot of exciting stuff coming here and I am excited to see the company moving again. Let’s be honest, COVID-19 slowed down the progress of everyone and I am happy to see that Firelock Games remains healthy and strong.

The Oak & Iron news is really cool and Queen Anne’s War is certainly interesting, but I am super keen on the Raise the Black Kickstarter announcements. I can’t wait to see what is coming up from Firelock Games.

If you want to learn more about their upcoming releases, check out the recorded round table discussion below. No Dice No Glory recorded this one for HMGS’s CyberWars virtual convention. The host of the discussion runs Blood and Pigment, a really good blog that focuses only on Blood & Plunder.

Just a reminder that Must Contain Minis uses an affiliate sales system to help cover its costs. If you order from Amazon or DriveThruRPG from this site, then a portion of the sales goes to keeping Must Contain Minis going. Firelock Games has a couple of books available through DriveThruRPG and I just bought myself a copy of Blood & Valor from that very site.

Finally, please feel free to leave a comment below on your thoughts about what is coming from Firelock Games. I personally read every comment that comes in.