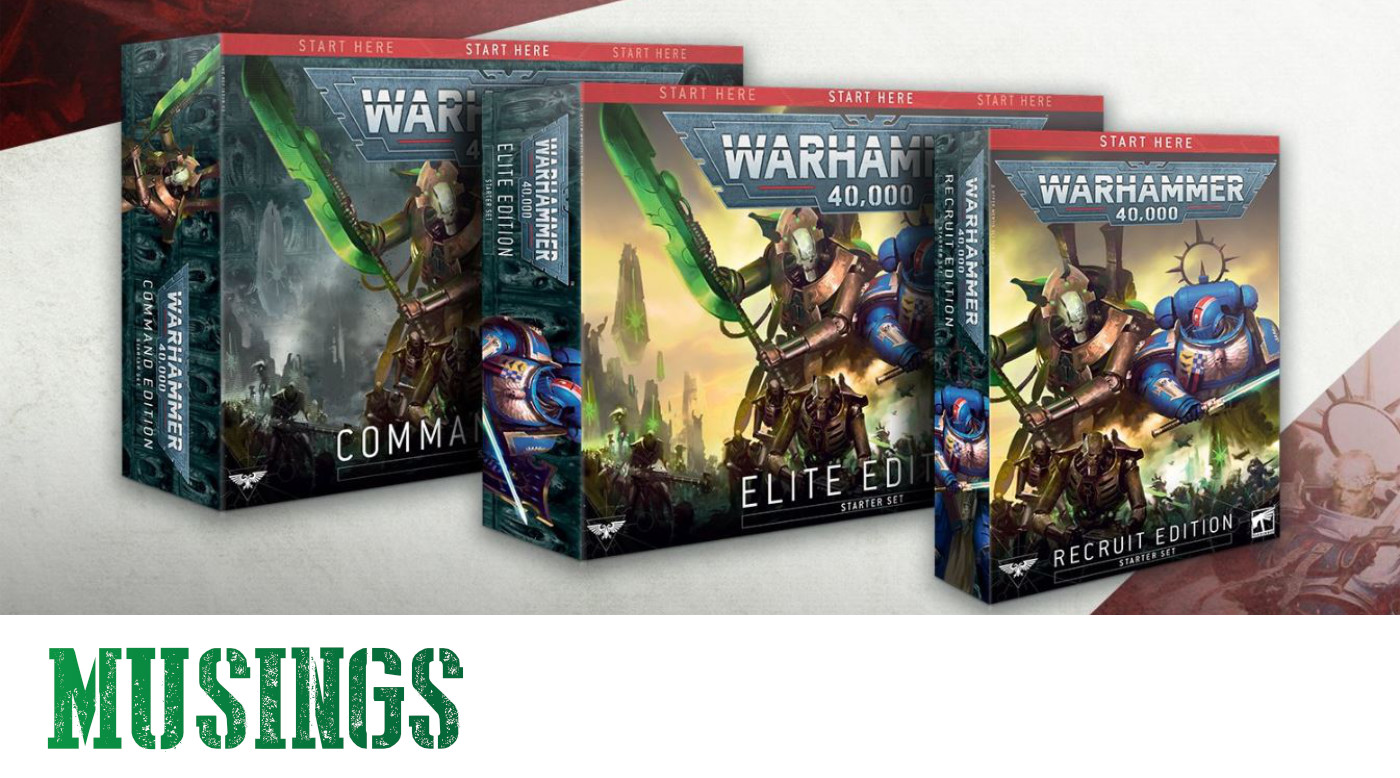 New Warhammer 40K Starter Sets are on their way!!! I missed Indomitus, but I hoped for something like this. GW just announced the upcoming release of three new starter sets for 9th Edition. I must say, I am impressed.

Games Workshop made a smart move coming out with three different levels of starter sets. This will give potential customers choices on how to get into the game and how much to spend.

A lot of people, including myself, got caught up in the hype of Indomitus. GW themselves marketed the box as their best valued starter set ever, and I think they might be right. My buddy asked me to split the cost of a box with him. I told him that I still found the box to be too much money (for me) and the timing is not quite right. The models I like in Indomitus include the Lieutenant, the Eradicators and the Assault Marines. Sadly, I feel compelled to pass over the others. I find the Necron character miniatures more appealing than the Space Marine characters in that boxed set.

In my post pondering “should I get into 40K,” I talked more about Inodmitus and what I thought of the models. My interest in 40K to start is smaller games to start. Perhaps Combat Patrols. With three levels of GW starter sets, one of them might be right down my alley.

As a note, all of the images in this post are from the announcement article on the Warhammer Community website.

Of the new Warhammer 40K Starter Sets, this one captured my eye. When the time comes for me to buy, I plan to buy this one. The reasons for this selection include its size, included models and hopefully its price-point. I believe this box might be a nice entry point for people who want to get a taste of 40K or for parents thinking about getting their kids into Warhammer 40,000.

I find it very interesting that this box comes with 14 Necrons and 6 Space Marines. It looks to be an asymmetrical battle as the Necrons outnumber the Marines more than two-to-one. I never played against Necrons in the old editions, so it will be neat to see how they measure up to each other.

Want to spend a little more on a starter set and get more bang for the buck? Games Workshop covers customers there too. The next level up contains more models and what looks to be a different book.

In this boxed set, I really like the Necron Commander. It looks great!!! I also like that the box comes with more Assault Primaris Marines, but I am not a fan of those bikes or that character. Now this is my opinion and I recognize that it is subjective. Others might totally love the miniatures that I dislike, and that is totally okay. Likewise, some people might not like the models I do. It is all opinion based.

Overall, this looks like it would give you a better taste for the game, and likely a better stepping stone too. I envision people buying the Recruit box and moving right along to this one afterwards. Anyone who does this will have 15 Space Marine miniatures and 32 Necron Models. The Necrons are still outnumbering the Marines more than two-to-one. Sounds like it could make for some interesting battles to me.

The Commander Warhammer 40,000 Starter Set is Games Workshop’s top tier starter set of the new collection. I expected this one to be different from the others by having more models. To be honest, I thought it would be the same as the Indomitus boxed set but with a softcover rule book. It is not. The Commander Starter Set basically takes the Elite Starter Box and adds in plastic terrain and the full rulebook.

An interesting move on GW’s part for sure.

Games Workshop is certainly doing things right. I always have my eye on them, and when I see new starters, I often feel the urge to join in on the new fun. Coming out with three levels of starter sets is really smart. That way customers can choose how much the hobby is worth to them and how they want to get in on the system.

This captures players serious to the game (although those people likely already bought Indomitus), curious about the system (all new starters), and at various levels of expendable income (three levels of buy-in at different price-points). What some people find expensive, others do not (and vice versa). I learned that pretty quickly doing reviews.

For me, the right price range for a starter set is $40 to $120. For others, this will be different. But at those price-points, you have my attention. It is my guess that one to two of those new Warhammer 40K starter sets will fall right into that range. If I see that small starter set and the price is right, I am buying it.

How about you? Are you getting into the #NEW40K? For me, it is on list of things to check out.

Until next time, Happy Gaming Everybody!!!