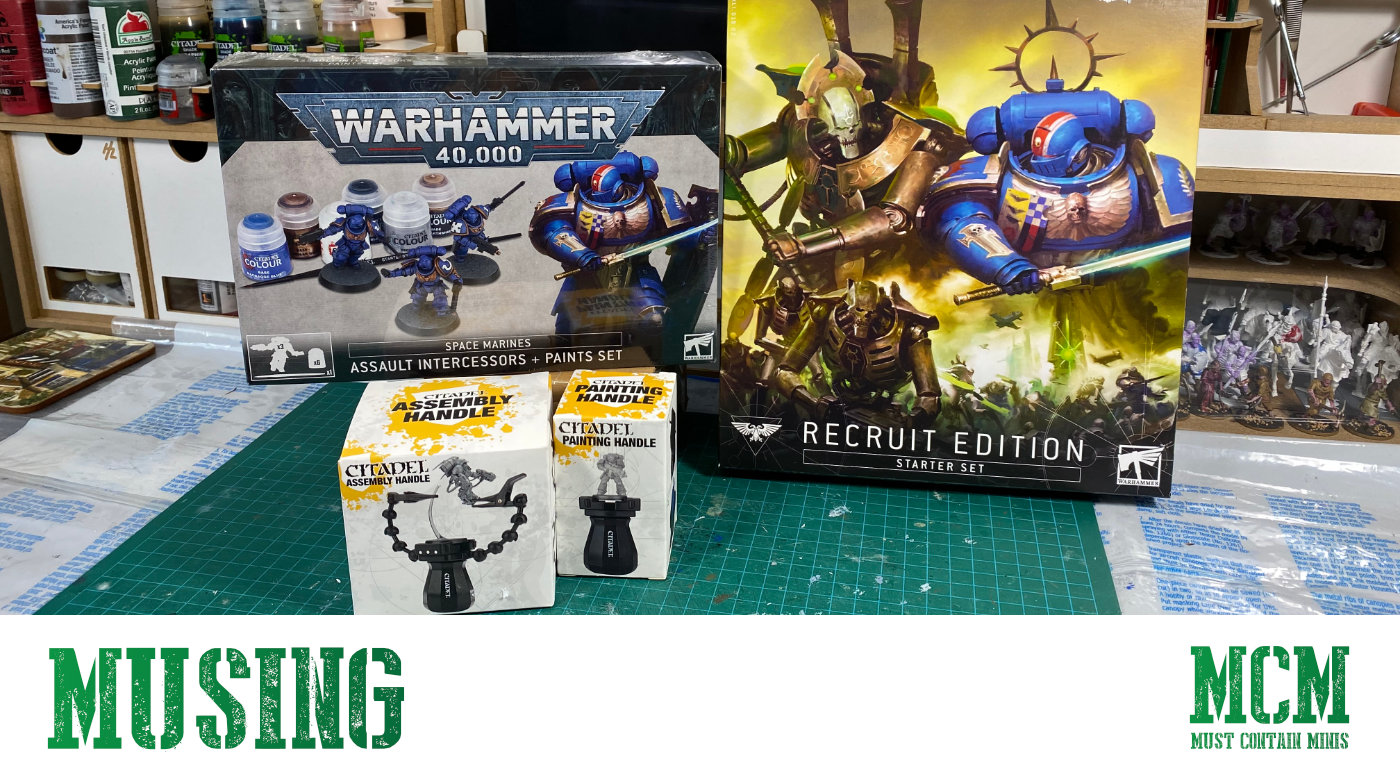 When I looked at the new Warhammer 40,000 starter sets, I decided that I am buying into the New 40K. It has been a long time since I last bought a Games Workshop game, but I felt the pull many times. Finally I took Games Workshop’s bait and bought back into 40K.

Having sold of my previous collections of Warhammer 40,000 (Space Marines, Tyranids and Astra Militarum), I am starting from scratch for 9th Edition.

To start, I bought myself the Warhammer 40,000 Recruit Edition Starter Set. Along side it, I bought the new Space Marines: Assault Intercessors + Paints Set, a Citadel Painting Handle and a Citadel Assembly Handle. I also wanted to buy the Necrons: Warriors + Paints Set, but only had so much budgeted.

As a note for those who come on a later date, the products I discuss in this post are all part of Warhammer 40,000 9th Edition.

When buying into the New 40K, there are a few ways to go. You could buy into the game piecemeal like I tend to do with many of my other games, or you could buy a starter set. Buying a starter set would be the way I suggest you go with Warhammer 40K because you get everything you need to start.

So, what is the best starter set for 40K? That is a bit of a trick question and depends on what you are after. For the best value on money, I would suggest you buy the Indomitus box set if you can still find it. It is a limited edition release so it might be hard to find now. Check your local retail stores to see if they still have stock.

After that, I would suggest it which starter set to buy depends on what you are after. If you want the travel sized rule book and some terrain, look into the Command Edition Starter Set. If you are looking for just a taste, go with the Recruit Edition, and if you are looking for something in-between, get the Elite Edition Starter Set. For more about the starter sets, check out my post “Life After Indomitus.”

Personally, I think the best buy to get into 40K today is the Indomitus boxed set, followed by The Command Edition and Recruit Edition Starter Sets.

Why I Chose the Recruit Edition

I chose the Recruit Edition of the Warhammer 40,000 starter set because I just want a taste of the game. It also fit within my limited gaming budget.

I wish that all three of the starter boxes came with rule books, but they don’t. Only the Command Edition does. Indomitus also comes with the rule book, which is part of the reason that I feel they are the best starter set buys.

That said, I don’t need (or currently have time to paint) all of those miniatures. I have plenty of projects on the go, but I want to give the New 40K a try. A taste of the game, if you will. That is what helped pull me towards the Recruit Edition of the game.

In the Recruit Edition starter set, you get 20 miniatures and the materials to play an introduction style of the game. For me, that will do for now. It will give me a taste for the game and what to expect if I buy further into the system.

I think this Starter Set is best for those who just want a taste, those on a budget, or those with kids and want to get their kids something to try before buying deeper into the game.

I bought the Space Marines: Assault Intercessors + Paints to get started with painting my 40K miniatures. I am going to paint them up in the standard Space Marine Colours, so this is perfect for me.

Games Workshop puts 3 miniatures in this boxed set. I wish that they put in 5 Intercessors instead of 3 because to make up half a unit because I would like to take the Intercessor group up to a full unit of 10 soldiers. Now I have to figure out how to find just two more Intercessors at an affordable price.

I guess if I also bought the Command Edition, then I would get the rule book along with 5 more Assault Intercessors to take the group up to 10. That said, I would still need to buy the paints and this box gives me the paints that I need. Plus the box comes with miniatures on which to practice.

Thank you for joining me in this quick article about how I am buying into the New 40K. This is a journey that I plan to take slowly, and I am looking forward to seeing where it goes.

I also bought a Citadel Painting Handle and a Citadel Assembly Handle in this purchase. Neither of those purchases are essential to getting into Warhammer 40,000. As such, I did not talk too much about them in this article. That said, I wrote a review of the assembly handle.

For those wondering, I purchased these products from J&J Cards in Waterloo, Ontario, Canada. They have great prices and are one of the local gaming stores that I like to visit.