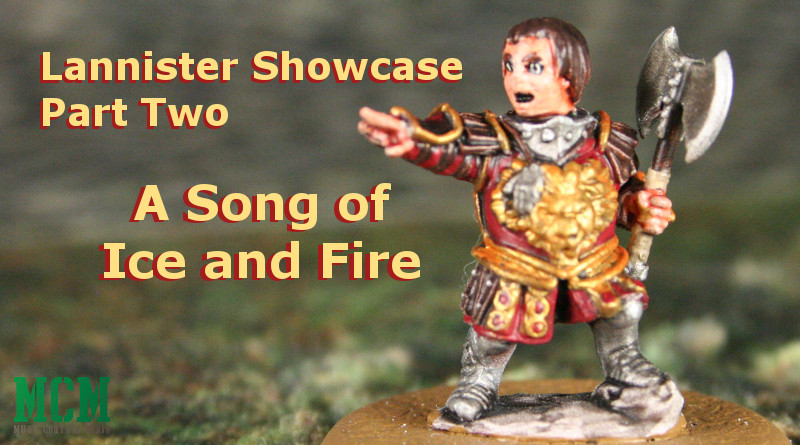 In this post, we take a look at the expanded Miniatures from the House of Lannister in a Song of Ice and Fire by CMON Games. These miniatures came as a part of the Kickstarter Campaign and are not in the core box. Some of the miniatures are now available through the Lannisters Heroes Set One Boxed Set. The specific minis in this post include Maester Pycelle, the Guard Captain, the Assault Veteran, and an alternative sculpt of Tyrion.

Ullr’s Table in Cambridge (Ontario) painted these miniatures, and I photographed them. Now, let’s take a closer look.

As mentioned in our previous post, Tyrion is one of the more likable of the the Lannisters (despite his flaws). In this mini, he poses for battle with an axe in hand.

If you want to get this model today, it is in the Hero Set 1 for the Lannisters.

The Assault Veteran brings extra experience to the fight. I don’t know too much more about him at this time, but he does look cool!

This guy is the Lannister Guard Captain. Again, I don’t know what abilities he brings to the game, but I will be staying out of his way.  🙂

Maester Pycelle focuses on weakening his opponents. I am not sure what he is offering, but I would not drink it!  🙂

Hopefully you enjoyed this quick Showcase article in our second look at the Lannisters from A Song of Ice and Fire by CMON Games. Special thanks goes out to Ullr’s Table for allowing us to photograph the miniatures he painted on commission for someone else. Thanks also goes out to Cigar Box Battle for sending us the battle mat that we used as backdrop. Their gaming mats are awesome and also happen to make perfect backdrops to pictures!

As stated in our 2018 Year in Review Article, we are looking for painters local to the Kitchener / Waterloo area (Ontario, Canada) that want to show off their painted miniatures in showcase articles.

If you are interested in more Lannister Showcases, be sure to check out our round up article.