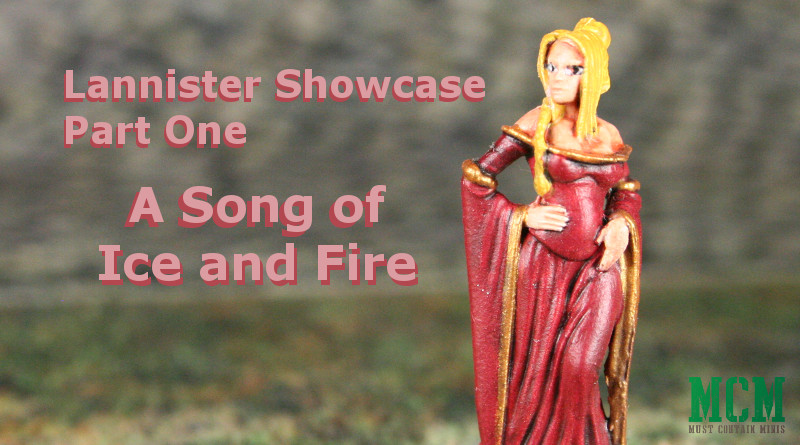 Now, let’s take a closer look at the miniatures.

From what I have read and seen in the TV shows and books, this is a woman that I would not want to cross paths with. She is extremely dangerous!

Jaime is Cersie’s brother. Early in the story, we learn all is not right with their relationship!

Tyroin, also known as “The Imp,” has got to be one of my favourite characters in the Game of Thrones stories. While he doesn’t come from the nicest of families, and he is a bit of a slimy character, there are likable aspects to his personality. He seems to be the only Lannister with remorse for the misdeeds of his family.

Gregor Clegane (aka – The Mountain)

The Mountain towers over his opponents. The size does not come across in the picture, but this figure is huge!

Hopefully you enjoyed this quick Showcase article of the Lannister Character Miniatures from A Song of Ice and Fire by CMON Games. Special thanks goes out to Ullr’s Table for allowing us to photograph the miniatures he painted on commission before sending them back to his client. Thanks also goes out to Cigar Box Battle for sending us the battle mat that we used as backdrop. Their gaming mats are awesome and also happen to make perfect backdrops to pictures!

If you liked this post, be sure that you also check out part two of this series.

As stated in our 2018 Year in Review Article, we are looking for painters local to the Kitchener / Waterloo area (Ontario, Canada) that want to show off their painted miniatures in showcase articles. We also take in products from companies wishing to have their products showcased or reviewed on Must Contain Minis.