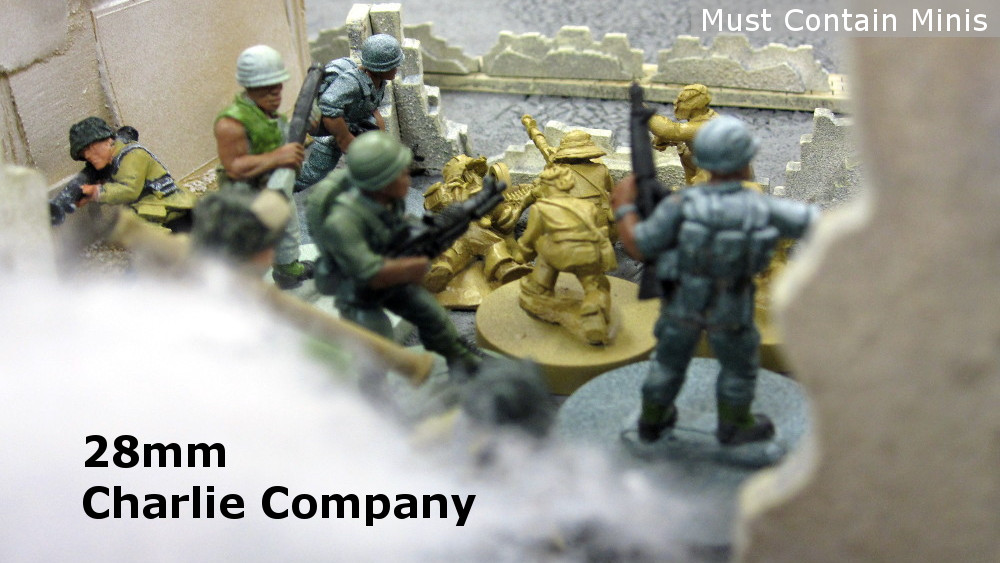 At Broadsword 5, I tried Charlie Company (by RAFM) in 28mm. For those that don’t know about Charlie Company, check out my play-through and initial impressions article from when I first tried the game. In this post, we take a quick look a 28mm adaptation of Charlie Company ran at a convention. This time around, a few modifications were made to the game – including changing the scale to 28mm.

That said, surprises still existed for both sides in this session. The Game Master had hidden knowledge for each force that the other side did not know (for example, the US used White Phosphorus grenades as smoke grenades).

This post is not so much a full Battle Report, but rather a quick article to let you know about my highlights from the game.

I played as part of the American’s team. Our goal was to enter the board on the left side of the table, reach a building on the other side to help some American Combatants inside.

As this is not a true Battle Report, I just wanted to quickly go over my highlights of the game.

First off, I was very excited that the Americans had a Tank to help them out.

The surprise related to that tank is that the crew in there did not want to fight. They locked themselves in there and didn’t bother shooting at anything until a number of turns into the game. 🙁

Still, a neat surprise that I did not expect from the Game Master.

Into the Hornets’ Nest

My next highlight was when my troops made an assault right into a mass of enemies. We assaulted not realizing that there were as many troops on the board as there really was. Yet another surprise in the game – hidden units.

I threw the smoke grenades to provide cover as my force assaulted a force in a building. Our goal was to take out a well guarded machine gun nest from behind so that our core infantry units could make their way down the road with the tank.

We did not know at this tank that the crew of the tank would lock themselves in and not participate for the majority of the battle.

We knew that our grenades would burn and cause irritation in addition to providing cover. My unit fully equipped themselves with gas-masks and protective gear. We threw the grenades to cut off the NVA Reinforcement group to the right.

We were surprised to find out that there was a gun crew in the building immediately to the right of us. The NVA hid a recoilless gun in there that could threaten our tank.

After we eliminated the machine gun crew, the recoilless gun crew opened fire on my unit with small arms fire. The only bonus to that is that we took their attention off of the tank.

Meanwhile, the NVA reinforcement unit behind us made their way through the phosphorus smoke and assaulted. We did not expect them to make it through so fast.

This battle put us on the back foot. We have one unit on our flank shooting at us with small arms while another unit assaulted us on the rear. My group is in trouble!

Across the street, another ambush popped on my unit.

My unit manages to take out the Recoilless Rifle unit and hightails it out of their. Instead of heading towards their objective, they retreat with what is left of their squad (dragging along the casualties with them).

Overall, I had a lot of fun with this game. I liked the the GM had a few surprises for us and it was interesting that they had opposing players play the NVA (instead of the Game Master).

Hopefully you enjoyed this quick little post of a game that I played at Broadsword 5. For those interested, Broadsword 6 runs this Saturday (August 25, 2018) in Hamilton, Ontario, Canada.

My First Play Through of Charlie Company – Battle Report