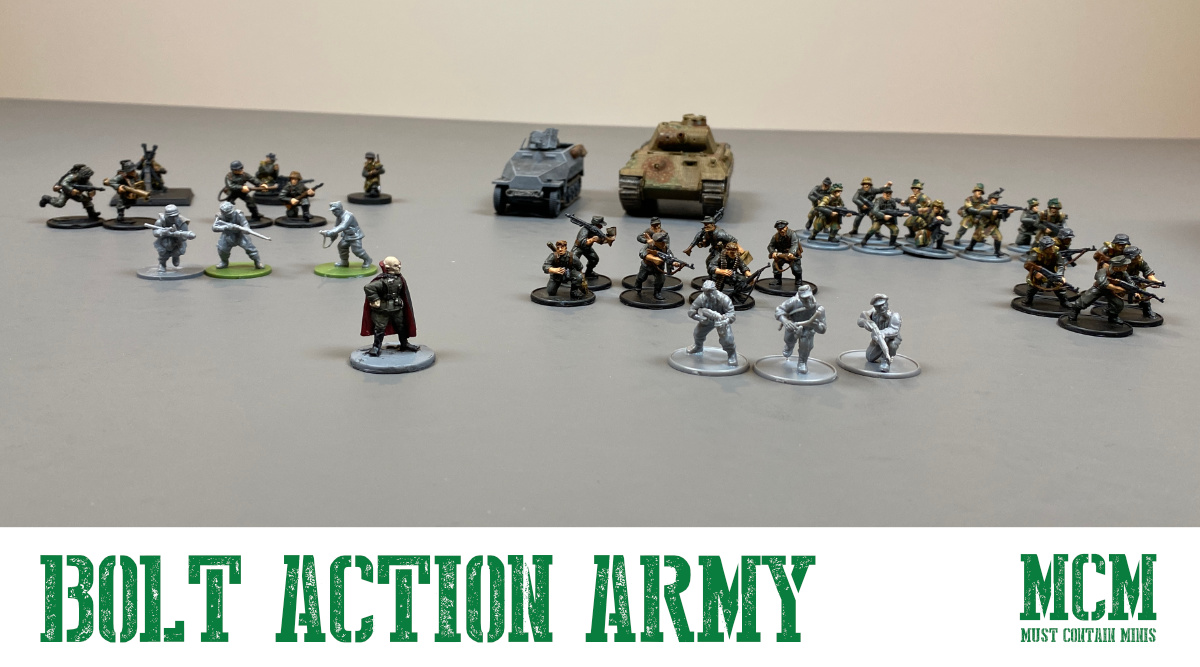 In this post, we take a quick look at my 1500 points worth of a German Army for Bolt Action.

For those who do not know of Bolt Action, it is a fantastic 28mm WW2 miniatures game. There are a number of Starter Sets out there including the brand new A Gentleman’s War that was announced today. That said, that is not what this article is about. Instead, I am going to show you my small 1500 point German force for Bolt Action.

Commission Painter Dave painted these up for me. Thanks Dave! You can find a showcase of his work here.

Bolt Action is a game about infantry, but lots of people take tanks and armored vehicles into their lists. This army has two pieces of armor.

I have to admit that not all of my miniatures are painted. The miniatures that I intend to use as the command team (a First Lieutenant with two helpers) remain gray.

If I take the game into the Sci-Fi realm for some Weird WW2 fun, this vampire leads the way.

Next up, let’s look at the infantry teams of my small German army.

When I designed the infantry units, I had a concept in my mind. One team acts as a firebase while the others move rapidly to their objectives.

The firebase brings two light machine guns to the field along with a number of rifles. The rest of the core infantry units in this list focus on the fast moving medium range fire power of assault rifles.

The three units above form the core of my German army. Now, let’s take a look at the specialist teams in this collection.

First up is my observer group. They could be used for any form of observation, but in this list, I took them as Artillery Forward Observers.

They might not be as good as the equivalent of other nations, but they do add a bit of a punch to the list that others might not expect (unless they also read this post).

On top of the observers, I brought along two small weapons teams.

The miniatures pictured above calculate up to about 1450 points when everything is taken at the Veteran skill level.

After these figures, I have three extras left that I did not fit into the list. These figures bring the points value up to 1500.

Below are three figures that I had remaining outside of my list.

To store the army, I use a Feldherr Mini Plus foam case actually designed for Bolt Action.

Below is a video review of that case. If the video below does not work, use this link.

If this case (or anything else by Feldherr) interests you, use my coupon code BOLT2022 to save 5 Euro off your purchase of 50 Euro or more. You can also check out their section for Bolt Action cases.

As a note, I do not earn a commission off of these links or the code, but Feldherr did supply me with the case for review purposes. The code is there to help you save money if it also interests you.

A Video Version of this 1500 Point German Army Showcase

Below is a video version of this post. If the embedded video below does not work, use this link here.

Thank you for joining me in this quick showcase article of my Bolt Action German Army. For those wanting more details, this is a German Reinforced Platoon using Veteran Panzer Grenadier squads as the main infantry units.

I used the Easy Army website for Bolt Action to create my list. That website allows users to create their own Bolt Action lists for free. I believe you can upgrade your account to save more lists.

GCMini.com is one of the sponsors of the site. GC Minis created a huge online store of many wargames, including Bolt Action and I have reviewed some of their stuff on MCM.

Thanks again for checking this out.

Frostgrave Demons and The Red King