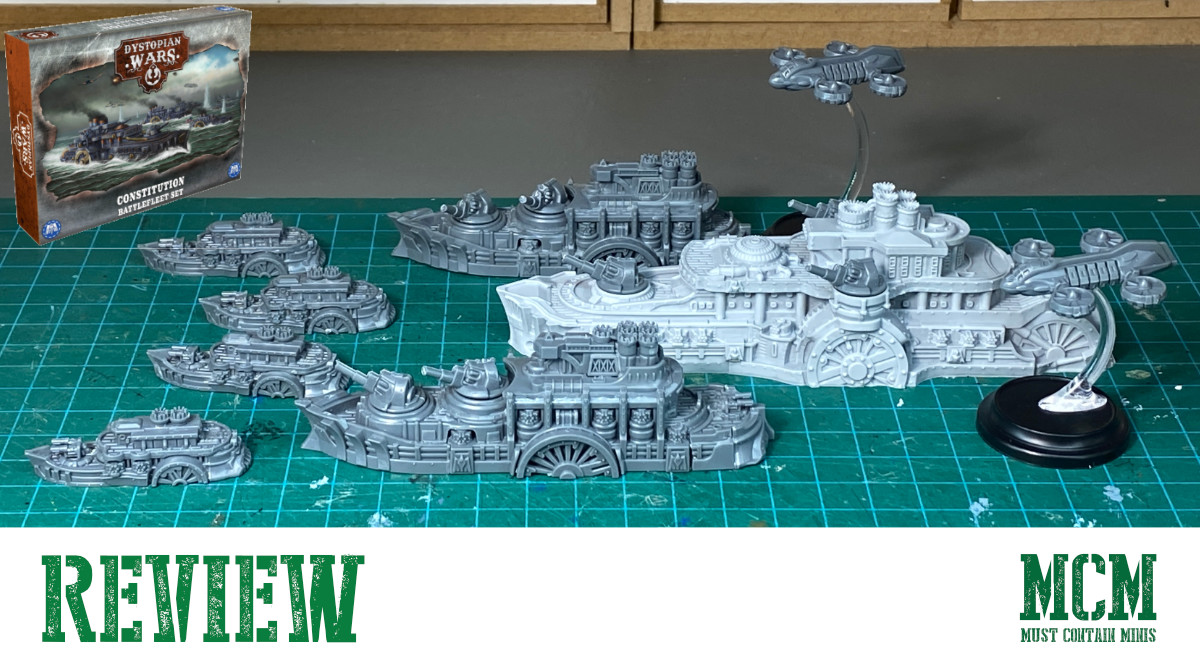 In this post, we celebrate America entering into Dystopian Wars with this brand new Constitution Battlefleet Review. If you have been wondering about these ships (or Dystopian Wars in General), then this post is for you!

In this post, you will get a good look at the ships of the Constitution Battlefleet, the sprues in the box, how the ships build and even a scale comparison image at the end.

Special thanks goes out to Warcradle Studios for sending me this product for review.

As with all of the products that I looked at by Warcradle Studios so far, this package looks good. They know what they are doing with their branding and artwork. Look at the cover art of the box. Really cool.

On the back of the box, Warcradle shows you all of the ship variants that you can make with this set.

Slip the sleeve off, and you find a nice box. It is the same style as the Tempelhof Battlefleet that I reviewed earlier. There will be a link to that review at the end of the article.

Inside you find the sprues to the models.

Inside the box, you find all of the sprues to these miniatures. Upon further inspection, I noticed that one of the sprues was cut into two pieces to fit into the box better. Let’s look at those two half sprues.

The Sprues of the Constitution Battlefleet

Now that we’ve looked at the sprue, let’s build some ships!

Building the Ships of the Constitution Battlefleet Set for Dystopian Wars

I found the frigates in this box set fiddly to build. They turned out nice, but they were more difficult to build than the destroyers in the Templehof Battlefleet that I reviewed earlier. Take a look at all of these pieces for a fairly small model.

At the end of the article, there is a link to the Dystopian Wars Build Guides. You can use that as a resource after you are done reading this review to help determine if this is a kit that you want to pursue.

Let’s look at one of the build pictures.

Once you build the ship though, it looks nice. Check it out!

You get four of these ships in the set. Here is a look at them from different angles.

Fortunately I found this ship to be the most fiddly in the bunch. It got better from here. Now, let’s move on to the Rotor Crafts.

I found the Arkon Observation Rotor to be the easiest ship to build in the whole set. They act as special escorts to your Flagship and Cruiser units.

Let’s move on to the Cruisers.

Building the American Cruisers – The Yorktown and Lexington.

You can build the cruisers in four different ways. To enable this flexibility, Warcradle packs in a lot of pieces. Check out this little pile.

I found the cruisers easier to build than Farragut Class Frigates. I built them as the two largest ships. The Yorktown and the Lexington.

The difference between the two ships build wise is that the Lexington has an extended rear deck with an extra gun.

More Pictures of the Cruisers

The Cruisers are so nice that I wanted to leave more pictures of them in this Constitution Battlefleet Review.

Personally, I like the look of these ships. I also liked that I found them less fiddly to build than the Farragut Class Frigates.

Now, let’s move on to the flagship. The Constitution.

The Flagship of the fleet comes in two resin pieces.

This Ship was easy to build, but I found this spot below a little bit of a mental chore to clean. I worried about clipping off part of the model.

With the piece clean, I built the model. You get the guns for the ship off of the plastic sprues. Don’t worry, this kit has enough big guns to arm all of your Cruisers and the flagship with the same weapons if you wish.

With all the ships built, let’s put them all together.

I’ve armed all of the big ships with Heavy Guns. If you want, you can sub those guns out for Heavy Rockets. Warcradle Studios gives you enough rockets to arm all the slots except one with Heavy Rockets. That just means that one of the ships has to take a generator or gun as an option instead of a full load of Heavy Rockets.

Before moving on, here is another image of the fleet.

What review would be complete without scale comparison images.

These ships are fairly large.

The next section gives you links to various related resources and after that, I am going to wrap up the review with my thoughts on the product.

Below you will find related articles and links that you may enjoy. They all act to either give you more information about Dystopian Wars or to send you to other articles mentioned in this piece. Let’s start with how you can obtain these miniatures.

Shopping for Dystopian Wars and the Constitution Battlefleet

If you are lucky enough that your FLGS or favorite online retailer sells Warcradle products, I suggest that you buy there. If this is not the case (or if you just want to buy from the manufacturer), you can check out Wayland Games. I placed links below to help steer you to the products.

In the interest of full disclosure, if you use an affiliate link, I get a small commission from your purchase at no extra cost to you.

Below are sites that will interest you if you want to learn more about Dystopian Wars.

Below is a list to related articles on Must Contain Minis.

A YouTube version of this review will go up in the weeks to come. When it goes live, I will link and embed it here.

I hope that you enjoyed this Constitution Battlefleet Review for Dystopian Wars. Overall, I like this model kit. That said, I do want to let you know that my opinion of it is that difficulty of the kit is at a slightly higher level than that of the Templehof Battlefleet set that I built earlier.

If you like the aesthetics of the ships in this post, or are looking for a model a little more complex to build than some of the other models in the line, then you will probably like this kit.

So far, I am really liking what I see from Warcradle for Dystopian Wars. How about you? Do you have a favourite nationality yet?

Right now, I am liking the Imperium, the Enlightened and the Commonwealth ships the most. That can change though as we see new products release.

As a note, the ships from the Constitution Battlefleet all belong to the Union fleet.

Thanks again for joining me in this Dystopian Wars Review of the Union Constitution Battlefleet.