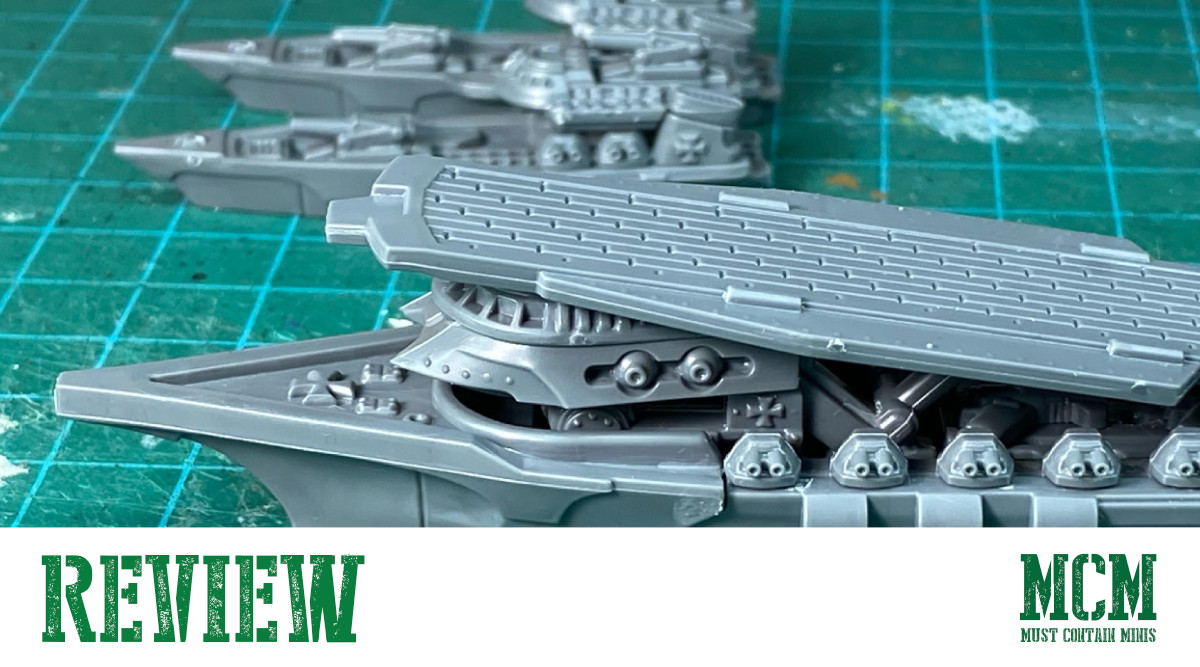 Have you ever wondered about the Tempelhof Battlefleet Set, or the other ships, in the newest version of Dystopian Wars?

In this post, we take a close look at the new Tempelhof Battlefleet for the Imperium Faction of Dystopian Wars. In this review, you will see the sprues and the unboxed product. I also show all the variants of the ships you can build with this set and talk about my thoughts on the collection. To end off, I even share a scale comparison image. That image will give you a sense of the size and scale of these miniatures.

In the interest of full disclosure, Warcradle Studios sent me these miniatures for review purposes. There are also links within this post that earn me a commission if you make a purchase from them. I identified those links as Affiliate Links.

With all that out of the way, let’s get into to this review of the Tempelhof Battlefleet Set for Dystopian Wars by Warcradle Studios.

Just like the Wild West Exodus minis that I reviewed earlier (link in the “Relevant Links” section at the end of this article), these miniatures by Warcradle feel special to open. Just look at that box.

Upon opening the box, we find the plastic sprues and resin parts.

Upon opening the lid, here is what I found.

Sprues of the Tempelhof Battlefleet Set

I took the sprues out of the box and took some pictures. This way you can get a good look of what is on the plastic frames. Here are those images.

Building the Ships of the Tempelhof Battlefleet

Building the ships is extremely straight forward. There are directions on the internet too. There will be links to help you find them at the end of the article.

All the cruisers go together in a similar way for the bottoms of the ships. The way you set up top of the ship (the loadouts on the rails) dictates the type of ship that you made.

Now, I want to voice out some criticisms about the Tempelhof Battlefleet Set. If you want to build the Reiter cruiser, you can build just one from the kit. There are not enough flak guns for two Reiters and the Carrier.

Also, If you want to build the short range Volsung, you can build two with the flak guns on top, or just one if you opt to place a radar on top of the bridge. Again, this is due to the plastic parts that the carrier ship uses from the plastic frames.

While you have a small limitation on which cruisers you can build two of in this battlefleet, the upcoming Imperium Support Squadrons box set (link further down in the article) will address this issue as there is no carrier to worry about in those sets.

Now, let’s look at the Destroyers.

Off of the plastic sprue, there are two ways to build the destroyers. You will find no limitation on which variant you can build. You can build four of either type.

Here we have the Tempelhof Carrier, which is the heart of the Tempelhof Battlefleet. It is a nice looking ship and, again, the details are crisp. As a note, this ship is resin and the flak guns and radar are all plastic. To put it together you will need super glue.

Once together, it looks really good.

A Closer Look at Some of the Details

These ships are really nice. Below are a couple of pictures showing off some more details in the miniatures.

Overall, I really like these miniatures and would love to look more at the Imperium fleet in the future.

Up next, we look at the completed battlefleet followed by some scale comparison images and related links.

Once you assemble the box, here is what you get. Again, you can choose how to assemble the ships differently. That means that if you buy this box set, you may end up with a different looking fleet than mine.

Once on the tabletop, this Dystopian Wars fleet can launch eight fighter crafts and four bombers. To represent the extra fliers, Warcradle gives you extra bases to stack your flight token onto.

If you build the fleet to launch all fighter squadrons, you can end up launching a total of 16 squads. If you load it up to launch bombers, you can launch a total of 12 craft squadrons (consisting of 8 fighters and 4 bombers). That is a lot of fighter power in the sky. I like it.

Now, let’s get an idea of how big these ships really are.

Below are scale comparison images to give you an idea of the size of these miniatures versus other manufactures.

First up, I have a galleon from Oak & Iron. The scale of that game is 1/600. The scale of Dystopian Wars is 1/1200. That means that if we downscaled the galleon to be inline with the ships from Dystopian Wars, it would be half its current size. That said, here is how they look on the tabletop.

If you are familiar with Oak & Iron, you will realize that these Dystopian Wars ships are fairly sizable. The galleon happens to be the largest ship in the Oak & Iron Starter Set. For more on them, there is a review linked in the “relevant links” section of this article.

For those of you not familiar with Oak & Iron, here are the ships with a Primarus Space Marine.

Before finishing off this review of the Dystopian Wars Tempelhof Battlefleet, I am going to share with you some links that you may find worth a look.

Below you will find related articles and links that you may enjoy. They all act to either give you more information about this fleet and Dystopian Wars or send you off to articles mentioned in this piece. Let’s start with how you can obtain these miniatures.

Shopping for Dystopian Wars and the Tempelhof Battlefleet

Like the models in this post and want to buy some for yourself? Here are some links for you. Of course, if you are lucky enough that your FLGS or favorite online retailer also sells these, you can buy from there too.

Below are sites that will interest you if you want to learn more about Dystopian Wars.

Below are some links to other stories on Must Contain Minis that might also interest you. The first two links are to articles mentioned within this post.

If you want to learn even more about this product, check out my video review over on YouTube. I also embedded that video below.

Thank you for joining me in my review of Warcradle Studio’s Tempelhof Battlefleet Set. Overall, it is a very pleasurable boxed set to construct. The ships have excellent detail and are fun to build.

I really like that you can make each of the ships in different ways, and my only criticism of the whole set is that there are some variants of the cruisers that you can build just one of from this box set (instead of two). The reason for this is that the flagship carrier – the Tempelhof – uses some of the same components (the flak guns and radar) as some of the cruiser variants.

That said, you can still build around it, and if you want more of the limited ship types (like the Reiter Flak Cruiser), you can look into the upcoming Imperium Support Squadrons boxed set [Affiliate Link]. That will be coming out later this month and it will give you a way to bolster your number of those ships.

What Monsters are in The Silver Bayonet?