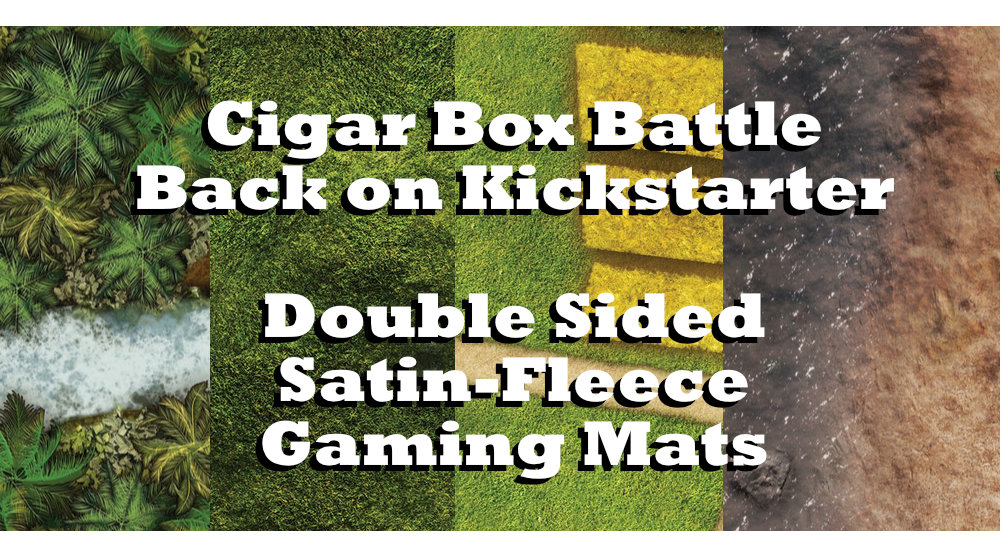 How good is the double sided fleece, I don’t know. I haven’t used it yet, but the guys at Cigar Box Battle state that it is their most premium material yet. That sounds good to me.

This time around, you can pair any of their designs together. In the last one, certain designs could not be used as you could see some of the colours through the mat if it was too light.

The mats run for $99 American plus shipping, but you get a discount the more mats you buy.

One of the very exciting things about Cigar Box Battle’s Kickstarters is that this is the platform that they tend to use to unveil new designs. This campaign is no exception. Below I share some of their new designs. As with the last times, they unlock the designs based on the value of Double Sided Satin Fleece Mats that they sell. Basically, the designs are stretch goals.

These mats above are but a small selection of the mats available in Cigar Box Battles’ newest Kickstarter for Double Sided Satin Fleece Gaming Mats. If you like what you see, be sure to check out their Kickstarter.

I have to say that I am excited to see Cigar Box Battle on Kickstarter again and I like their new designs. While I own a number of their mats already, I don’t think there is such a thing as too many of them.

In fact, I am a huge fan of the mats and love using them as backdrops for photographing miniatures and as terrain on the gaming table. As of today, Must Contain Minis has over 80 posts that feature Cigar Box Battle Mats in some way. You can check out those posts in my Cigar Box Battle Section of the website.

Hopefully you enjoyed this quick post. I will be posting on Bell of Lost Souls later in the week looking at some of their other designs. But really, just head to the Double Sided Satin Fleece Gaming Mats Kickstarter for more information.

Made in Canada Miniatures and Games