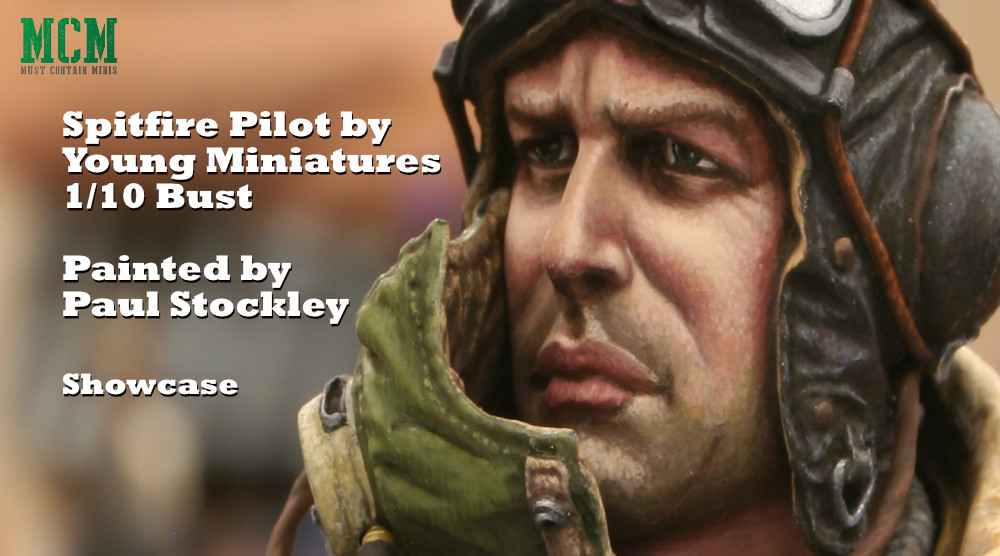 In this post, I take a look at something different for Must Contain Minis. For the first time, I am taking a look at a 1/10 Bust Miniature. This miniature is from the Sword and Brush 2019 painting competition and was painted by Paul Stockley. His amazing work on this Spitfire Pilot nabbed him the “Best Painted Historical Miniature” award for the show. I must say, I agree with the judge’s decision. The paint job is superb, and I find the work here very lifelike.

This model is manufactured by Young Miniatures.

Before taking a closer look at the miniature, I want to quickly discuss the Spitfire plane. The Spitfire served Britain throughout World War 2 as part of the Royal Air Force (RAF). After the Battle of Britain, this fighter became the backbone of the RAF. By the end of the war the British built more of these fighters than any of their other fighter planes.

It was a fairly good match for the Messerschmitt Bf 109E and used for a number of rolls from recon-photography to dog-fighting.

Now, let’s take a closer look at that pilot miniature.

Here is Paul Stockley’s RAF Spitfire pilot in all his glory. Paul painted this miniature up to an extremely high level of detail. We are going to zoom in on that detail a little closer later in the article.

I reached out to Paul to ask him for details on his model. Below are the details from tjhat chat.

Paul showcases his absolutely beautiful work on Instagram. This model above took him roughly 40 to 50 hours to complete. No wonder it looks so good!!! Skill, of course, plays a role too!

Paul does not do commission work, but from time to time, he might sell off some of his pieces. When asked what inspired him to paint this model, he stated, “I wanted to learn how to paint textures.” Looks like he figured it out! Check out the details in the straps and clothing on this model.

When asked if he plays miniatures games, Paul stated no. He just likes to paint Historical and Fantasy Miniatures.

Paul painted an RAF Spitfire Pilot to an absolutely amazing standard. This miniature was 1 of probably 150 to 200 miniatures entered into the Sword and Brush 2019 painting competition in Burlington, Ontario, Canada. I have a few posts to go up related to these models. The first was Dave Garbe’s Trollblood Mountain King.

If you like this miniature, be sure to check out Young Miniatures. They sell many Historical and Military Miniatures at 70mm, 90mm and 1/10th Bust Size. Perfect for painters out there.

Also, be sure to check out our Wrap Up Article gathering together every single Sword and Brush 2019 article that I wrote.