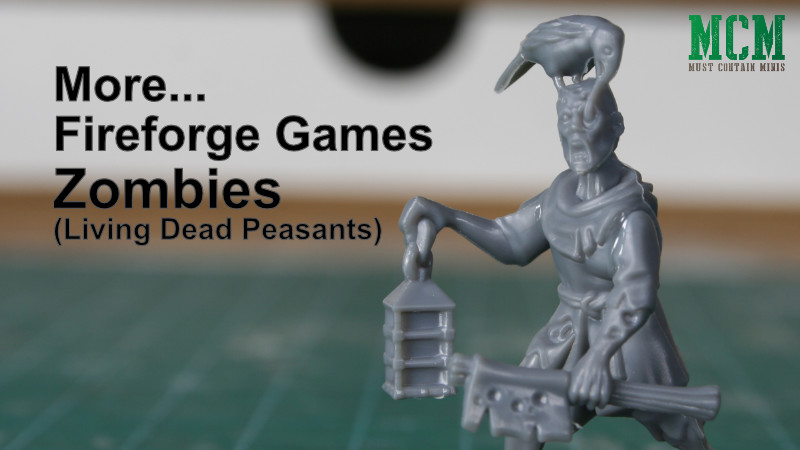 In my last post, I reviewed the Living Dead Peasants kit by Fireforge Games. This box comes with 18 Living Dead Zombies (Peasants) along with 18 square bases and 18 round bases. I used the round bases. This post takes the past one a little further looking at the 12 Zombies that I had not yet built and talks a little about the weapon options available on the Sprues. I also go a little into my experience of building the minis. In many ways, this is part two to last week’s review of the Living Dead Peasants by Fireforge Games.

While the other model kits for Forgotten World come with 12 models for infantry and 6 for cavalry, this model kit comes with 18 figures. As far as value, this is a nice kit. There are plenty of weapon options and a good number of figures. Buy a few boxes of these figures and you have a very large force of undead rabble.

Now, let’s take a closer look at those miniatures.

So Many Weapon Choices

In last week’s post, I showed an image of the kit’s sprue. Fireforge Games packed with 15 weapon options and a lantern. That is on all three of the sprues that come in the box. That gives a lot of variability out of just one boxed set. Almost all of the figures can be built with different weapon options because of this.

My initial review of these miniatures looked at six of the figures from this miniature kit. In this section of the post all of the other miniatures not in the initial review. Below are the remainder of the weapon options built.

Below are the three minis that I repeated the weapons options on. I did my best to keep them unique.

A Note About the Weapon Options

While building the miniatures, I found that the three piece weapons a little more difficult than I expected to build. It just took a little bit of figuring out for me to piece together how they fit. Instruction on which arms go with which weapons would be helpful. My guess is that these weapons had to be built as three parts because of the size of the weapons and details involved.

The weapons that came as three pieces (two arms and a separate weapon with integrated hands) includes…  The scythe, two-handed flail, pitchfork, and hoe.

Again, I would like to thank Fireforge Games for sending me these miniatures for review. They are currently available on their website for pre-orders. The expected shipping date seems to be for October. Overall, these are fairly nice miniatures.

During the Forgotten World Kickstarter, Fireforge Games set a group of Human Rabble which is basically the living version of these characters. Seeing these figures makes me even more excited to see what they do with the “Folk Rabble” miniatures. How about you? What do you think of these miniatures in today’s post?

As a note, you can also now see my review on Fireforge Games’ Living Dead Knights.

As a reminder, the first Fireforge Games Living Dead Peasants post for the Forgotten World contains scale comparison photos, sprue photos, and images of the first six models I built from the box. This post covers the other twelve miniatures that I built from the model kit.