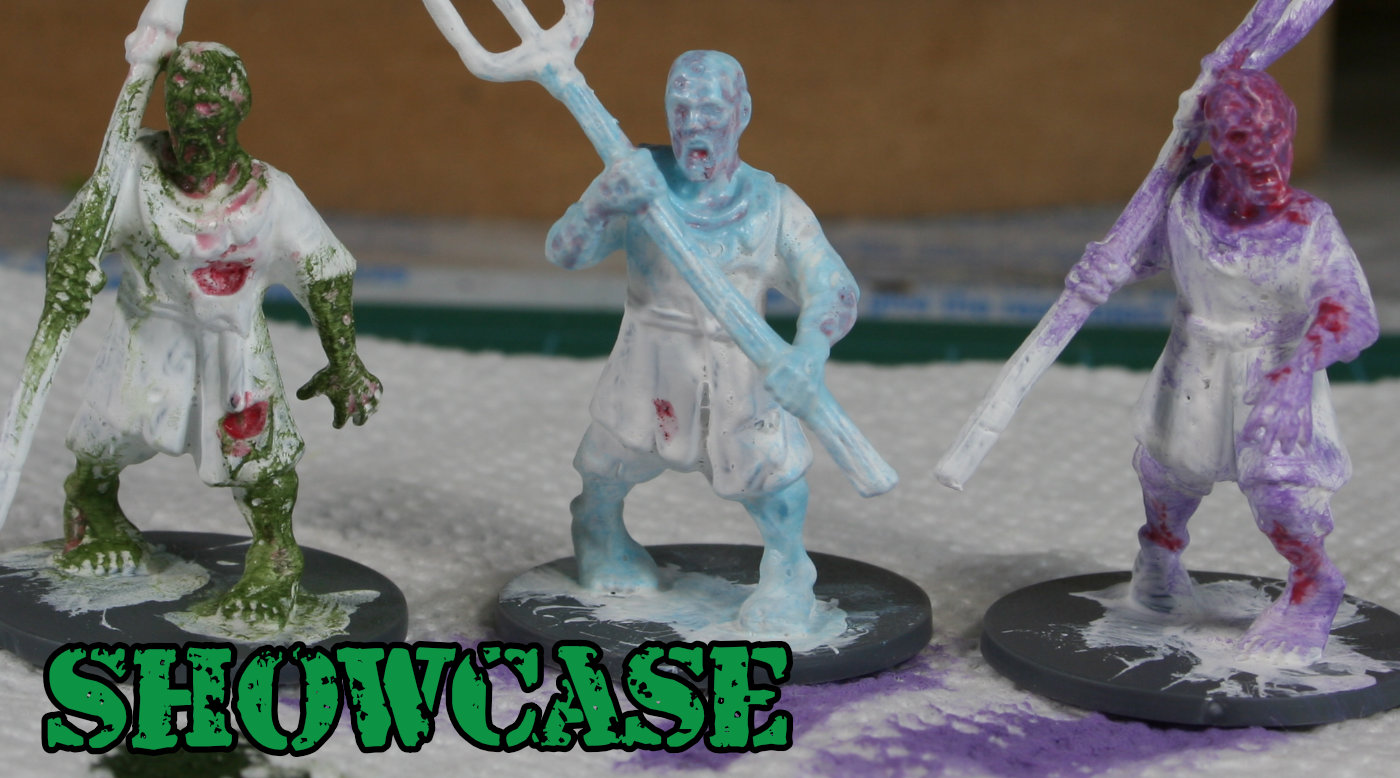 In this post, we take a look at my Living Dead Peasants made by Fireforge Games. These models come in boxes of 18 for roughly €20.00 at this time. For me in Canada, the models did take a little bit of time to get here, but I am very happy with how they look and the level of detail on the models.

After this post, I plan to do another taking an even closer look at the models. This post will talk about the Living Dead Peasants and look at my painting process with the models. I will list out the exact colours that I chose and go through my painting steps.

Special thanks goes out to Fireforge Games for sending me these models for review.

To start, I primed the miniatures with white Gesso. I use this when the weather is not nice and I don’t want to prime outside with my spray. Let’s face it, I live in Canada and the weather is not always conducive to working outside.

After that, I did three test models with different colours of flesh. The idea is to figure out the colour scheme for my undead mob of peasants.

You may recognize the pictures above before from my social media feeds. I took a vote from the readers for which colour to go with. The blue and purple were tied. Mrs. Must Contain Minis came up with the tie breaking vote. She said go with the purple because it looks like magical energy re-animated these models. So, I did.

The first step after priming for me is putting on the base coat. At this step, the models don’t look great, but it is just the first step in a process to some good looking gaming miniatures.

For the base colours, I used the following for the flesh.

For the clothing, I used the following colours.

For the other items on the miniatures, I used the following.

In retrospect, I likely could have waited on the blood effects until after the model was completed.

After base coating the models, the next step is shading them. To do this, I ran a coat of Citidel Shade: Agrax Earthshade across the entire set of miniatures.

Looking at these models, I figured they look good enough. Plus, they are supposed to be re-animated, so I figure it is okay if the colours are a bit darker. That said, I wanted to add more of something, so I decided to do it with BLOOD!!!

I placed the blood effect wherever there was a wound indent on the model, or wherever I saw a painting blemish that I wanted to hide. At this point, these guys look pretty much done to me. So I proceed to the next step.

At this point, all that is left for me to finish up the models is a coat of matte varnish. Some people say not to varnish the terrain on the base, but I have been doing so lately and am unbothered with the result.

Thank you for following along with this painting showcase. Personally, I like these Living Dead Peasants by Fireforge Games and I think they turned out pretty good. What do you think? Do you have any painting tips that you want to share? If so, please do so in the comments below.

Thanks goes out again to Fireforge Games for sending me these models for review.

For more about these Living Dead Peasants, please check out our review of them and second part of the review showing off even nicer pictures of the made (but unpainted) models. I plan to do one more showcase article of these miniatures in the future taking a closer look at these painted miniatures.

Frostgrave: The Wizard vs The Warden