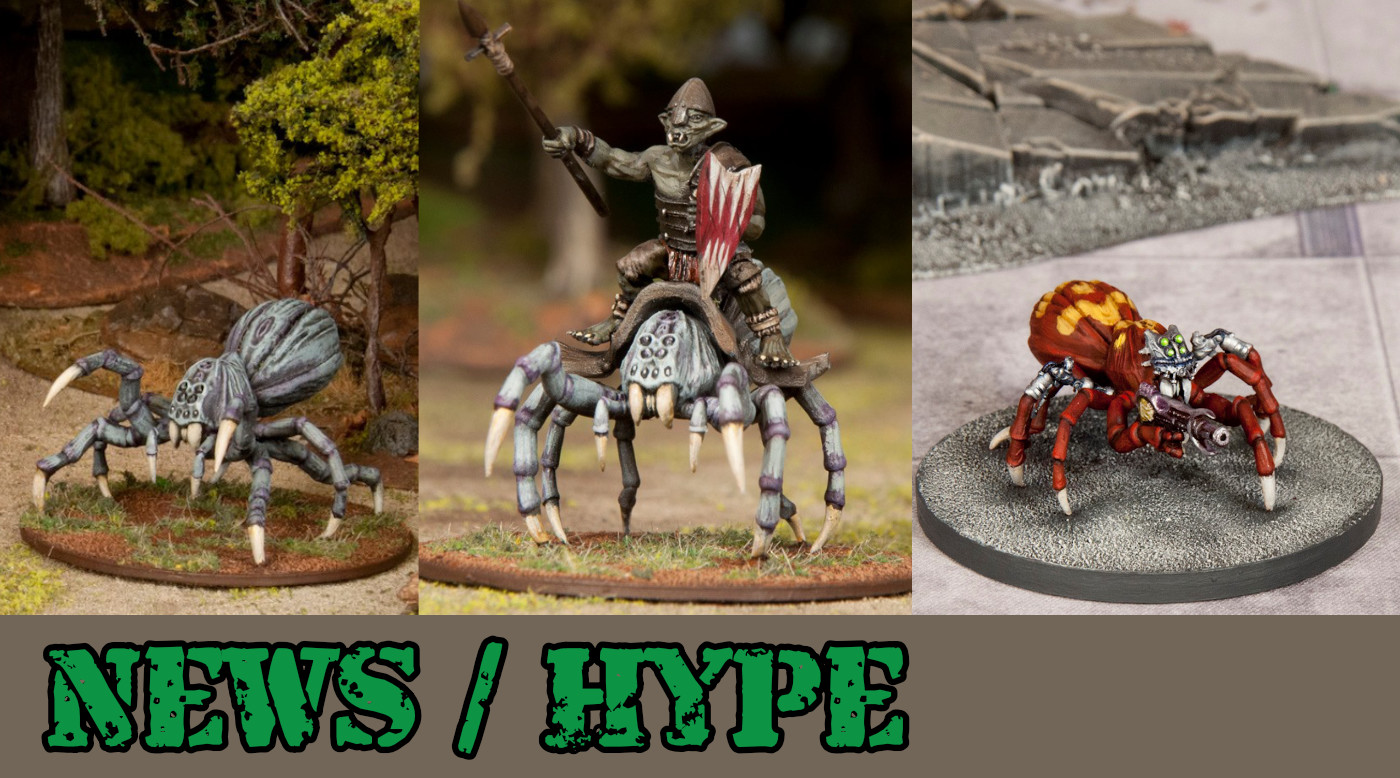 Recently I spotted some new preview pictures from Wargames Atlantic of some really cool looking spiders on Facebook. These miniatures were so cool, I just had to share. It looks like you will be able to make them as Generic, Sci-Fi or Fantasy models. If you are looking for miniature spiders, this post is for you.

As a note, all of the images in this post come from Wargames Atlantic.

If you have not come across Wargames Atlantic, let me tell you a bit about them. I first noticed them just over a year ago. At that time, they sold their Skeleton Warriors and Raumjäger Infantry kits. Not a lot of options, and some interesting choices being of one faction for two different genres. As time went on, they added new ranges and kits to their collection. The company is certainly worth a look if you haven’t visited them before.

Eventually they released this set of Fantasy Halflings for 28mm games. They look pretty good to me and the box comes with 40 figures. That is a lot for just $34.95 USD. I would say that this makes Wargames Atlantic the new “value” miniatures company to keep an eye on.

At this time, Wargames Atlantic set up six lines of figures. You can buy WW1 Germans, Fantasy Halflings or Skeletons, Ancient Persians, Dark Age Irish Warriors and two different Science Fiction kits. That is a vast variety of figures. They expand their lines rapidly and today’s post looks at a new miniature set that Wargames Atlantic started previewing.

Check out these spiders!

The Miniature Spiders by Wargames Atlantic

So far, we have seen a few pictures released of the Miniature Spiders by Wargames Atlantic.

I am not sure about you, but I really like the look of these miniatures. Wargames Atlantic then released some new images to make these models even more interesting.

Now, I don’t know exactly what will come on the sprues in the box – so in some ways this news piece is also a rumours piece. I think that these options below might come in add-on boxes, but you never know. It could come in the core box too. We will know closer to the time of release.

Again, we don’t know what is in the boxes yet. Maybe those sci-fi options are in the base box, or maybe they are an add-on. Time will tell. That Goblin Rider is certainly an add on or a separate kit in the works. My guess is it will be an add-on or a simple way to kit bash two kits together.

These images are so much fun. I am really looking forward to seeing what all Wargames Atlantic comes up with. They have been growing so fast!

To show the size of the spider miniatures, the company has this scale comparison image.

Hopefully you recognize some of the figures too so you can get a sense of the size on these spiders.

I have to say that Wargames Atlantic is previewing some really cool kits of late. I am very excited to see what they come out with as a company. They continue to release new kits at a very fast right and I think that speed is only going to increase. I think these guys are the new company to watch if you want quality miniatures at very affordable prices. If you haven’t checked them out yet, give them a look.

I believe these spider miniatures may be released for August.

Finally, I would like to give one more shout out. While going through the pictures on Wargames Atlantic, I noticed that a number of the painted miniatures and photos were by Matthew Leahy of Dr. Mathia’s Miniature Extravaganza.

Raise The Black & Blackbeard vs Maynard on Presale!