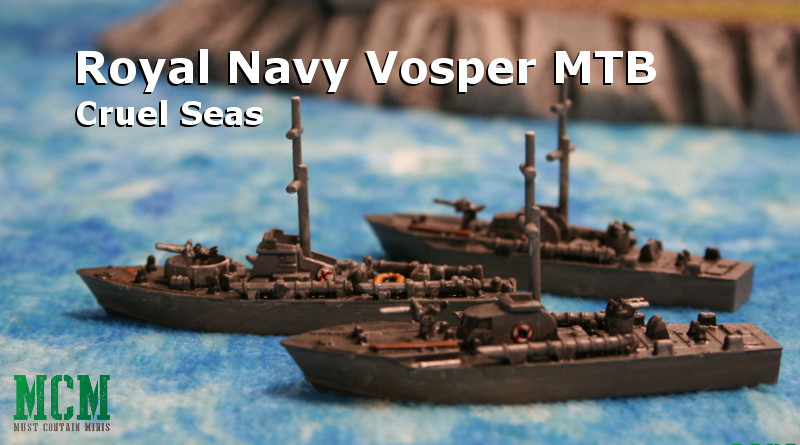 News of Cruel Seas I find very exciting. The game actually made it to number one on my Christmas Wishlist for 2018, but budget is not always there for me. As a result, I do not own a copy of the game, but do have the next best thing. Friends with their copies. In this post, we take a showcase look of some Royal Navy Vosper MTB (Motor Torpedo Boat) miniatures painted by Tony Stapells. As a note, Tony painted the six Vosper MTBs and four E-boats of the [amazon_textlink asin=’B07LBX2VHC’ text=’Cruel Seas Starter Set’ template=’ProductLink’ store=’mustcontainmi-20′ marketplace=’US’ link_id=’25afd813-5d85-4fed-b082-f604125d4287′] very quickly the night before I took the photos.

One of the nice things about painting naval units is that they paint up way quicker than land units, so if you want to get into something quickly, this game might be worth a look.

Now, let’s take a look at these ships.

The British Royal Navy made use of Motor Torpedo Boats to help keep its seaways open. These crafts engaged enemy E-boats and submarines alike as well as other ships and aircraft. The British had two makes of the Vosper MTB – a Type I and an Type II.

Both ships measured in at 73 feet in length and could travel at up to 37 miles per hour. The British armed them with Torpedoes (4 for the Type I and 2 for the type II), a 20mm Oelikon Cannon (seen here as twin-linked) and two Machine Guns. On top of this, the Type Two was also armed with a 6 pdr gun at the cost of those two torpedoes.

Now Tony did a very quick paint job on these miniatures, but they turned out quite good.

As an interesting note, after the war, the British Navy converted and sold these boats as house boats.

These boats are 1/300 in scale, which is in line with 6mm miniatures. The PT Boats in real life were roughly 80-feet long and 20-feet wide. Those were bigger than I was expecting, but still not nearly as big as the large warships of the day. The German ships were even bigger. Below we have a size comparison photo of the German E-Boat, the British Vosper and the American PT Boat.

If you want a different angle on these boats, be sure to check out our post about the American PT Boat.

Hopefully you enjoyed this quick showcase of the British Royal Navy’s Vosper MTB. It is a cool looking ship and Tony Stapells did a good job of speed-painting these guys up.

Next up is a showcase of the German E-Boat.

Note… I used a gaming mat provided by Cigar Box Battle as the backdrop for these photographs.

The Walking Dead: All Out War – Eye Candy