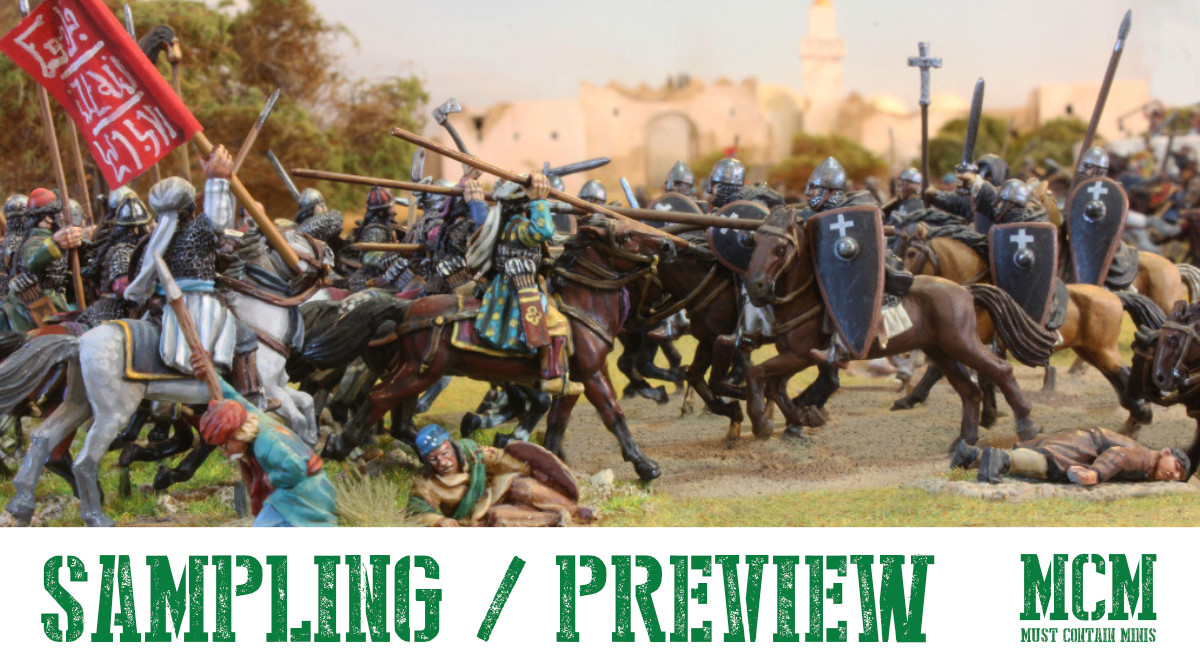 In this quick post, we take a look at the armies of Lion Rampant (Second Edition).

To start off, there are no true army lists for Lion Rampant. You can take whatever units you want. That said, there are a number of sample 24-point army lists in the book to help guide you in ideas to represent your favorite historical (or fantasy) armies. The game itself focuses on the Dark Ages to Medieval Ages for their theatres of war. The game is intended for 28mm miniatures on a 6′ by 4′ table but can be played on larger tables or with 15mm figures.

Your standard warbands in this game consists of 4 to 10 units with 6 miniatures (for mounted units) to 12 miniatures (for standard infantry) each. That means that your typical 24 point armies could have 24 to 120 miniatures in them depending on what you field. The sample army that we do the math on in this post has 48 miniatures in it.

Now, let’s take a quick look at the sample armies within this book by Osprey Games.

Within the Lion Rampant 2nd Edition rulebook there are 15 pages of historical armies. These are suggested lists, but you can take whatever you want into the game as long as you meet the points limit. The book itself covers many theatres including…

On top of these Historical settings, the book also comes with some extra example lists for Legendary Warbands. These are fantasy armies. This includes Robin Hood, The Sheriffs Men, and the Knights of the Round Table. For something even more interesting there are two “Old School Fantasy” Armies that look to be inspired by Tolkein books (The Hobbit and Lord of the Rings).

These last two lists don’t replace what is in Dragon Rampant, but they do add a Fantasy inspired way to play Lion Rampant.

If you are into army building, Lion Rampant: Second Edition gives you a number of units within the book. There are 22 pages of units and you can take them into any army. You have 24 points and work them how you want to.

Despite that fact, there are some suggestions on how to build specific warbands to represent nations during certain ages of time. Below is a sample page from that section of the book. Again, your typical mounted units come with 6 figures and most infantry units come with 12.

As a note, the leader does not count as an extra model. It represents you and can have extra skills attached to the model too. Let’s take a quick look at one of the armies above to figure out how many models you would need to field the list. The Dark Ages Europe Bretons would need 48 miniatures to bring that suggested 24 point army to the tabletop.

Going to the other theatres, some of the interesting armies include Border Raiders, Later English (from Edward III onwards), and even Revolting Peasants. If you prefer Eastern Europe, there are even lists for the Mongolians, Russians, Teutonic Order and the Hussites.

The standard rules do not cover the early age of gun powder, but there are rules in the optional units section for Handgonners. On top of that there are optional rules to further differentiate Camel units, Chariots, Pikemen, and Slingers. Whether you use those rules or not is up to you and your opponent.

Thank you for joining me in this sampling post of Lion Rampant: Second Edition. In some ways it is a preview, but my goal with this article was to give you a little more information about what is exactly in the book, so you can better make up your mind as to whether it is something that interests you.

To me, this book represents a vast expansion and improvement over the the first. The layout is nicer and there is a lot in this book. The second edition takes the game from 64 pages (in the first edition) to 208 pages. That is 144 more pages of artwork and content.

If you were well versed in the first edition of the rules, there are two pages near the back of the book that detail all of the changes from the first edition to the second edition. This is a very nice touch by Osprey Games and something that I wish more companies followed their lead upon.

Special thanks goes out to Osprey Games for sending me a copy of the book for review purposes.