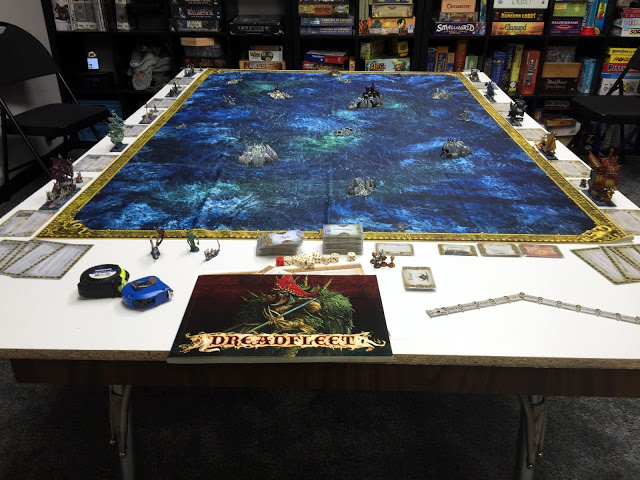 This week, I visited my friend James and played his copy of Dreadfleet. Check out this set up. Amazing!!!

Now, this was my first time playing Dreadfleet and I found it to be a fun and exciting game. James hadn’t played in a year or two so he was very happy to get the game to the table. As he should be. Look at how well he painted all of these miniatures.

James allowed me to choose which side to play as and I chose the Dreadfleet. The object of this scenario is to race forward and to pick up treasures. The player with the most treasure at the end of the turn countdown wins.

I hope that my readers enjoyed this Battle Report. I have wanted to play this game for years, and when James gave me the offer, I jumped at opportunity. Since he knows I like to dive full-in and use all the units right off the start, James chose out this treasure hunting scenario to use all of the Ships and Cogs in the box. Overall, I was very pleased with my gaming experience. The game is fun and simple enough, but still has a large degree of strategy. This strategy aspect came very apparent to me when James brought the Heldenhammer behind The Bloody Reaver and took shots clear through the ship. It was devastating. I also had The Curse of Zandri on fire and taking heavy damage before I did much of anything to James’s fleet.

While strategy got James off to a great start, luck also plays a big roll in this game. This luck factor was evident when I one-shot killed his Flaming Scimitar with my Black Kraken. There is also a lot of randomness to the events and wind direction in this game. Whether the events drawn create skulls raining from the sky (it is GW afterall) or a Sea Monster in front of an enemy vessel, randomness is the great equalizer to skill. This means that a new (or young) player can play and there is a chance that they could win no matter the skill gap. That said, skill really increases one’s odds in winning.

Overall, it was a very enjoyable game and I would play it again if it was offered. James did mention to me that the missions in the book are set up in a campaign story and that we were playing one of the missions from closer to the end of the book. No matter what one thinks of the game Dreadfleet, there is no denying that it is gorgeous. GW put some great production values into this game. It is a shame that it was recalled and discontinued.