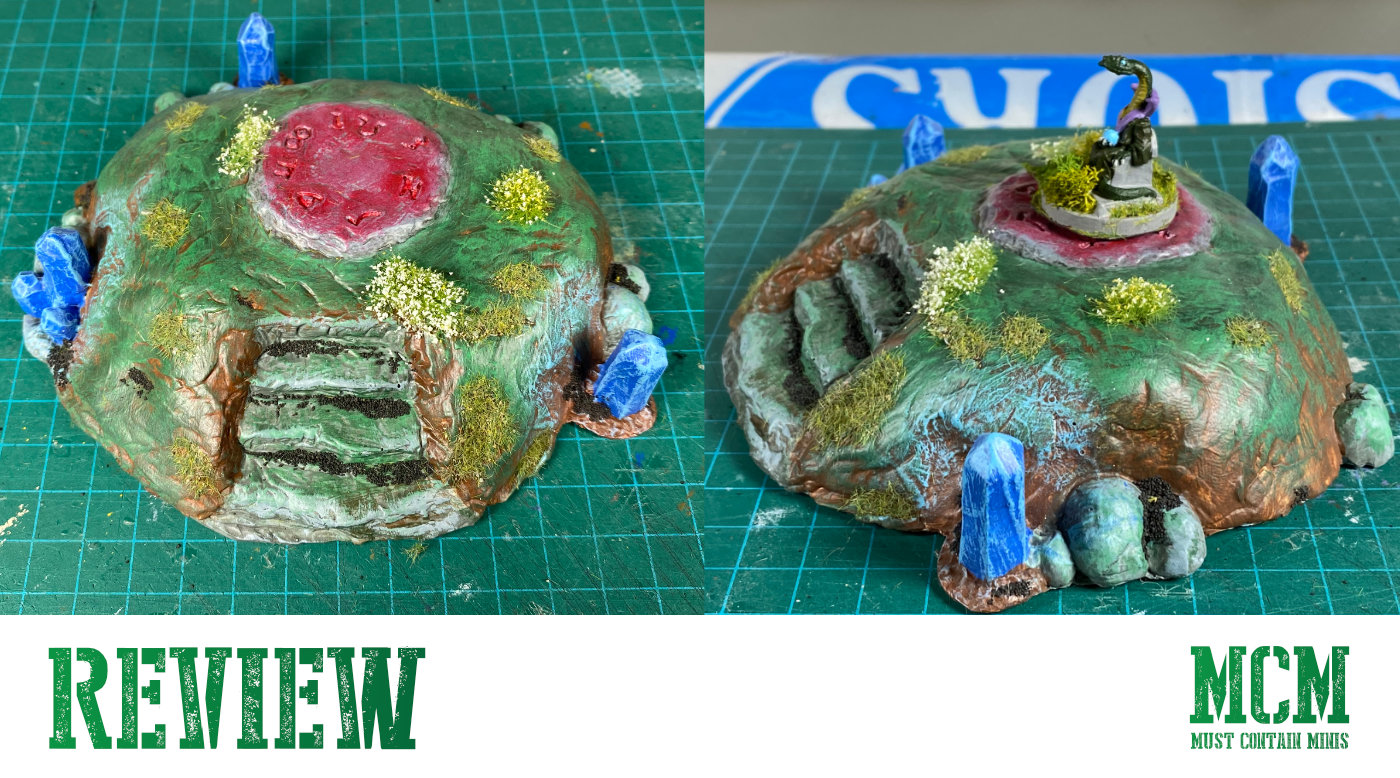 Honestly though, this piece of terrain will work with any setting where you want to incorporate magic. In Sci-Fi, it is a teleport / transport platform into a strange alternate reality. In Fantasy, I could totally see this mound being used as a power circle or as a summoning circle.

Now, let’s get into it and examine this piece of terrain by Crucible Crush.

Disclaimer: Crucible Crush gave Must Contain Minis this piece of terrain for review purposes. While I accept review products, I am in no other way compensated for my posts and reserve the right to give positive and negative reviews.

You may recognize this mound from just over a year ago. It was part of my Birthday haul from 2019. Now, is a good time to show the completed piece. Below is how it started.

I primed the mound with white Gesso and painted it using craft store paints. This one turned out really good!

Above is how I finished the mound. I showed the piece off on Facebook and got various feedback. The main advice was that the center of the model is too clean compared to the rest.

So I tried to jazz that up with some blood effects. I figured, let’s try making the rune symbols bleed into the middle of the circle.

The rivers of blood idea did not work out, so I repainted the top. I then decided to make the runes glow red without going for the blood effect. That worked better.

I posted the work to Facebook again and the suggestion came to add terrain materials to this painted piece. So I did…

So I went in and added some static grass, flowers and scenic coal (as dirt) to the model. Here are pictures of the finished terrain model.

Now, let’s view the model with some figures on it.

Below I have the mound with some 28mm miniatures to give you a sense of scale for this summoning mound / transport platform.

To me, this is a very flexible piece of terrain. It could be used for a large number of settings. That said, it is built for Black Sun. As such, let me tell you a bit about that game.

Black Sun is a 28mm Weird Vietnam War Skirmish Miniatures game. In it, you play in an alternate dimension where Cthulhu horror elements mix in with the soldiers of the Vietnam War. If this sounds like something you are interested in, check out this starter deal below.

The Adaro miniatures that this starter comes with look awesome. I own some of them myself. They are basically Deep Ones from the Cthulhu Mythos.

I love those models. Also included in the line are many terrain pieces. Of which, this mound is one of them.

This Summoning Mound / Teleport Platform sells for $18 Canadian. That is just under $14 American at this time. A pretty cool piece of terrain for sure.

Thank you for joining me in this 28mm terrain review of a transport platform, or summoning mound, by Crucible Crush. Special thanks goes out to them again for giving me this product for review.

In this post, you saw the model unpainted and a bit of the process I went through painting it up. You also saw the model with 28mm miniatures and learned about the Black Sun Miniatures Game.

Before signing out for the night, I want to let you know that Crucible Crush is busy on Kickstarter with their Flint and Feather Contact Campaign. If you like their stuff or want some 28mm French or English miniatures from the time of settling America, this campaign is worth a look.