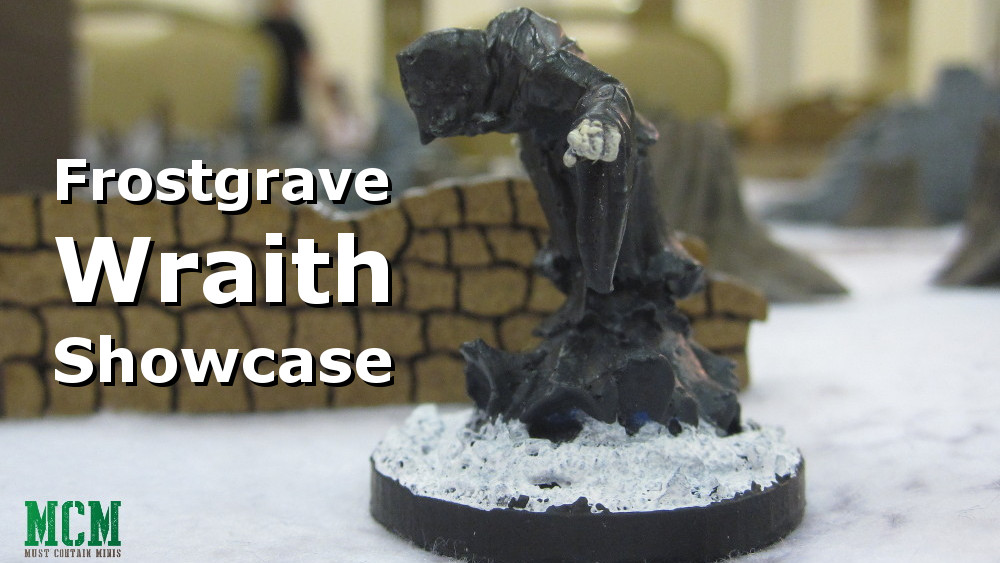 In this post, I quickly showcase a Frostgrave Wraith that I painted. The miniature itself is by North Star Military Figures and is official to Osprey Games‘ Frostgrave setting.

As you may be able to guess, this was a very quick model for me to paint. I coated it with a base-layer of black followed by dry-brushing with white and a grey-black. I used the grey-black for the highlights on the black cloak and the white for the fingers on the wraith.

The MDF base is by Six Squared Studios and I made the snow effect on the base using railroad coal for terrain. I painted the coal with a base layer of black, followed by blue (for ice) and a ton of white on top of that.

The Wraith in Frostgrave

The Frostgrave Wraith represents a ghost (or other type of etheral undead being). These undead beasts are hard to kill and lots of fun to unleash on a Frostgrave table.

While their basic stats are respectable, they are not fearsome. What makes them really dangerous is that they cause double damage and are immune to non-magical weapons.

I like to unleash these on low-level Wizards in demo games to give the players something else to worry about other than the other players. Player-versus-player is good, but in a demo setting, I prefer to have the environment being one of the main points for players to contend against. This reduces the number of critical attacks players might dish-out to the other players.

Sometimes, a monster like this even encourages players to team up against the monster instead of fighting each other. The reason for this is because I don’t give the players enough heavy spells or magical weapons to deal with these ghosts.

The lack of weapons also leads to interesting uses of fog and wall spells by the wizards around the table.

Hopefully you enjoyed this quick article about the Frostgrave Wraith. It was quickly painted by me and makes for a nice miniature on the tabletop.